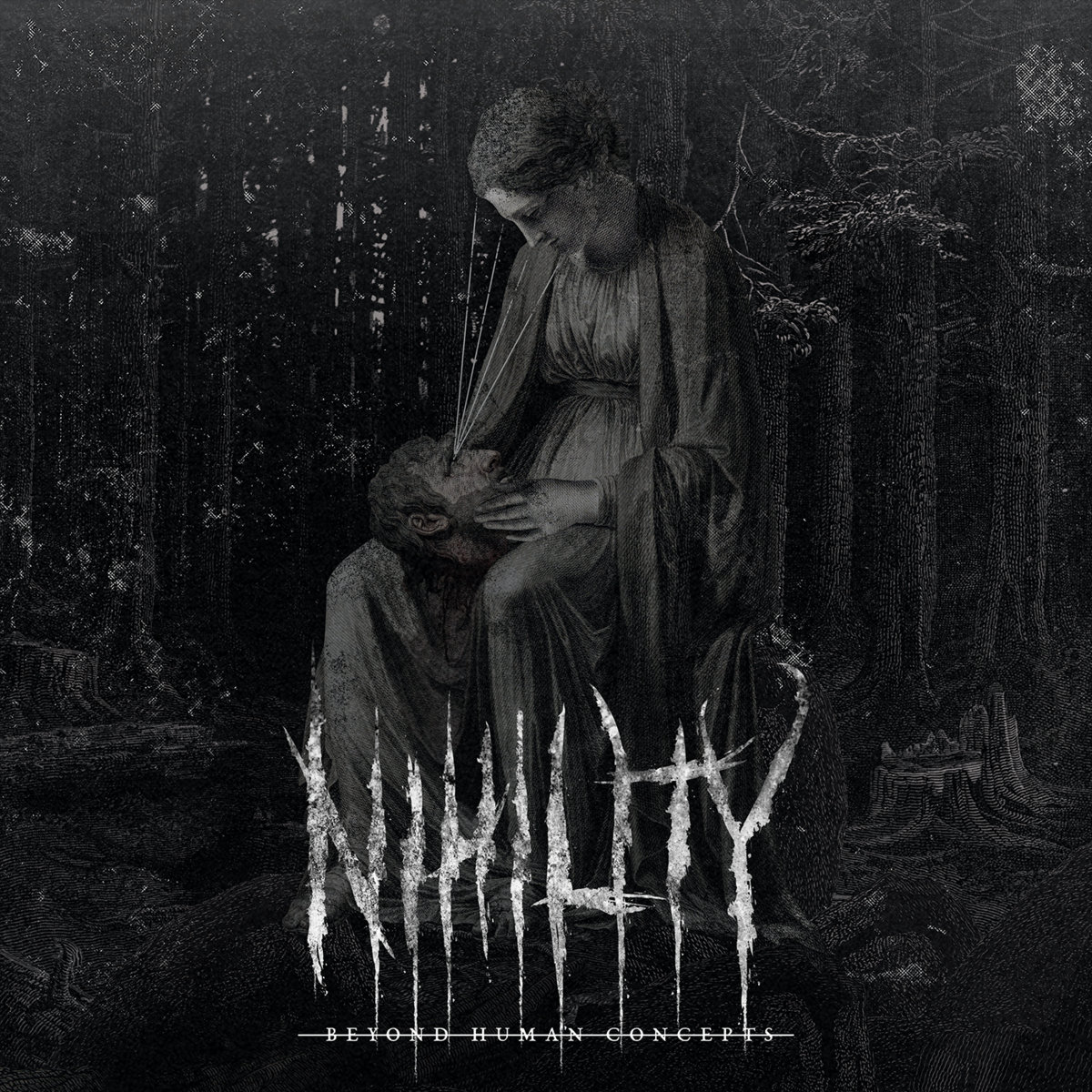 Beyond Human Concepts
by Nihility

Portuguese blackened death metal band Nihility enters their first decade of existence with their sophomore full-length Beyond Human Concepts, which comes two and a half years after their debut.  While it may have taken a solid seven years from formation to get their first effort to listeners, the band has clearly wasted little time in further refining their take on blackened death and old-school death metal that bring in quite a few European and American influences.  With equal emphasis on brutal mid-tempo riffs and pummeling faster arrangements that bring in some darker melodies, Nihility does fall into some patterns but there’s still plenty here to draw fans of these styles in.

One of the things I appreciate about Beyond Human Concepts is its compactness, as rather than going for the drawn-out build-ups or extended filler that some blackened death is known for, they hit hard and then move onto the next idea.  That’s not to say that there isn’t some room for some unexpected solos or dips into other variants of death metal, but for the majority of the record Nihility remains laser focused on mid-tempo grooves and blasting.  Stylistically it falls somewhere between Belphegor and mid-period Behemoth crossed with some Vader and American old-school death metal, which allows for some darker melodies to be injected in alongside the brutality.  It helps that the production values are polished without sacrificing intensity, giving that immense feeling of Behemoth circa Demigod or more recent Hate albums while also allowing the details of each song to stand out.  Admittedly while there are subtle changes from one song to the next and it’s clear the band is trying out different things, the regular shifts between blasting and slower passages starts to feel a bit too familiar by the end.  This does lead to some repetition and some moments that blur together, but this is helped by the fact that there’s no fat on any of these songs and it’s an easy album to listen to from beginning to end in under half an hour.  While the blackened death metal assault is technically proficient and clearly quite polished, I did find myself remembering the moments where Nihility went outside the box the most.  The almost proggy solo that appears without warning in “Conflicting Vanities” and dips into darker introspective melodies on the title track showcase that the band can branch out even further, and I’d like to hear them expand upon some of these elements in the future.

Although the instrumentals may incorporate a lot of black metal, the vocals fall almost entirely onto the death metal end of the spectrum.  Mário Ferreira has the type of guttural approach that seems to tower above the rest of the band and fills out the remaining low end, which makes an immediate impression.  There are some higher screams thrown in at key points courtesy of guitarist Renato Barbosa, but for the most part the gutturals steal the show and make it clear that no matter where Nihility goes stylistically, they won’t be lacking in brutality.  This is where the material reminds me a bit more of American death metal, as the approach gives off vibes of Cannibal Corpse and Suffocation while also offering some of its own nuances.  It’s also worth mentioning that unlike some of the others out there going for this approach that the performance actually shakes things up regularly, and Ferreira is clearly well utilized throughout Beyond Human Concepts.

Fans of Behemoth and Hate as well as bands like Vader should find a lot to like about Nihility’s sophomore effort, and while it does still fall into some repetitive patterns the moments where they start to go outside the box hints at further potential.  If they can vary up the attack just a bit more while expanding upon the hints of melodic and progressive elements that come out during the solos, I think album number three will have the same intensity but prove to be a bit more memorable.  But even with that being said, if I’m in the mood for equal amounts of bludgeoning and darker atmospherics this is a great option to start 2022 off with.  Beyond Human Concepts is available from Vicious Instincts Records.