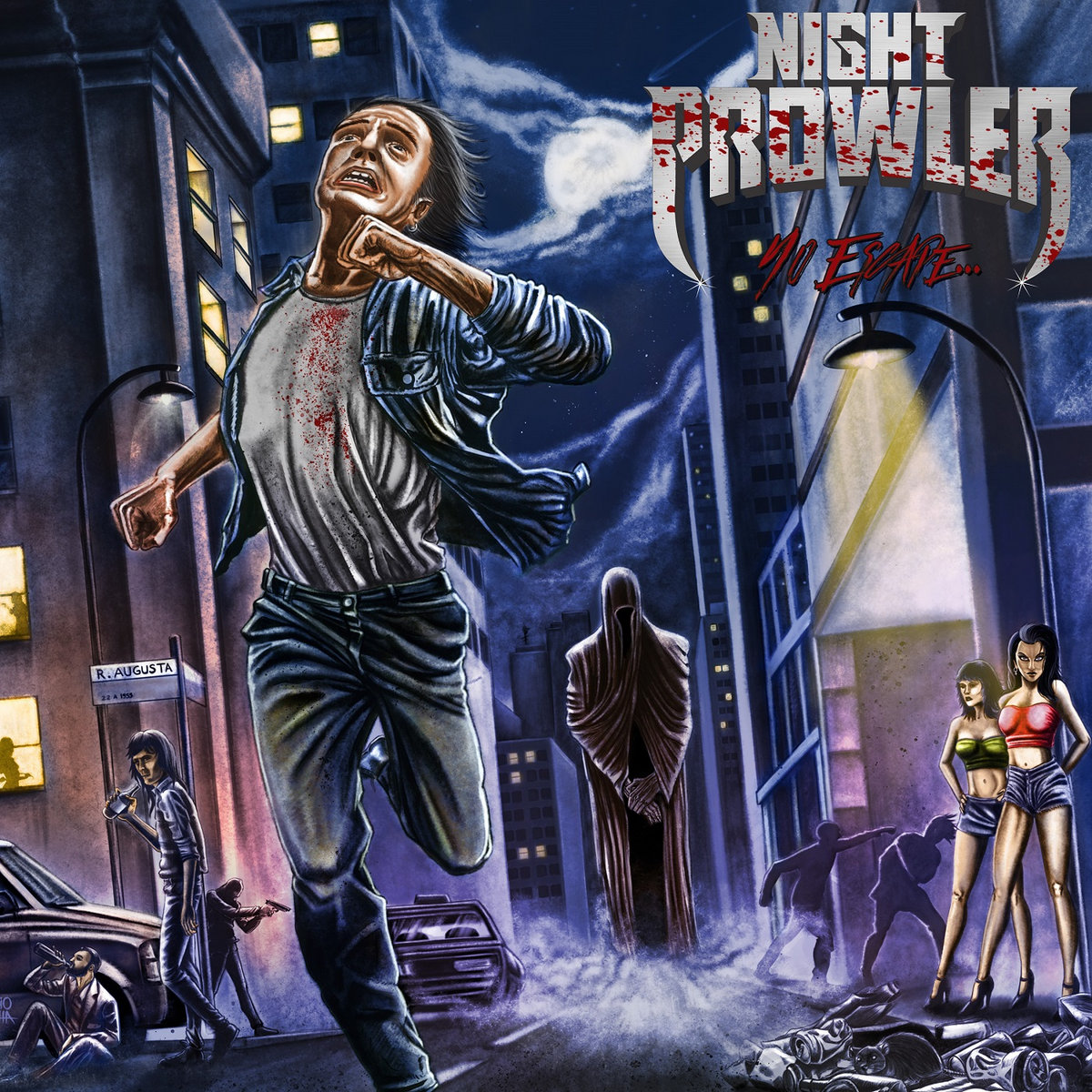 No Escape...
by Night Prowler

Brazil has nearly as much heavy metal and hard rock as other countries, but not as much of it reaches the audience of international ears despite prominent streaming platforms so it’s always nice to get a peek into what some of the Brazilian artists out there has to offer.  One of my latest discoveries is Night Prowler, who formed in 2017 and released their debut full-length No Escape… on CD a year later via Kill Again Records.  Not content to let this album go under the radar, Dying Victims Productions has reissued it on vinyl and digital formats giving much wider distribution than before.  With a sound that falls somewhere between NWOBHM and the glam rock/heavy metal of the mid to late 80s, this is a fun record that showcases a true love for everything from that decade.

Night Prowler doesn’t immediately give away all of the different metal and rock styles that its material encompasses, as “Runner 97T” kicks things off with synths and guitar melodies that sound like they could be ripped from the opening theme songs of a number of different 80s television shows.  From there the instrumentals move between up-tempo tracks that bring in equal amounts of speed metal, NWOBHM, hard rock, and even some glam rock style ballads where the band really ups the sleaze factor.  It’s a fun combination of styles that often makes No Escape… feel like a celebration of how diverse that era of metal and rock was, with the guitar work often capturing just as much Def Leppard and Dokken as it does the aggressive edges of Saxon and Iron Maiden.  When it comes to the heavier side of the spectrum, “Never Surrender” and “No Escape” have a scorching edge to their guitar work while still having leads that stick with you upon repeat listens, while “Night Prowler” slows things down significantly and offers up glam melodies in all their glory.  However, despite Night Prowler really hitting that sweet spot on some songs there are some that just don’t stand out from the pack, making them come and go without fully making an impact.  It’s still consistent from beginning to end, but there’s still from for these guys to go from pure worship of the 80s into their own unique take on these genres.  I’m also not always crazy about how the drums seem to pop out in the mix and distract from the other instruments at times, and while this may be a personal preference on my part I suspect some of you may feel the same way.

Vocalist Fernando Donasi makes an immediate impression on “Make It Real” with singing that’s melodic but able to move between some lower registers and falsettos, bridging the gap between that much softer glam rock style and the soaring nature of heavy metal.  Donasi changes his approach depending on where the rest of the band is going, incorporating some gruffer and rougher edged singing when the riffs head into full-on NWOBHM territory, only to fully mellow out for ballads like “Night Prowler”.  “No Escape” even brings in some backing yells that channel the classic era of thrash as well.  Where some of the other bands out there falter with vocalists that have very limited range or can’t hit all the notes they’re trying to get to, Night Prowler clearly has some talent in their ranks and the versatility of Donasi’s performance goes a long way.

There are some really catchy, stand-out tracks on Night Prowler’s debut that will make this reissue one that fans of both glam metal and NWOBHM will want to have in their collection.  But some of the material doesn’t quite hit the mark and a few production quirks dampen the impact for me, leaving room for these guys to grow and really put their stamp on heavy metal next time around.  Since the original 2018 release the group has switched drummers and been working on new material, so hopefully it won’t be long before we hear more from this promising act.  No Escape… is available digitally and on vinyl from Dying Victims Productions and still available on CD from Kill Again Records.