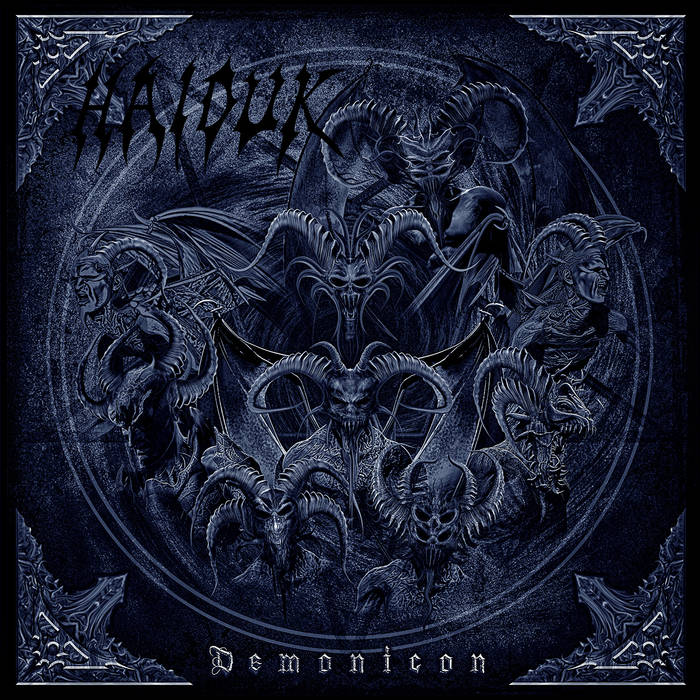 Ever wanted an NES soundtrack comprised of thrashy metal music?  You may have just gotten your wish granted.  Haiduk is a one-man blackened death and thrash metal project from Calgary, AB fronted by Luka Milojica.  While it is not an instrumental project, the guitar is still the star of this show.  Take some Absu-sounding riffs and feed them through some compression and MIDI effects, then just crank up the volume and enjoy the results.  Full speed ahead.

Demonicon has an old-school feel mixed with a few new-school touches.  Even the cover reminds me of Morbid Angel's Seminal Altars of Madness.  In this same vein, the vocals are vile death grunts from the beyond.  These pop up quite sparingly, which only furthers their impact when they do decide to make an appearance.  No production tricks: just an all-out assault on vocal chords and ear drums.  It's ugly in all the right ways. But as I said, it's with the guitar that Demonicon truly shines.  Fierce tremolos rattle forth with unbelieveable speed.  The sheer velocity and interesting tone make everything sound like Slayer on fast-forward.  These blackened melodies maintain the entire duration of the album, yet no two sound exactly alike.  There is certainly a level of consistency, but each track carries its own weight to create a fun experience from start to finish.  Between this and the unstoppable drumming, I was banging my head for the full 30 minutes.

Haiduk, all I have to say is you are one talented dude.  It's always impressive to me when a single person can put together an entire album on thier own, but to do so with such a level of both technical marksmanship and enjoyability is bizonkers.  I look forward to hearing more of your thrash-heavy black and death metal in the future.  For the rest of you, you can order the album from his website link above, and also download the below two tracks free from bandcamp.