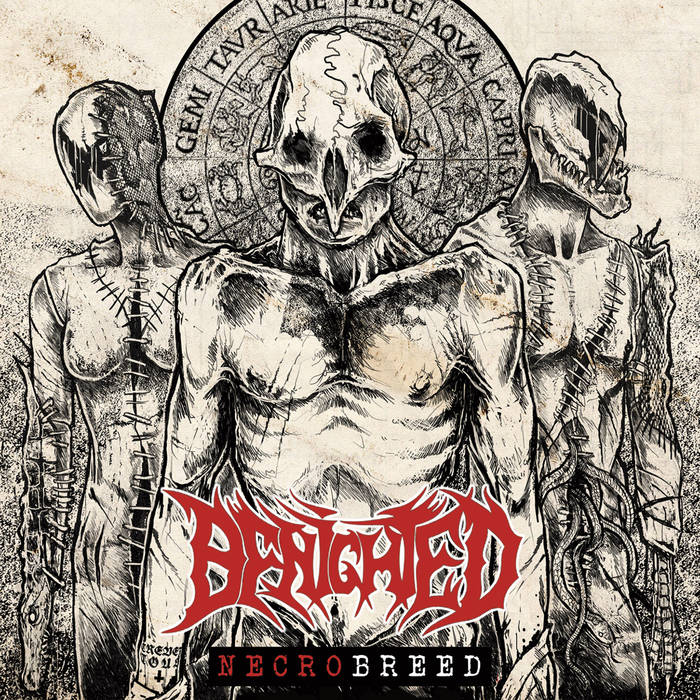 What I Like: Goddam, those vocals do pack a punch.  Much like Sven of Aborted, they are a split personality nightmare with an even broader range.  Gigantic leaps are made back and forth between impenetrable grunts, eardrum-shattering pig squeels, blackened wretches, and even some tasteful Breeing.  And how often do you hear brutal vocals in French ("Versipellis")?  This alone is enough to make me want to slaughter everything within a 10 foot radius, but the other band members do plenty to keep the rage fuel flowing.  My cup runneth over.  You gotta love that dirty bass tone on "Cum With Disgust." The guitars and drums are the perfect union of death and grind, rivaled only this year so far by the upcoming Lock Up album.  So much pummeling, brute force behind these inhuman blastbeats and malicious tremolo melodies.  And when the band makes the sudden transition to a chord-driven Dying Fetus riff, I melt like butter under a blowtorch.

What I Don't Like: It's Retrogore, 2017 edition.  That's a really broad and minimizing generalization, but the point being one could certainly criticize this album for lacking much innovation.  I'm not inferring that this is some sort of copycat.  Rather, they have a very similar sound.  So if you're like me and loved Aborted's last release, you'll love this one too.

The Verdict: Necrobreed will leave a bloody mess of viscera where you once stood.  I type this with the one remaining finger I have left to type with.  Somebody shovel me to the hospital.  Full stream available HERE until it goes up on Bandcamp.