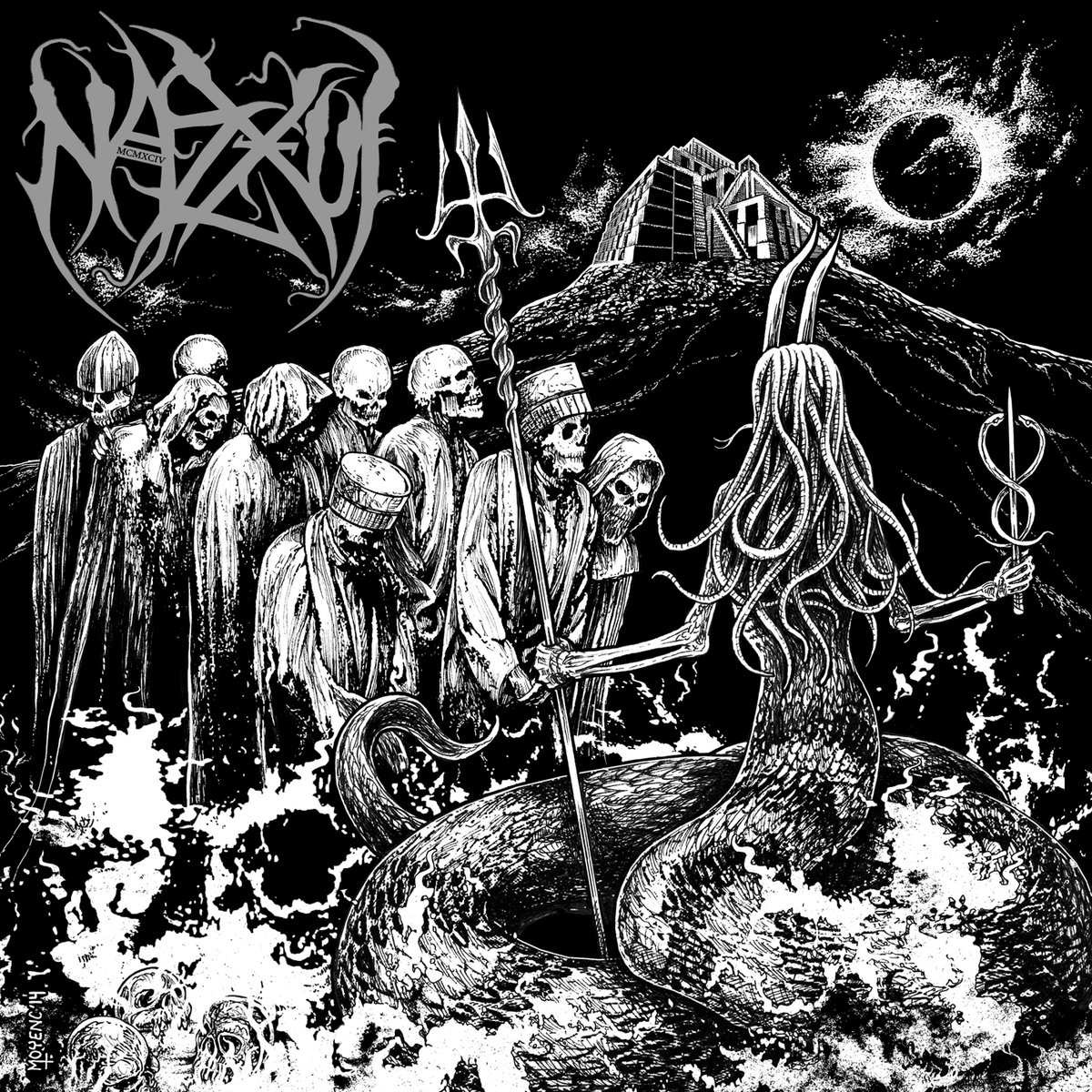 While releases from Australian black metal band Nazxul have often come decades apart, their particular balance of symphonic and aggressive elements has made their material stand out in the underground.  1995’s Totem and 2009’s Iconoclast are where the bulk of this praise has come from, with a handful of smaller releases filling in the longer spans of time.  Since the latter came out it was followed by a split and EP in 2010 and Nazxul has been quiet ever since, with many of its members contributing to a variety of other Australian metal bands.  That silence has been broken with this year’s Irkalla, which bridges the gap between the murkier/dense approach of Totem and the more polished and grandiose sound of Iconoclast.  It’s a far shorter listen than its predecessors, but Irkalla still brings plenty of sinister atmosphere and darker melodies that help it to make an impact.

If the majority of your exposure to Nazxul came in the form of Iconoclast, you’re likely to find that while Irkalla has some similar elements it is an altogether different beast.  There are still immense keyboard melodies and symphonic elements that recall Emperor at their finest and create a haunting landscape that hovers over top of the more aggressive foundation, but similar to Totem the drums are much more prominent and the recording has a murkier and dense feel to it.  In some ways it’s reminiscent of the layered murk and grime that New Zealand’s Vassafor offered on their latest full-length in 2020, as this is noticeably more aggressive and takes just as much time to get into despite running for a little over half an hour.  For those that are brand new to the band, a good comparison would be Demoncy, as Nazxul provides a similar sense of consistent tension and dread in how they weave together their blackened arts.  Opener “Divine Death” makes a strong first impression with chilling melodies and blasting that’s so dense that it might take a few times through to make out all the finer details, and the rest of the album follows suit.  There are some slower interludes where some truly twisted and nightmarish vocal and instrumental work makes its way in, and this goes a long way in giving Irkalla some real staying power.  Admittedly the more aggressive and straightforward nature of the blasting does result in some similar sounding moments, making this an album better taken in as a whole rather than as individual songs.

The vocals are where Vassafor and Demoncy once again come to mind, as they come through as raspier screams and whispers that have a serpent-like presence and seem to weave in and out of the layers of sound.  For some the performance might feel a bit too buried, as the screams were a bit more prominent on the last album and here they sometimes come through like an additional piece of the instrumentation rather than a separate element to focus on.  “Rising Storm” and “Stygian” bring some chanting and other distorted pitches that are downright unsettling and have the same impact as the loudest moments on the album.  It may prove to be an acquired taste for some, but the more atmospheric and unnerving approach to the vocals contributes to the impact the material has.

Although Nazxul’s third full length doesn’t quite hit me in the same way as Iconoclast did years ago, it’s still another worthy effort that naturally bridges the gap between their mid-90s and late-2000s output.  The individual moments do sometimes feel a bit similar, but given the compact nature of the recording this is an album that you can easily go through multiple times as you attempt to peel back all of its layers.  If you’re looking for a recent example of how to do symphonic elements in black metal without losing the aggression and tension, this is a perfect effort to dive into.  Time will tell if we hear more from the band following this effort or if they retreat back into the shadows for an extended period of time, but this should hold listeners over for awhile if they do.  Irkalla is available from Seance Records.