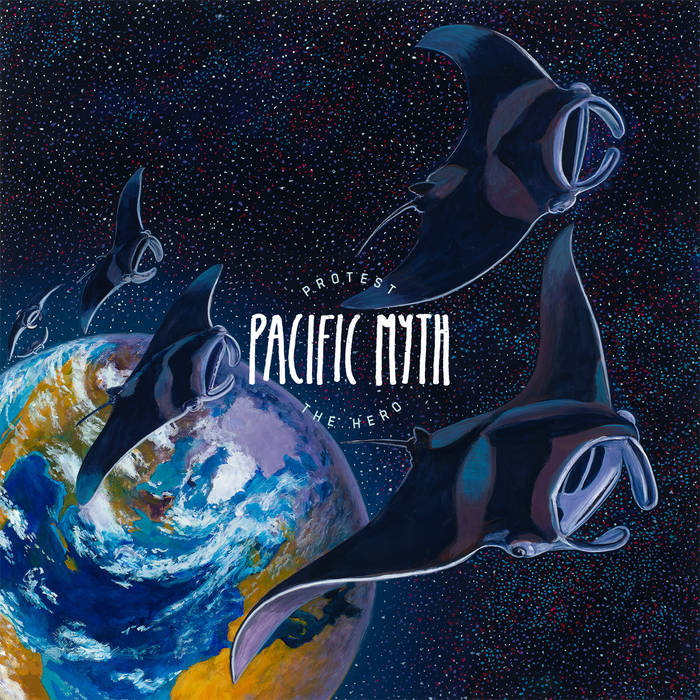 Pacific Myth
by Protest the Hero

Protest the Hero took an unconventional approach to their new EP, Pacific Myth.  Harnessing the power of Bandcamp, the band released a song every month along with extras via a subsription service.  It was a move that many seemed to enjoy, but it discouraged me on one level: I still like to collect physical CD's from certain bands, PTH included.   They have been teasing such a traditional release for a while, but today sees the album released to non-subscribers digitally and in physical form for the first time.  The band's previous outing, Volition, raised the bar quite high and may actually be one of my most-listened albums of the past few years.  Can Pacific Myth live up to the hype?

It's pretty close.  Starting from with my favorite material, "Caravan" feels like Protest The Hero's baby of the bunch.  My favorite track on Volition, and possibly their entire discography, was "Mist," and this song reaches for that same epic melodicism.  It's a lengthy undertaking for the band at nearly 9 minutes, but that runtime is justified with the usual technical hooks and catchy, emotional vocals that have always been the band's draw.  It's a beautiful track that also features their first foray into some symphonic additions.  I sing along to the chorus every time.

"Tidal" and "Cold Water" are the other standouts to make my top three.  The shifting pacing and vitality present in the drumming are instantly engaging, further aided by Rody's always personal, stream of thought lyricism and dramatic delivery.  And of course, more riffs.  Riffs for days.  These guys never seem to run out of ideas with some of the most engrossing and mathy hooks on par with other fan favorites like Coheed and Cambria, Periphery, and Sikth.  The final dueling guitars on the former track nearly bring me to tears.  Protest The Hero have always been top tier when it comes to evoking feelings in the listener.  They can get me as choked up as the prelude to Up.  Don't judge me.

The remaining tracks won't leave you cold either.  The basswork gets really impressive, and this may be the most screaming I have heard from the band since Kezia.  "Ragged Tooth" feels like it falls a little short of the other tracks for some reason, but it's still far from a bad one.  And while "Cataract" didn't quite make the top three, the riff that kicks in at about 0:43 is among the most memorable moments of the EP.  There is absolutely everything to love about this release, except for the pricetag.  Justifying $12 (digital) for 6 songs by adding instrumental versions I didn't ask for doesn't feel right.  However, with the actual runtime hitting nearly 36 minutes Pacific Myth isn't all that shy from some of my favorite LP's (As The Palaces Burn was only about 2 minutes longer).  As a longtime fan, I still hope to pick up a CD copy soon.  The quality these guys put out is worth it, but I'll be hoping to find a slightly better price.