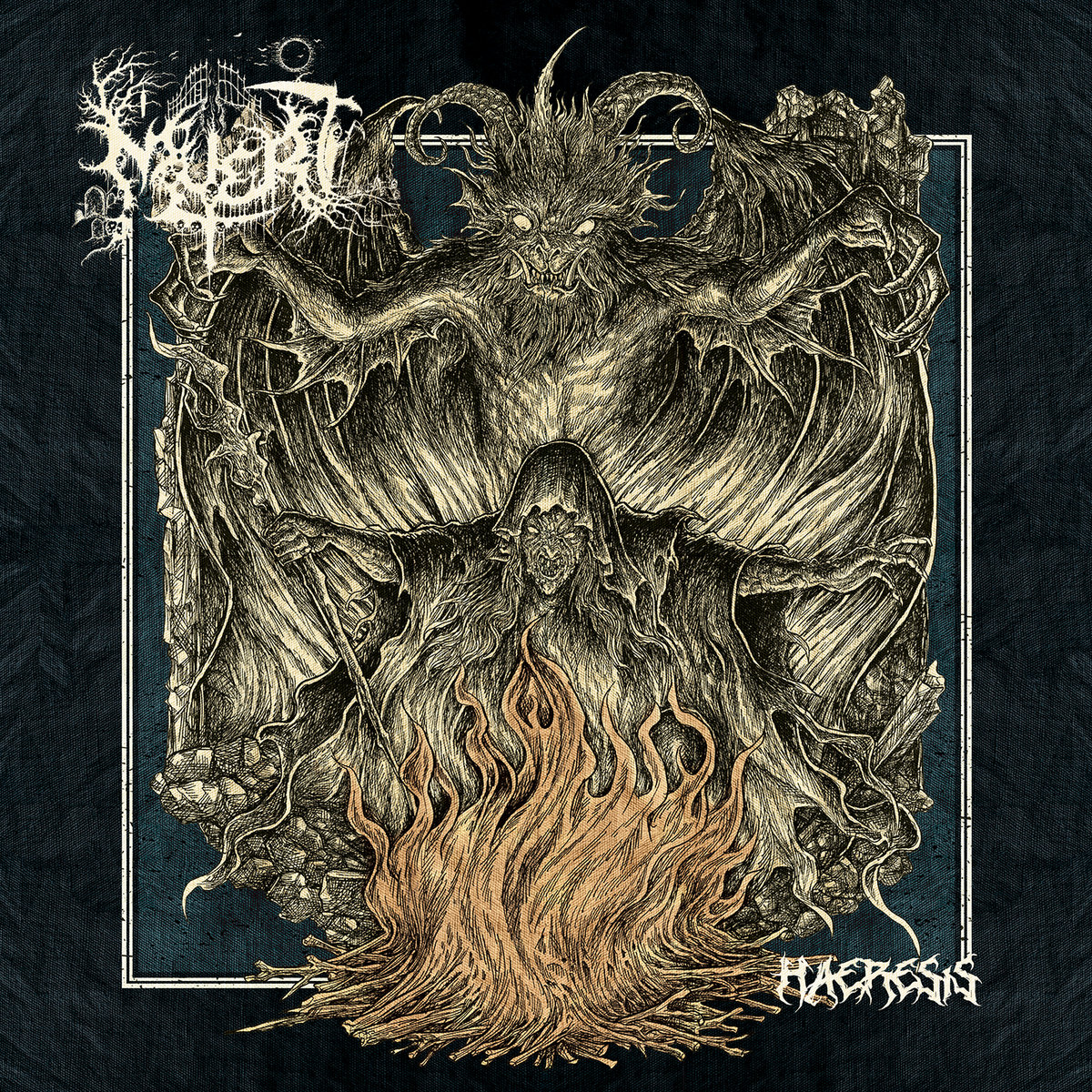 Formed by members of Cryfemal and Death Above in 2010, Spain’s Muert originally started off playing raw and cold second-wave black metal, but over the years their sound has evolved considerably.  2017’s Ye Canariae Abezan, the band’s third full-length, saw them bringing in more elements of death metal alongside production values that injected more of that genre’s dense tonality.  Fast forward some four and a half years later and the lines have become even more blurred, as Haeresis delivers chaotic and warlike blasting with a noticeably more muscular sound.  Although the material does blur together at times, this is still a welcome change in style for the group and delivers that same aggression and darkness that fans of black and death will appreciate.

Muert wastes no time in delivering brute force on Haeresis, as opener “Metal ¡Enajenación!” immediately starts blasting away with dense walls of guitar and drum work that bring to mind bands like Blasphemy, Beherit, or Archgoat rather than some of the Norwegian second-wave influence showcased earlier in their career.  There’s a fairly even split between black and death metal throughout the material, with some songs opting to stick with extremely low tuned and dense riffing for their entirety while others let colder melodies seep back into the mix.  At times the sheer amount of power behind the instrumentation and triumphant, warlike cadence also reminds me a bit of earlier Bølzer, and there’s a similar level of polish to Muert’s attack.  The duo very rarely lets off the gas for the entire thirty-seven minutes Haeresis spans, only slowing down for a brief moment on the longer tracks to allow that filthy, murky atmosphere to further seep into the recording.  As is often the case with these more bestial and unrelenting types of albums, the constant blasting does result in some of the songs blurring together.  But tracks like “La Maldición de Laurinaga” and “Las Brujas del Bailadero de Anaga” shook up the formula enough to stick with me, and when combined with the shorter run-time this makes Muert’s latest still able to stand out from the hordes of other bands trying for bestial black/death.

If you’re familiar with Muert’s previous material or any of Cryfemal’s output, you know that Ebola’s extremely raspy and over the top screaming left an impression.  My first taste of this came courtesy of Cryfemal’s 2016 album D6s6nti6rro, and while there are some similarities here the approach is a bit lower pitched which suits the added death metal influence.  You still get some higher screams that seem to pierce through your speakers, but the lower ranges give off an even more violent and powerful presence that manage to stand slightly above the instrumentals in the mix.  Bands that mix black and death metal together are often focused on breaking the listener through continuous brute force, and the vocals play just as big of a role in that as the other pieces do.  Ebola’s ability to vary up the delivery and shift from higher to lower pitches also keeps the performance from feeling too one-dimensional, and this small nuance makes a difference.

Since their last full-length Muert has been transitioning from the black metal of their early days into more of a black/death metal hybrid, and this latest release finds them transforming even further.  Although the approach is a familiar one, the way the riffs seem to ebb and flow makes this one a bit more interesting than your average bestial, sloppily played material of the same type.  While it wouldn’t hurt to trim some of the individual song lengths in the future to avoid repetition, I still see Haeresis having some staying power.  Haeresis is available from Immortal Frost Productions.