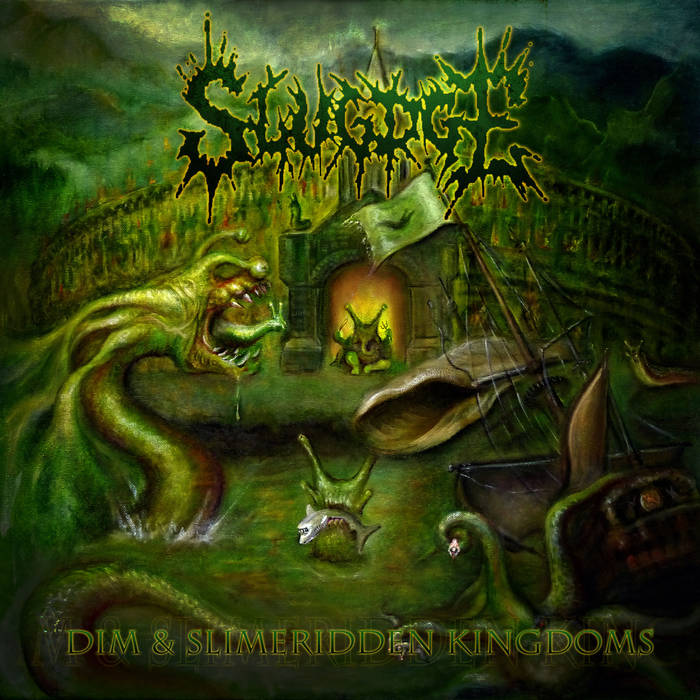 Out of the cool and damp places of Lancaster, lurks Slugdge. Despite the clever moniker, this is not a sludge band. Slugdge doesn't do much slow. It's just that the lyrics happen to be about gastropods. Yes, this is slug metal. Want something a little different today? How often do you hear someone screaming about cellular mitosis?

If Mastodon were a death metal band...specializing in slugs...they might sound a bit like Slugdge. Certain aspects of the guitar tone and thematic style take me there. Songs like "Suffering Quahog" further cement the comparison during the proggier parts. The clean singing and wave-like riffs are right out of Leviathan. But Dim and Slimeridden Kingdoms oscillates between this and Black Dahlia Murder melodeath.

Vocals vary in style. The throaty snarls on "Spore Ensemble" break up the deeper death growls showcased throughtout; sometimes layered for great effect. Killer drums after the interlude on this one too: insane attacks of toms and double bass. But the guitar shines just as bright. Lots of neoclassical hooks and solos all over the place. Check out that infectious riff on "The Toxic Salts." Unstoppable, mucus-filled mayhem.

If you want something of another pace, the electrofied tapping fest of "The Chapter..." is a total thrill ride and likely my favorite song on the record. The chords here definitely djent a bit as well...and always in a good way. The harpsichord outro to the opening track is a nice touch as well. But it's in the last two songs where things take a prophetic turn. That chant (German, I believe?) closing out the album is hauntingly serious...and remember we're singing about slugs here.

So if you like slime, and goo, and all things squishy; you need to check this album out. Something about it made me hesitate at first, but after hearing waves of praise and the sheer speed and ferocity that is the title track, this was a no brainer. I glanced at the price tag expecting to pay premium for this...but fortunately it's up to us to make that choice. It's definitely worth it.