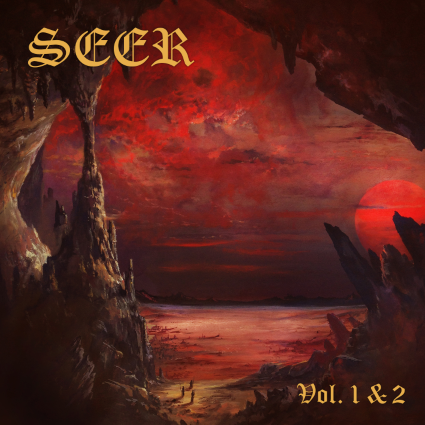 Mountain of an Album

Hailing from Vancouver, British Columbia, Seer was formed in the fall of 2014. Art of Propaganda is proud to present the full-length debut of Canada's Seer, Vol. 1 & 2. Reportedly a "product of their environment," the band draws inspiration from the Pacific Northwest, turning it into massive walls of doom and sludge. This is the rumble of mother earth below our very feet. Seer's lyrics tell of an "ever-expanding narrative journey across bleak and barren realms, boundless primordial landscapes, and even further into the celestial beyond."

Put a Clutch vinyl onto a record player...then sit a rock on top of it before pressing play. That's Seer. Bluesy, southern-fried riffs played at a sludgy, stoner doom pace. What Seer lack in speed, they make up for in girth. The sound here is HUGE. Bass tone so thick and meaty you could slather it in barbecue sauce and add a side of mashed potatoes. For the most part, the resulting tone summons images of mountains and deserts, but at times (i.e. "Haunter") things go a little Meshuggah while the generally lofty, introspective vocals degrade into a blackened screech. Someone took some bad peyote.

But returning to the clean singing, comparisons could be drawn to anything from Fugazi to Monolord. The effective use of reverb furthers the effect of these songs sounding like truly expansive, progressive forces of nature bounded only by 360 degrees of horizon. Drums pound like thunder and cymbals crash like lightning. The entire composition like standing in the middle of an enormous sandstorm. It's really quite breath-taking, right down to the indescribable moodiness of "Aeons."

Honestly, I wrote the majority of this review while listening to the album the first time. It's just that powerful. This is doom done just the way I likes it: heavy, a little edgy, and just as long as it needs to be. I am no hater of long songs, but I think sometimes less is definitely more and the goal shouldn't be to drag things out beyond what is necessary. Seer knows how to create something big while neither adding too many bells and whistles nor repeating themselves ad nauseum. Seriously, buy this album. It was my first favorite of 2016 at the time of writing.