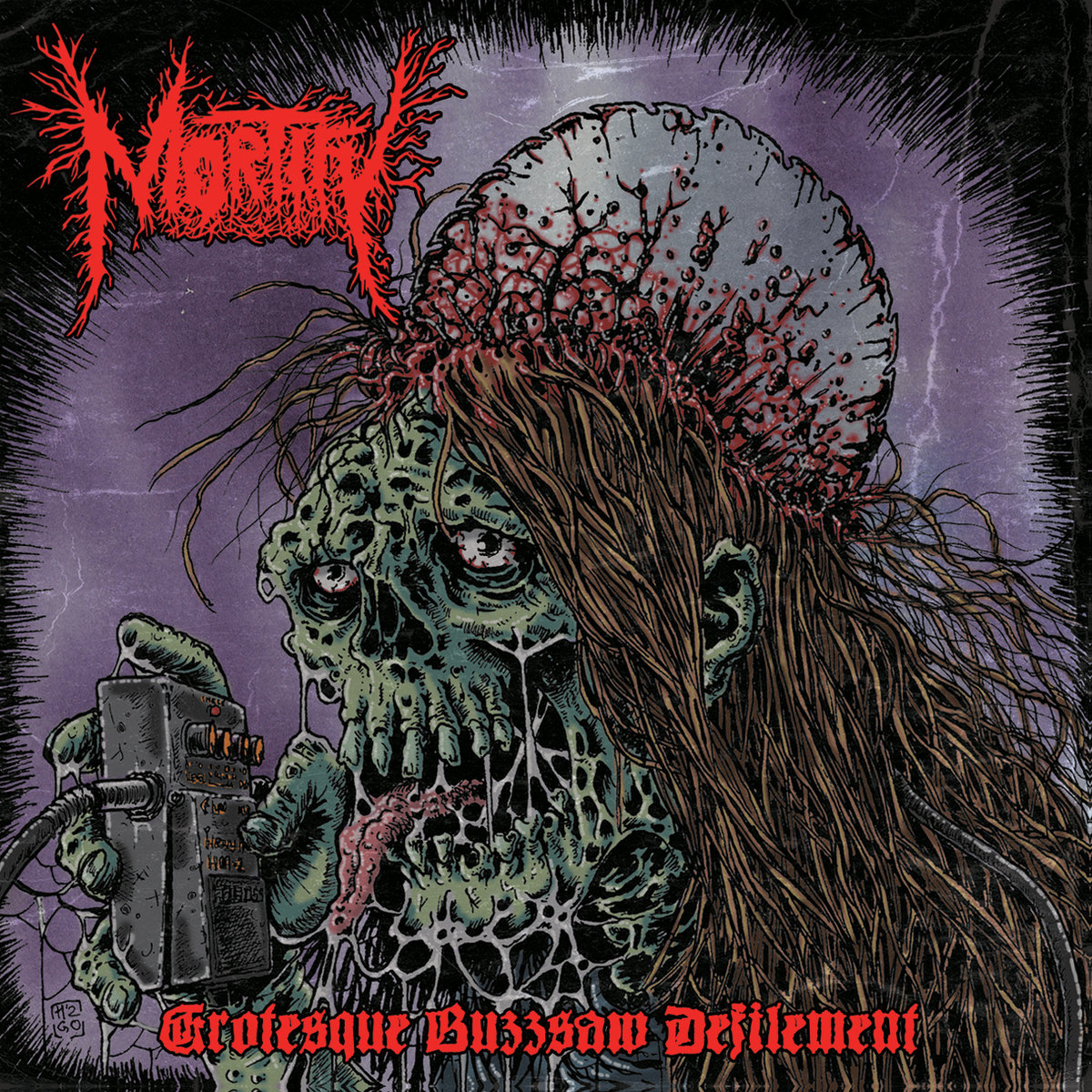 Formed in 2017 as a collaboration between two musicians from the Japanese metal underground and American vocalist Adam Jennings (Sick/Tired, Disrotted), Mortify offers up short and fast paced grindcore with a twist.  The twist is that while much of the songwriting follows the type of frantic and unrelenting blasting and slower sections one would expect, the band goes for that HM-2 buzzsaw sound that is more commonly associated with Swedish death metal.  Each of their releases has expanded upon this idea, with this year’s Grotesque Buzzsaw Defilement offering up thirteen tracks of gore and madness in under ten minutes.  While not every individual moment stands out, this is still a fun and razor-sharp blast to the face that grind and death metal fans should appreciate.

Similar to their debut Stench of Swedish Buzzsaw in 2019, this EP goes for concise and heavy hitting tracks that are all a minute or less in length.  A few more approach that minute mark this time around which does give the instrumentals a chance to switch things up a bit more frequently, and there seems to be an even greater balance between pure grindcore and death metal.  The first thing you’ll notice is that familiar buzzsaw tone and slower, zombie-like lurch that eventually leads into some blasting in the last few seconds of “Flesh Creep”.  From there it’s off to the races as Mortify rarely lets off the gas, delivering chunky mid-tempo grooves that wouldn’t sound out of place on your favorite 80s or 90s Swedish death metal album/demo alongside unrelenting blasting.  In the middle of all this the group throws in a cover of Agathocles’ “No!” which sounds just as brutal with the buzzsaw tone.  As you might expect from a release filled with thirty second to minute long tracks, there are some that are going to run together, but given just how gory and heavy the sound is it’s still damn fun to listen to on repeat.  With that being said though, there are some moments on Grotesque Buzzsaw Defilement that touch upon a more unique sounding blend of death and grind with the HM-2 tone and I think Mortify still has some room to further expand upon that and truly stand out from the rest.

Compared to the full length, Adam Jenning’s vocals have gotten even more distorted and inhuman sounding.  His main pitch is a low growl that distorts and gurgles in way that bring a number of horror movies to mind, along with some higher shrieks that shake things up.  I’ve always been a fan when grind vocalists do this back and forth from low to high pitches as it sends the energy levels through the roof and that’s exactly what Mortify is able to do throughout this EP.  They’ve also included a handful of movie samples that tie in well with Jenning’s horror-leaning vocals, and overall the performance is as maniacal and distorted as one could possibly want.

I do think there’s some room for Mortify to take this crossover between Swedish death metal and early grindcore even further, but they seem to be working towards this with every release and this EP is fun to listen to on repeat.  They nail that HM-2 tone and bring the filth and grime, channeling the obsession to gore and horror that a lot of these Japanese acts do so well.  Now if you’ll excuse me, I’ve got more buzzsaw to get back to.  Grotesque Buzzsaw Defilement is available from Horror Pain Gore Death Productions, Headsplit Records, and Obliteration Records.