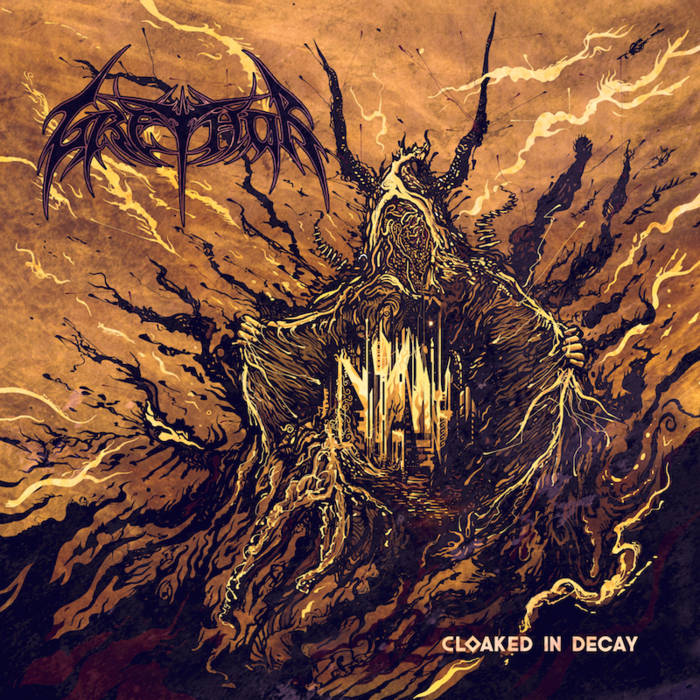 Cloaked in Decay
by Grethor

Grethor is a band from Virginia. Any other knowledge is unnecessary beyond pressing play, 'cuz brother, this is the good stuff. From the album page:

Cloaked In Decay takes both traditional and avant-garde black metal and fuses it with a chaotic barrage of dark death metal riffs, laced with hooks and grooves...The EP's lyrics are inspired by the 1895 novel “The King in Yellow” by Robert W. Chambers: a series of short stories, of which four of them are about the eponymous forbidden play that spurs despair and insanity to those who read it. Cloaked In Decay also warns of the ills of religion, man’s existential crises and cosmic horror.

You're still reading? Alright, fine. Did you like Dendritic Arbor? If not, just gtfo. Grethor could definitely share a stage with those dudes...and it would be easy given the close geographical proximity. Wretched and death vocals cause brain cells to self-destruct. Their delivery is absolutely terrifying. It's like a swarm of rabid crows pecking each other to death. Some of the layering of highs and lows also brought to mind Malthusian.

The end result sounds very chaotic..but in a good way. A discordant jumble of a mess played by an army of evil clowns. And yet beneath the melee you'll find traditional elements buried as on opening track, “Wraith's,” guitar solo. The mathy drum work is a beautiful cacophony of blastbeats and general madness. And while the speed and technical prowess is impressive; things become even more ominous and grand when the pace is slowed down. “Organic Tomb” is as close to quiet as the band gets, and is extremely creepy and foreboding.

And therein lies another success of this album: each track has its own flavor while benefiting the overall aesthetic. It's a phrase that I have used frequently, but only because to me this is a prime factor differentiating a good set of songs from a great record. With Grethor, it was another one of those cases where picking a favorite track was nearly impossible. I just hope these guys get a tour together that goes through Portland. Listen on bandcamp, toss 'em $5, put it on a playlist with Cobalt. Sounds like a great day.