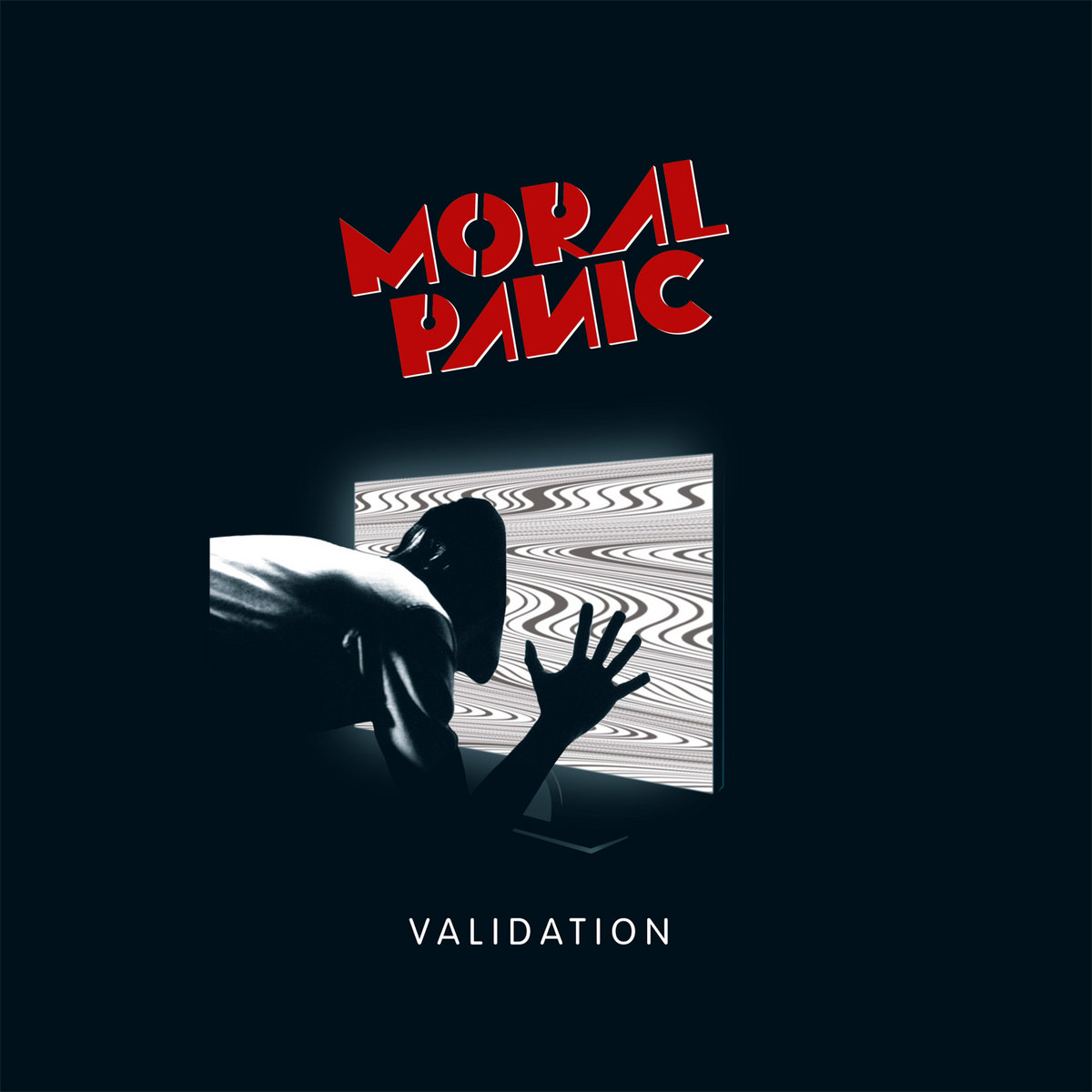 When it comes to punk and rock ‘n roll, I still find simple to work best.  Quick and punchy songs that get their hooks under your skin in those first fifteen to twenty seconds and don’t overstay their welcome often work better than those that try to drag things out with repetition, and it’s this approach that immediately drew me to Moral Panic’s latest album Validation.  The New York City based trio crams nine roaring tracks of garage rock and punk into a concise seventeen minutes that deliver foot stomping hooks and raw intensity in equal capacity.  Compared to their earlier releases the energy level has shot up significantly and the sound is bigger and in your face than before, making this a strong showing from a band worth paying attention to.

Described as too rock ‘n roll for punk and too punk for rock ‘n roll, that combination works to Moral Panic’s advantage and gives them a sound that’s familiar while still feeling fresh.  For anyone that’s listened to plenty of garage rock or punk over the decades specific bands are sure to come to mind, but it’s delivered here with hook after hook that regularly hops across those genre lines and never falls too closely to any one group’s template.  Sometimes the trio settles into a bouncier toe tapping rhythm that is pure garage rock, power pop, and everything in between, while the sheer speed of “Hatchet” will have listeners wanting to start an impromptu mosh pit wherever they are.  When Moral Panic speeds things up to blistering levels on tracks like that they remind me a bit of the raw intensity of bands like Zeke and manage to pull it off with ease.  Compared to their 2017 self-titled effort the lo-fi sound has been stripped away in favor of a huge, booming sound that washes over the listener and emphasizes guitar, bass, and drums in equal capacity.  But it isn’t just the changes in production that help to elevate Validation, as Moral Panic has written songs that are consistently strong from beginning to end.  Faster paced punk and garage rock have a tendency to run together due to their stripped-down simplicity and speed, and while there are similar moments at times the amount of riffs that stand out upon repeat listens makes a difference here.

Daniel Kelley’s vocals have a rougher edge to them, touching a bit more upon the punk side of the spectrum with a direct and in your face approach.  Sometimes when the instrumental side of a band gets louder and noisier on record the singing gets swallowed up in the mix and struggles to break through, but everything is well balanced on Validation and this never becomes an issue.  Songs like the title track add in some back-up singing that feels somewhere between punk gang vocals and power pop, adding in a slight hint of melody alongside the grittiness.  Add in a few well-placed samples at the end of “The Rail”, “Hatchet”, and “Quarantine” and you have material that hits hard but still has specific sections that stand out.

By letting both their rock and punk sides run wild, Moral Panic has put together an album filled with high energy hooks that stick with you but don’t overstay their welcome.  The fact that even after repeated spins a lot of these tracks haven’t blurred together and specific riffs and verses remain with me is a testament to the band’s ability, and while they tread familiar ground they do it extremely well.  There are a ton of artists in these genres vying for your attention, but this trio deserves it.  Validation is available from Reptilian Records and Alien Snatch! Records.