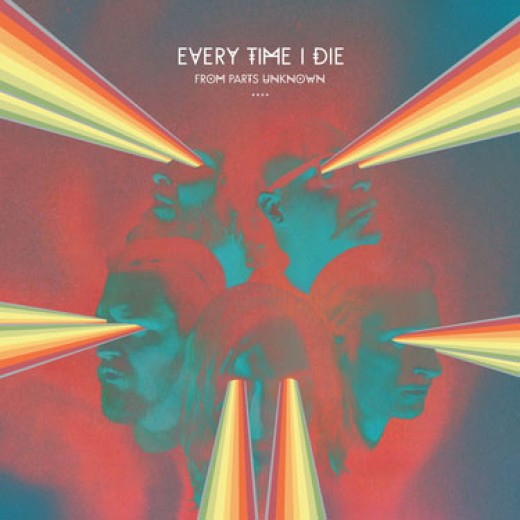 From Parts Unknown
by Every Time I Die

Like the figurative peanut butter in my chocolate, someone has put Converge in my Every Time I Die. This should come as no surprise, given that From Parts Unknown is produced by none other than Kurt Ballou. A big fan of both groups for many years, I'll admit that I was excited at the prospect of this union given their penchant for breakneck speed and chaotic riffs and vocals. But I must say, my reaction to the end result is mixed. Ever taste those waxy knock-off Reese's cups? Apparently simply pairing two ingredients is only part of the process.

If there is one area that From Parts Unknown shines in, it is musicianship. Shawn Ingram's (Coalesce) gritty backup vocals and the screechy guitars on "Pelican Of The Desert" are right out of one of my favorite albums of 2009, Axe to Fall. Each track features a level of technical prowess on drums, guitar, and even bass that have always made Every Time I Die stand apart from many of the metalcore acts with which it is unfairly compared. The way the guitar hook is broken up by the unusual drum patterns on "The Great Secret" is just so right. Songwriting is tight and production fitting. At only 32 minutes of run-time and the average track hovering around 2:30, there is little room for what I might call filler.

But for all of its technical strengths, From Parts Unknown falls a bit short in the enjoyability and innovation departments. Again, the peanut butter and chocolate are both there. In fact, it is a veritable melting pot of elements from previous outings. There are moments that harken back to the dirty south sound of The Big Dirty as on the swinging "Decayin' With The Boys" and "El Dorado." Other times it continues the experimentation of Ex Lives with the stirring piano dirge, "Moor." Unfortunately, these parts do not create as tasty a treat in the end. Where is the smirk-inducing impact of Gutter Phenomenon's lyrics? Or the unrelenting, head-banging catharsis that was New Junk Aesthetic?

For whatever reason, From Parts Unknown fails to engage me on the visceral level I have come to expect from ETID. It is their lolz-worthy, tongue-in cheek, biting sarcasm that made them such a draw to begin with. I haven't had any of those moments with this album. I want to "know the stripper's real name." I want to learn how to get my song "on the radio" with the "right hook." Instead I am left with a set of well-played, well-constructed tracks that ultimately leave me feeling cold. Final verdict: needs more cowbell.