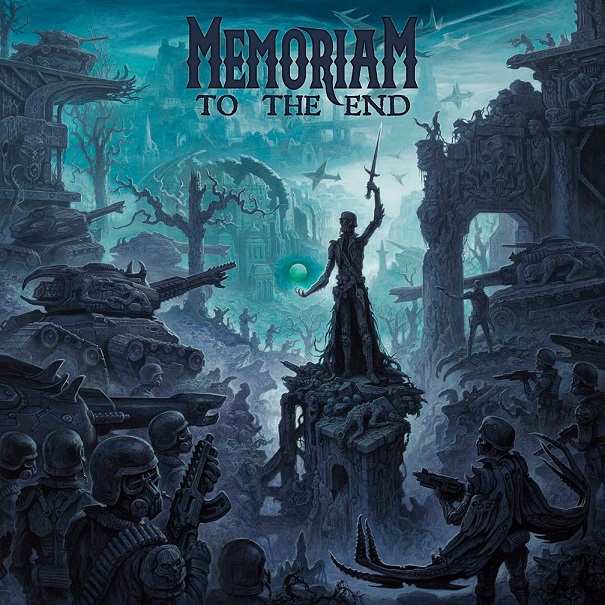 Memoriam - To the End (Album Review)

To the End
by Memoriam

It can be difficult for new bands featuring veteran metal musicians to get out of the shadows of their past, but Memoriam has established themselves as a name worthy of their own following.  Formed by members that have spent time in Bolt Thrower and Benediction in 2016, Memoriam has put out material much faster than most would have expected with an album coming out every year between 2017 and 2019.  But this year’s To the End comes with some noticeable changes, with drummer Spikey T. Smith (Sacrilege) replacing Andrew Whale and finds the group slowing things down a bit more often in favor of more doom and melodic elements.  It’s a shift that gives them more of an identity than before, and while still not quite a modern classic this is a strong showing that hints at even greater things yet to come.

I have to admit that after the For the Fallen in 2017, the next two Memoriam releases didn’t grab me quite in the same way as they seemed to tread a bit too closely to each other at times.  So, it was refreshing to find that To the End shakes things up in a way that still stays close to that crushing death metal tone but shifts things in around in terms of melody and tempo more often.  “Onwards Into Battle” and “This War is Won” offer a satisfying one-two punch of lumbering, bottom heavy grooves and faster onslaughts with just the right amount of melody woven in, capturing that methodical aggression that made some of their previous groups so appealing.  But once you get to songs like “Each Step (One Closer to the Grave), Memoriam really demonstrates how they’ve pushed into new territory.  Here the tempo slows to a crawl, and the atmosphere channels bands like Paradise Lost with haunting and gothic-like melodies that soar over top of the lumbering death metal base.  There are still a handful of songs that while consistent, don’t fully stand out upon repeat listens, but this is easily the most varied and engaging the material has ever been.  The ending tracks “Mass Psychosis” and “As My Heart Grows Cold” stand out in particular, with the former bringing in a little Killing Joke in through its methodical drumming and the latter once again showcasing the best of the gloomier doom-like melodies.

Karl Willetts’ distinctive growling was a highlight of Bolt Thrower’s albums, and they still remain just as powerful and gritty throughout Memoriam’s material.  But his cadence has always varied a bit from the standard death metal growl, and this becomes more evident on the slower moments.  On “Each Step (One Closer to the Grave)” each word is spaced out a bit more and seems to hang over the recording with an ominous presence, while on “Vacant Stare” and “Mass Psychosis” his range changes slightly and sounds a bit more like Jaz Coleman from Killing Joke, which was a pleasant surprise for me.  This is an element I wouldn’t mind hearing even more of as the group continues forward, as these subtle shifts in tone really make the vocals stand out further.

There are still a few lulls when the band goes back towards a more standard death metal cadence, but overall, this material has stuck with me a lot more than the last few Memoriam records.  Here they seem to be trying more new things and finding where this project differs from their past achievements, and if they can continue to capture some of the atmosphere and slower moments then there is a lot to look forward to.  It won’t replace your Bolt Thrower or Benediction classics and isn’t meant to, but if you just want some well-written death metal and death/doom then this fits the bill.  To the End is available from Reaper Entertainment Europe.