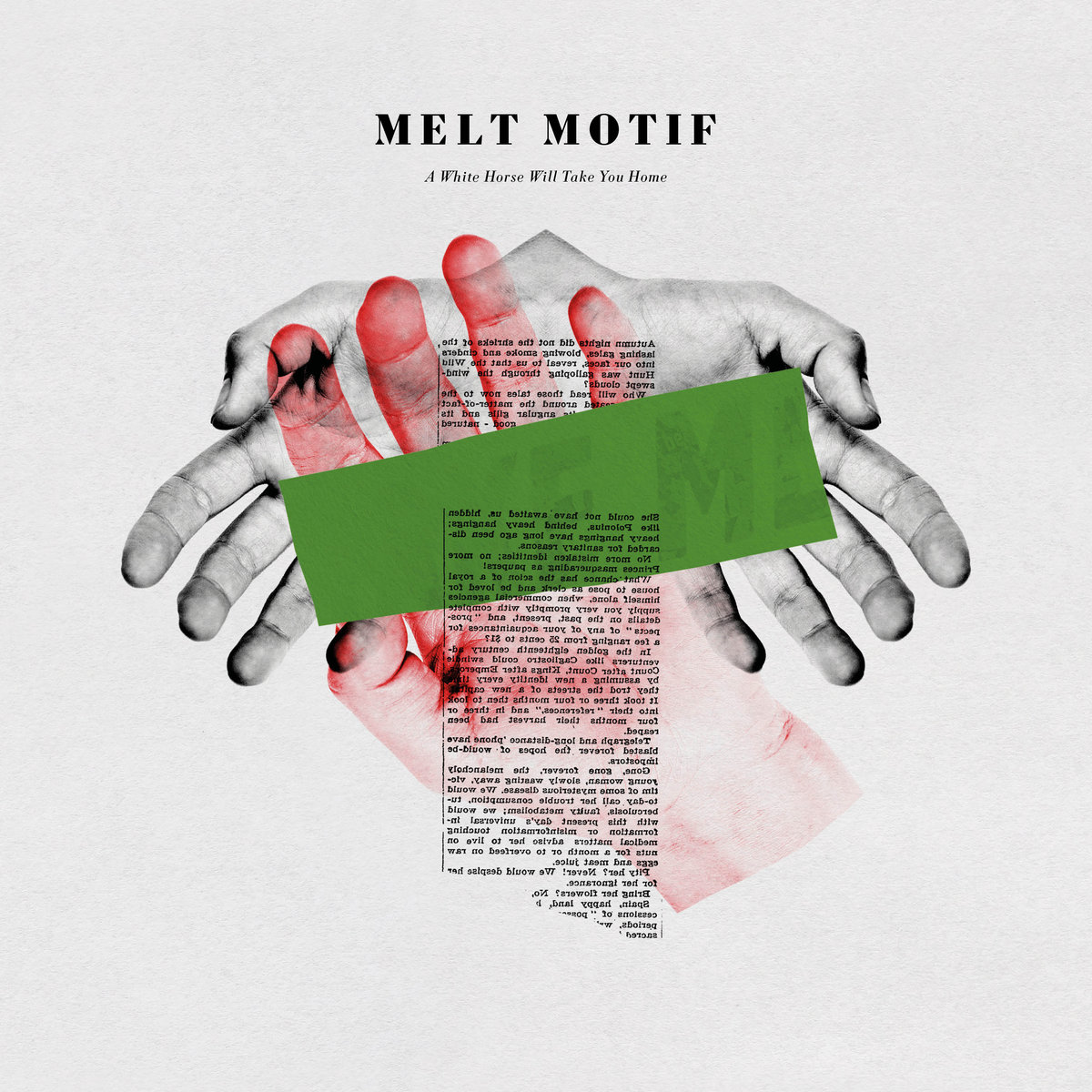 A White Horse Will Take You Home
by Melt Motif

When I’m not listening to some of the heaviest music around, I tend to gravitate towards material that has more of an ethereal or dreamy slant to it.  Shoegaze, darkwave, and associated genres prove to be appealing and sometimes end up being just as dark and mysterious as some of the metal out there, and it’s for this reason that Bergen, Norway based Melt Motif caught my attention.  Formed by Rakel and Kenneth Rasmus Greve alongside São Paulo based producer/musician Joe Irente, the band merges the dreamy and cinematic qualities of trip hop and dark wave with more aggressive bursts of industrial.  Their debut full-length A White Horse Will Take You Home manages to fuse these light and harsh sides together in unpredictable ways, and while it may not fully stick the landing there is still plenty here to draw in fans of all types of electronic music.

Melt Motif’s fusion of sounds is likely to bring a slew of different artists to mind, yet even at this early stage the group’s music never strays too close to one particular template.  Opening track “Sleep” lives up to its title, delivering layers of dreamy and somewhat dark melodies alongside breezier rhythms that lull you into a relaxed state and which build up to an atmosphere that would easily fit into Blade Runner 2049 or similar sci-fi film.  One track later it’s made clear that you shouldn’t expect ethereal and soft for the entire run though, as “Mine” builds up synthwave rhythms that lead into bursts of industrial guitar and elements that wouldn’t sound out of place on a Rammstein album.  This duality is continued throughout A White Horse Will Take You Home, as the bursts of aggression don’t always come in predictable fashion and sometimes you’re lulled into a false sense of security before the chunkier guitar riffs come roaring back in.  In this way, it feels like Melt Motif has structured the material to serve as a film soundtrack, allowing for slow pans and building tension that culminate in unexpected action.  The heavier moments bring in the aforementioned Rammstein with a little bit of Nine Inch Nails, while the soft and ethereal melodies reminded me of everything from Collide and Portishead to Goldfrapp, and that proves to be quite the enticing combination.  Admittedly despite how well this combination comes together early on, I found that the album stumbled a bit around the halfway point and a few of the songs seemed to drift off into their smokier atmosphere without a truly memorable payoff.  I appreciate the subtle layers that reveal more over repeat listens, but it does also feel like there’s room for Melt Motif to further experiment down the road.

No matter how aggressive the instrumentation can get, the vocals keep things on the soft and dreamier side courtesy of Rakel Greve’s performance.  Her voice echoes over top of the instrumentation in ways that give off a more haunting and ethereal tone, and this pulls you further into the band’s material.  What works well is the way that Greve starts off at almost a whisper during the softest moments and builds alongside the rest of the group, reaching some soaring peaks just as the guitar and electronics reach booming crescendos.  There are also some moments where some added effects and modulation shake up her singing, and “The City” features some backing singing that enhances the trip-hop vibe of that particular track.  I did find a handful of moments where the vocals started to overwhelm the instrumentals ever so slightly, obscuring some of the nuances, but this wasn’t a huge deal overall and the consistently dreamlike tone did keep me coming back.

A White Horse Will Take You Home is a strong first showing from a band that’s arrived with a sound all their own.  There does seem to be room for them to expand upon this foundation and hit even louder, aggressive climaxes alongside the soaring, angelic ones, but songs like “Mine”, “Andalusian Dog”, and “Random Access Memory” have kept me coming back regularly.  I haven’t seen too much chatter about Melt Motif’s debut elsewhere, but whether you’re into pulsating industrial or ethereal trip hop there’s plenty to enjoy here and this is an album worth giving a shot.  A White Horse Will Take You Home is available from Apollon Records.