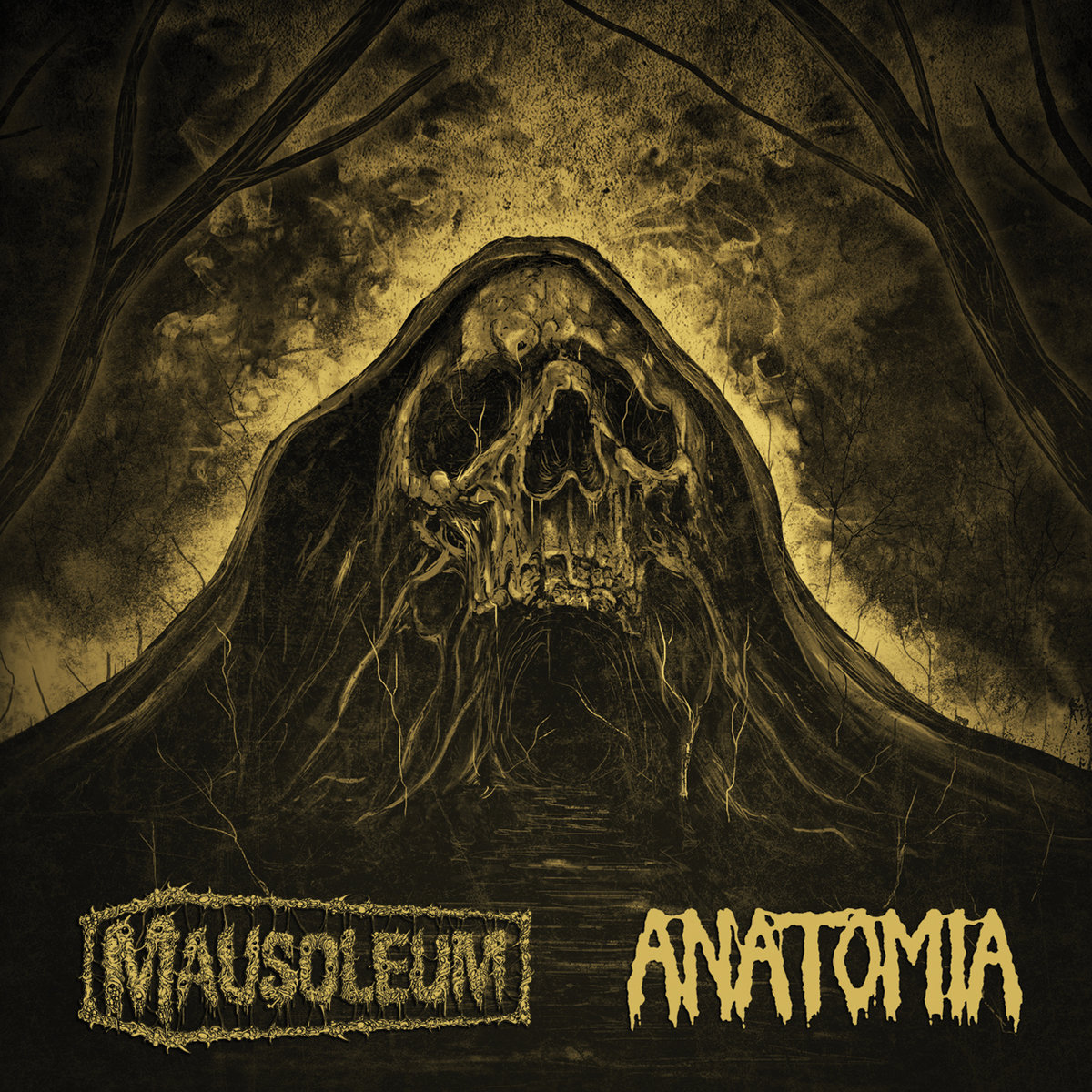 I’ve always been a fan of the split format, as it allows for different bands to naturally complement each other or even head in some slightly different directions outside the context of an album.  The two bands featured on the subject of this review are no stranger to splits, as Pennsylvania based Mausoleum has had their fair share over the years and Japan’s Anatomia has over a dozen in their discography.  Originally released on vinyl by Behind the Mountain and cassette from Headsplit Records last year, the always reliable Horror Pain Gore Death Productions has given the material a digital and CD release.  Featuring seven tracks of filthy and gory death metal and death/doom, the material is easily up to par with what either band has put out on full lengths before and is well worth the time of fans of either style.

It has been a few years since Mausoleum has put any material out, with their last release coming in the form of a compilation back in 2017.  The death metal band has been around since 2001 but their material has often been spread out, with their two full lengths having an eight-year gap between them.  I remember getting a teaser CD-R for some of the tracks that would be on Back From the Funeral at Maryland Deathfest 2010, which has led me to keep an eye out for anything Mausoleum put out since.  The four tracks here continue their horror and gore obsessed death metal, pulling in a significant amount of Autopsy worship and some doomier elements while still having plenty of substance to back it up.  Chris Demydenko from Abazagorath makes his debut with the band here, and these are easily some of the catchiest tracks Mausoleum has written in some time.  If the last time you heard them was from either full-length, you’ll find that the recording retains some of the raw and murkier qualities while feeling more balanced overall.  Songs like “Voices From Beyond” and “Shrieks of Fright” bring in some slower tempos into the mix that bring in slight hints of death/doom like Anatomia, but there’s also just as much air-time dedicated to faster tempos that lurch forth like the undead.  The vocals in particular make Mausoleum continue to stand out for me, as the lead singer has a raspier, inhuman pitch that recalls Chris Reifert while other members provide backing screams and growls that only add to the gory feel of the music.  Add in some well-placed horror movie samples, and you have four songs that are sure to be on repeat for a while.

Anatomia has been a favorite of mine when it comes to death/doom for some time, as their material has brought a good deal of murkiness and gore with a noticeably razor-sharp edge.  The three songs here seem like a good way to hold listeners over before their new full-length Corporeal Torment comes out in May, and they once again find the band doing what they do best.  “Mangled Flesh” launches into an assault of riffs and drum beats that seem to sporadically speed up and slow down until they transition over to a much slower crawl.  This is also true on “Rotting Innards”, and the tonality remains so filthy and jagged that when combined with the more atmospheric moments it feels like you’ve been transported into the most horrifying and tense locations from a horror movie.  Anatomia’s vocals are once again as gross and guttural as they come, with the growls spreading outwards with such regurgitation that it sounds like a monster out to get you.  It’s a natural complement to Mausoleum’s side as they both seem as though they want to outdo the other on filthy, murkier tonality.  Rather than having all three songs go for the same death/doom approach, “In the Crypt” instead ends the split on a much slower and atmospheric note with haunting melodies and eerie chanting feeling like they’re dragging you into the afterlife.  Anatomia’s had some interludes like this before on past material, but it really reaches peak effectiveness here.

Some splits are throwaway releases offering poorly recorded songs or material you can get elsewhere, but that’s certainly not the case here.  Both groups are at the top of their game throughout, and bring that old-school horror feel with their death metal and death/doom that’s immediately appealing.  This is easily the best Mausoleum has ever sounded and I hope it leads to a new album at some point rather than another multi-year hiatus, while Anatomia’s side will keep me satisfied and coming back for more until Corporeal Torment drops in May.