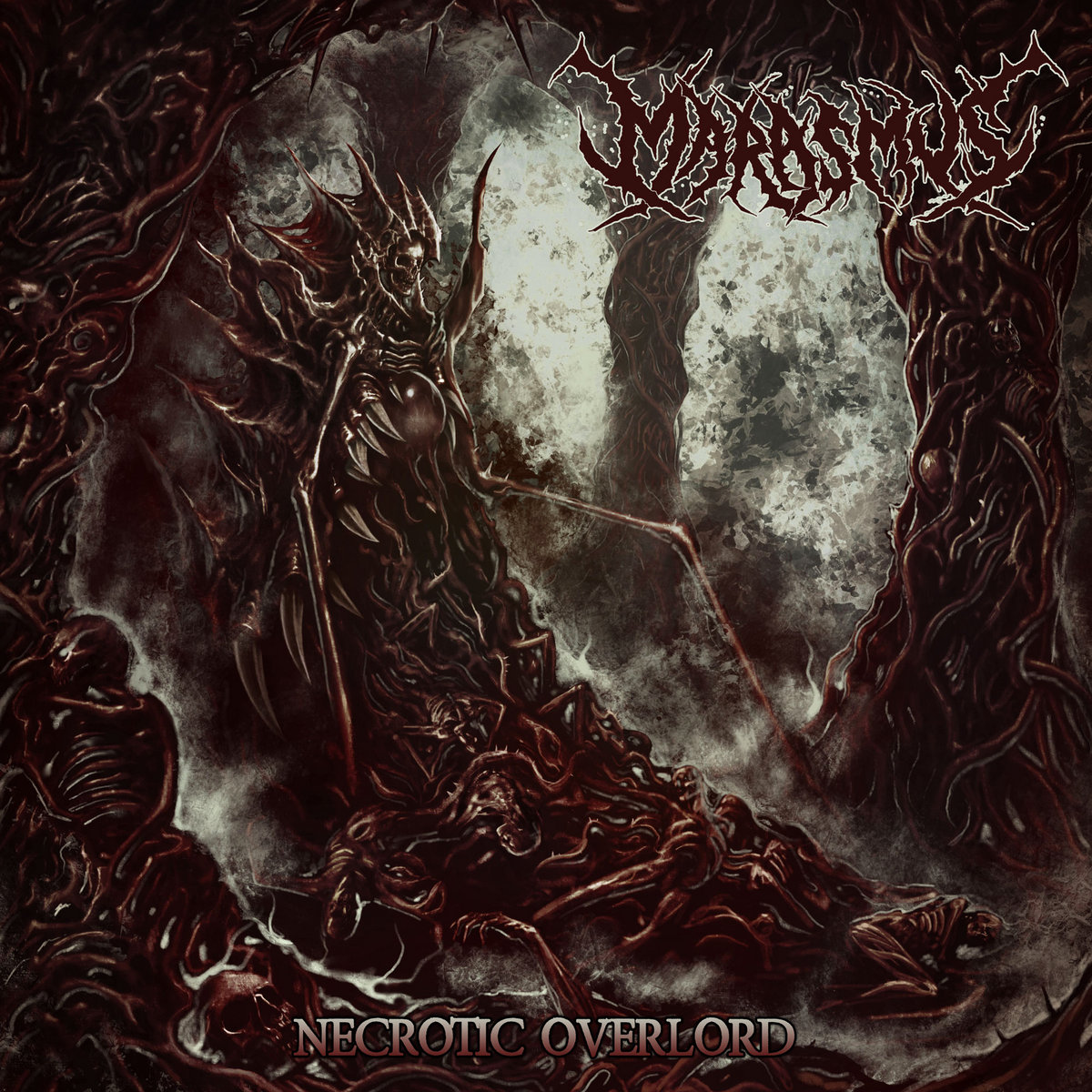 Back when the Transcending Obscurity webzine was still around I remember praising the sophomore effort from US death metal band Marasmus, and nearly five and a half years later things have come full circle as they’ve put out their third full length Necrotic Overlord on the label.  For the uninitiated, Marasmus hails from Kansas City, Missouri and occupy that sweet spot in old-school death metal where it’s got the tonality of the more brutal variants, but the speed and songwriting has a bit more technicality.  With this latest release they’ve continued the infectious grooves and brutal bursts of speed that caught my attention on Conjuring Enormity but have made some tweaks and gone for a bit more of a stripped-down sound than before.

Given an album name like Conjuring Enormity, it made sense that Marasmus went for an immense and fuller sound and there were quite a few moments that reminded me of more recent material from Vader.  Fast forward to 2021 and the group’s gone for a different approach on Necrotic Overlord, coming through with a rawer tone and drums that sound a bit more like what you’d expect from a 90s death metal album.  In some ways this attempt to strip things back a bit brings to mind earlier Deicide and a lot of other death metal from that same time period, and whether you prefer this approach over Marasmus’ prior effort will depend a lot on personal preference.  Regardless of that, there’s no denying that these guys continue to bring quality riffs and with this album they’ve been able to switch things up even more than before.  Opener “Ectoplasmic Violation” launches right into chunkier mid-tempo grooves and dense blasting, channeling that brutality and technicality without falling into either of those two sub-genres of death metal.  There’s a bit more melody to the songs than I remember from Conjuring Enormity, and the programmed synths on a few of the tracks inject some additional creepy atmosphere alongside the heaviness.  Marasmus may be pulling from a classic template, but they vary the tempos often enough and provide some downright blistering solos that will have certain songs sticking out upon repeat listens, which makes all the difference.

Vocalist Devon Ferrera has the type of guttural growl that towers above the rest of the band and grabs your attention almost right from the beginning of the album.  While this is as standard for death metal as it gets, there are a few aspects to the performance that make a difference, the first of which is that Ferrera changes his pitch slightly throughout the material which makes it feel more dynamic than the average death metal growler.  Secondly, there’s a rhythmic cadence to the growling that syncs up perfectly with the rest of the band.  This may not sound like that big of a deal but having heard so much death metal where it sounds like the vocalist is doing their own thing it’s quite nice to have the two of them go together so well.

Fourteen years in, Marasmus isn’t radically reinventing anything, but they’ve gotten even more brutal and precise with each release.  For those that like their death metal groovy, fast, and razor sharp with hints of brutality and technicality without falling into either of those sub-genres, this is one of the better albums you’ll come across in 2021.  I’m still torn as to whether Conjuring Enormity or Necrotic Overlord is the better release but given that they’re both A’s in my book that’s a good sign that despite the almost five-year gap Marasmus hasn’t lost their edge.  Plus, I’d much rather gravitate towards bands like this than some of the other death metal the bigger labels have been pushing lately.  Necrotic Overlord is available from Transcending Obscurity Records.