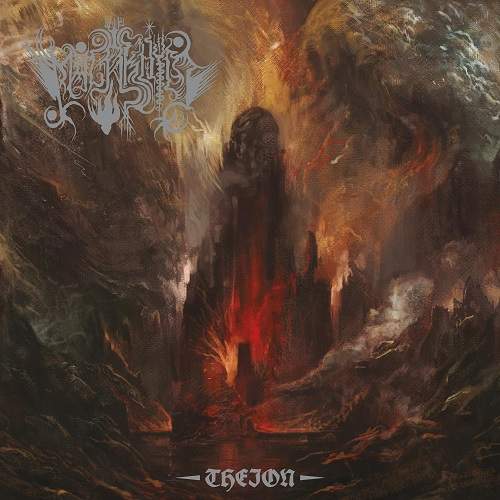 Swedish black metal has differentiated itself from its Scandinavian peers over the years by offering equal amounts of slower, ritualistically inclined songwriting and melodies that were woven in with the blasts.  While there have been plenty of bands that have blazed this path, when the strength of the leads and cold chill of the melodies come together in the right way it still proves to be just as enticing as a few decades ago.  This holds true for Malakhim’s debut Theion, which balances these same elements with immense and polished production values allowing for the details to shine through.  Although the group’s only been around since 2016, it’s often been hinted at that they have a number of veterans from the genre in their ranks (with Naglfar’s Andreas Nilsson being one of the known members), and this experience shows.

A little less than two years have passed since Malakhim’s EP II was released, and it’s clear that in that span of time the band has made some significant tweaks to their sound.  Theion comes roaring out of the gate with powerful instrumentation that twists and turns around a crushing base on “There is a Beacon”, merging the familiar bone chilling melodies and sprawling sound of Swedish black metal with some of the density of death metal.  While the EP already had a grittier and bottom-heavy sound to it, everything sounds fuller on the album and draws you in with the sheer amount of power that is behind every note and drum hit.  The approach reminds me slightly of the way Svartidauði mixed and mastered their last album, as there’s a considerable amount of weight and density to the performance but enough clarity remains for the melodies to weave in and out of these layers and consistently grab your attention.  Admittedly the songwriting does utilize some elements that will feel familiar to anyone that’s spend time with any of the better known Swedish black metal bands, as the material has a tendency to shift from slower, melodically driven passages to blast beats and all-out assaults.  But Malakhim is able to shake up how they approach this attack, and the slight death metal edge that’s prevalent throughout Theion helps it to feel just a little bit different from the norm.  In particular, tracks like “Chalice of Ruin” and “The Splendour of Stillborn Stars” really stand out with some truly mesmerizing leads, and even when some of the more straightforward sections blend together it doesn’t take long before another section jolts you back to attention.

With the tweaks to the production Malakhim’s vocalist E. is even more prominent this time around, and his performance helps to consistently send the intensity through the roof.  His primary style is a raspier scream that cuts through the sound like a sharpened dagger, but rather than sticking with this same tone for the entire album he’s able to deviate in pitch in a way that sounds much more dynamic.  Along with the harsher ranges you’ve also got chants and yells that give off a more ritualistic vibe and help particular passages to stand out upon repeat listens.  Stand-out performances like the one on Theion showcase just how much of a difference it can make on a black metal album after listening to so many one-dimensional screams and growls that are coming from other groups.

The album may be pulling from a familiar template, but when the songs are this powerful and have just the right amount of twisting and turning melodies that get under your skin they help to set Malakhim apart.  In just a few years they’ve progressed significantly and have become a group that’s sure to hook those who can’t get enough of that sprawling black metal sound that lets the atmosphere fester just as much as it whips things up into a whirlwind.  While a few moments do still feel just a tad bit similar, this is still a top notch effort and Malakhim is already at this level on album number one I think they’ll only continue to hit staggering new heights in the future.  Theion is available from Iron Bonehead Productions.