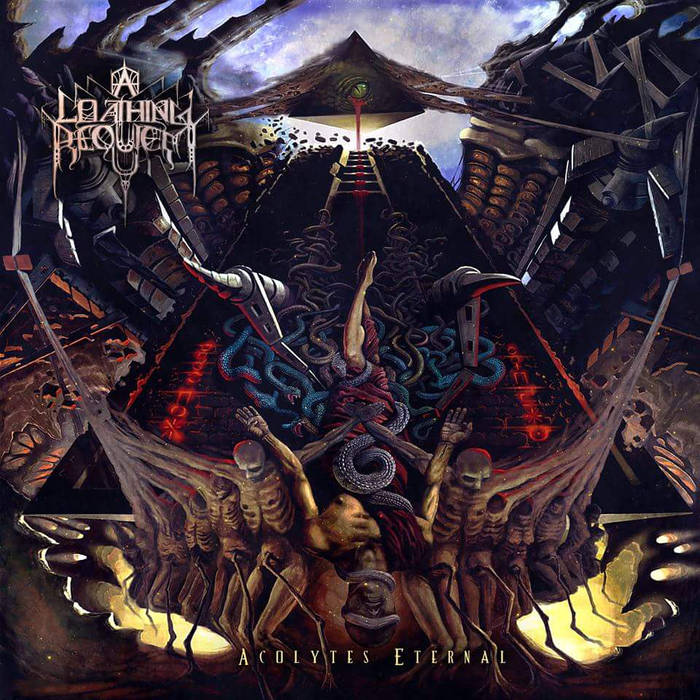 Acolytes Eternal
by A Loathing Requiem

Nashville? Really? As someone who lived for about 5 years in Memphis, I didn't think much extreme music came out of the region. I mean, I love The Chariot, but death metal it is not. So enter Multi-instrumentalist Malcom Pugh and his band of rogues including vocalist/mixer Mike Low and a trio of special features. Together they have crafted Acolytes Eternal under the moniker A Loathing Requiem. That's a lot of metal words, and brother, it's even more metal when you press play.

More melodic tech death awaits you ahead. If you dug Infinite Fields, you will dig this. The guitars destroy with contortionist riffs, and of course the drumming is predictably unpredictable. Like the latest Mad Max, this is entertaining stuff that never sacrifices the popcorn for principle. But marketability aside, these compositions are more than respectable. Fans of Black Dahlia Murder and certain deathcore acts will eat this up just as much as your DM purist.

The vocals are insane with a Septicflesh level of depth and venom. Speaking of which, there are a few symphonic elements utilized exquisitely, albeit rarely as a centerpiece. The additions are well-placed and emphasize some key moments perfectly. But the shining, black star here is always the guitar. The shifting riffs on "Prismatic Delusion" and "The Mortal's Harvest" are enthralling and quite progressive. The ripping solos never go unnoticed either.

If you were in need of a neck-breaking deathgasm, look no further. Aside from the brief interlude of "Clarity", Acolytes Eternal does not take a break. In short, it's just plain fast. Huey Lewis thinks this is "just too darn loud." His loss. Our gain. Whatever you were planning on spending that $8, please reconsider.