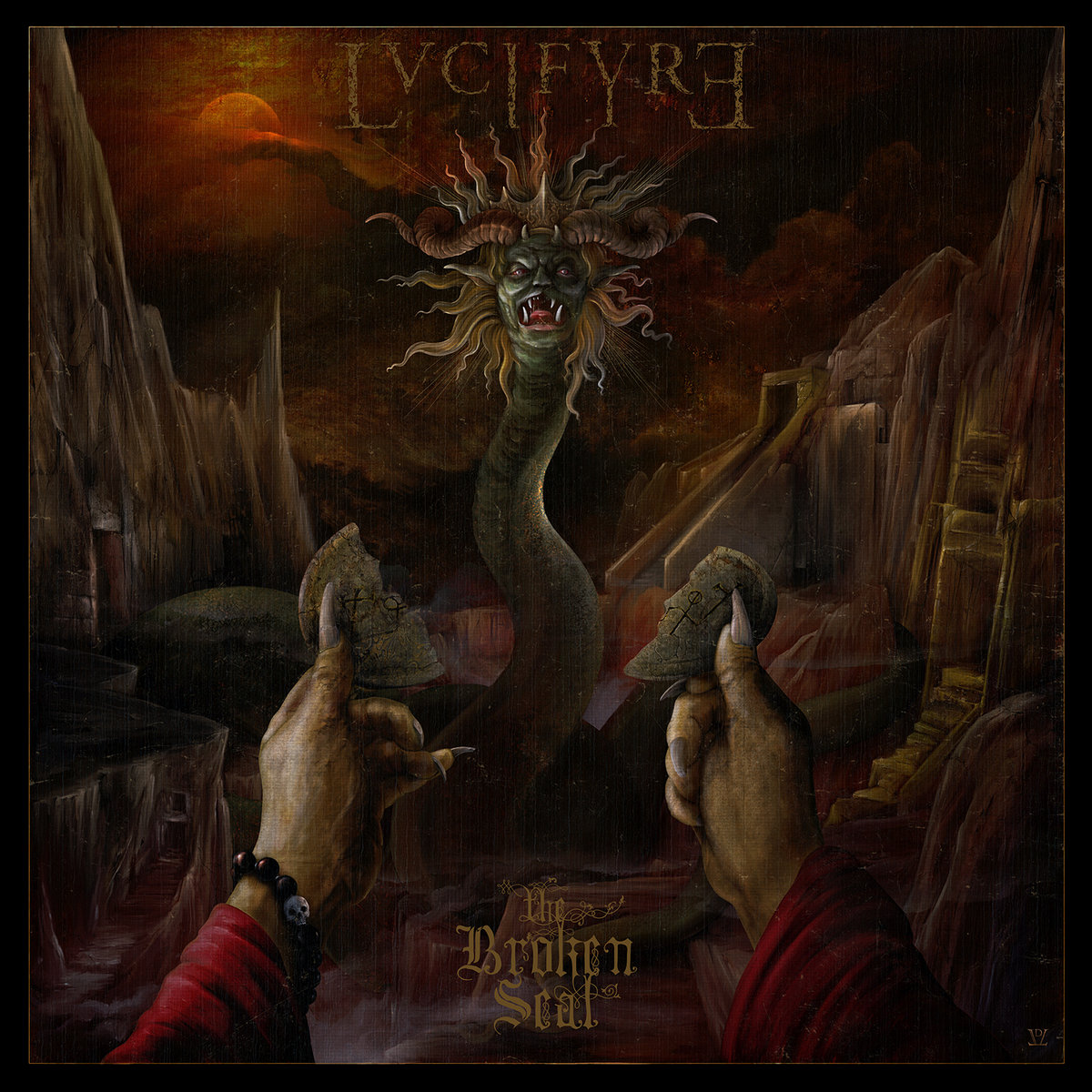 The Broken Seal
by Lvcifyre

Lvcifyre was formed in 2008 by Polish musician T. Kaos after a relocation to London, with the first taste of its dense and pummeling death metal coming courtesy of 2009’s Dying Light ov God EP.  In the years that have followed the band has continued to refine their approach, continuing a technical onslaught of riffs and drum patterns while incorporating the darkness and dissonance of black metal.  2019’s Sacrament saw them explore some more subdued and ritualistic elements that upped the atmosphere and showcased a different overall sound, while this year’s The Broken Seal strikes a balance between that approach and the earlier onslaught.  It comes across like a return to the churning, whirlwind nature of Lvcifyre’s past while also pushing outwards to incorporate some of the ideas Sacrament introduced, resulting in a truly intense release.

A recent interview confirmed that work on The Broken Seal was done in parallel with Sacrament despite that release coming out nearly two years earlier, so it makes sense that some of the ritualistic and slower elements have seeped in here.  You don’t get any hints of that until well after the halfway point though, as Lvcifyre launches into a whirlwind of all-out chaos early on with unrelenting drum blasts and riffs that twist and bend at high speed in ways that feel like they want to reduce you to dust.  There’s still a hint of black metal to the tonality and darker atmosphere that this wall of sound creates, but the group remains firmly rooted in death metal and some of their writing still brings the likes of Morbid Angel, Immolation, and Angelcorpse to mind.  Those are some good influences to have, especially considering that T. Kaos and drummer Menthor have the technical prowess to pull it off, though the tonal shifts between black and death do give Lvcifyre more of their own identity.  Compared to some of the band’s past discography, I found that the riffs stood out a bit more from song to song this time around, as despite the speed and density there are still specific moments that get under your skin.  Had the instrumentals simply stuck at this high speed for the entire way through they would’ve run the risk of a repetitive and uniform sound, but once the tempos slow down on songs like “The Wolf of the Great Dark” and closer “Black Mass” you get some genuinely haunting moments.  It’s a subtle transformation, but it goes a long way in giving The Broken Seal consistent staying power and puts it above other albums of this type that show their entire hand in a few songs and run out of steam too early.

The vocals maintain just as much power as the instrumentals, which helps to make The Broken Seal feel immense.  T. Kaos uses both low growls and higher, raspy screams and shrieks that break through the wall of sound and sound genuinely monstrous at certain points.  At times his approach reminds me of bands like Auroch, channeling a similar mix of highs and lows that result in a more ritualistic sound.  Long-time collaborator Mark of the Devil (Cultes des Ghoules) once again provides backing vocals with his instantly recognizable rasp, and it makes songs like “The First Archon” immediately stand out for me.  Compared to previous Lvcifyre material, Mark of the Devil’s parts seem even more tightly woven into the songs and flow well alongside T. Kaos’ already varied performances.

Album number three doesn’t drastically reinvent what Lvcifyre has already been doing, but it progresses both sides of the band’s sound in ways that takes them to new heights.  The churning, chaotic blasting feels even more refined and razor sharp while varying the attack in ways that make the individual songs stand out more, while the slower atmospheric sections channel even more sinister atmosphere than on Sacrament.  It’s a wild ride that keeps you in its grasp from beginning to end, and despite how much of this type of death metal is out there Lvcifyre continues to stand out.  The Broken Seal is available from Dark Descent Records and Norma Evangelium Diaboli.