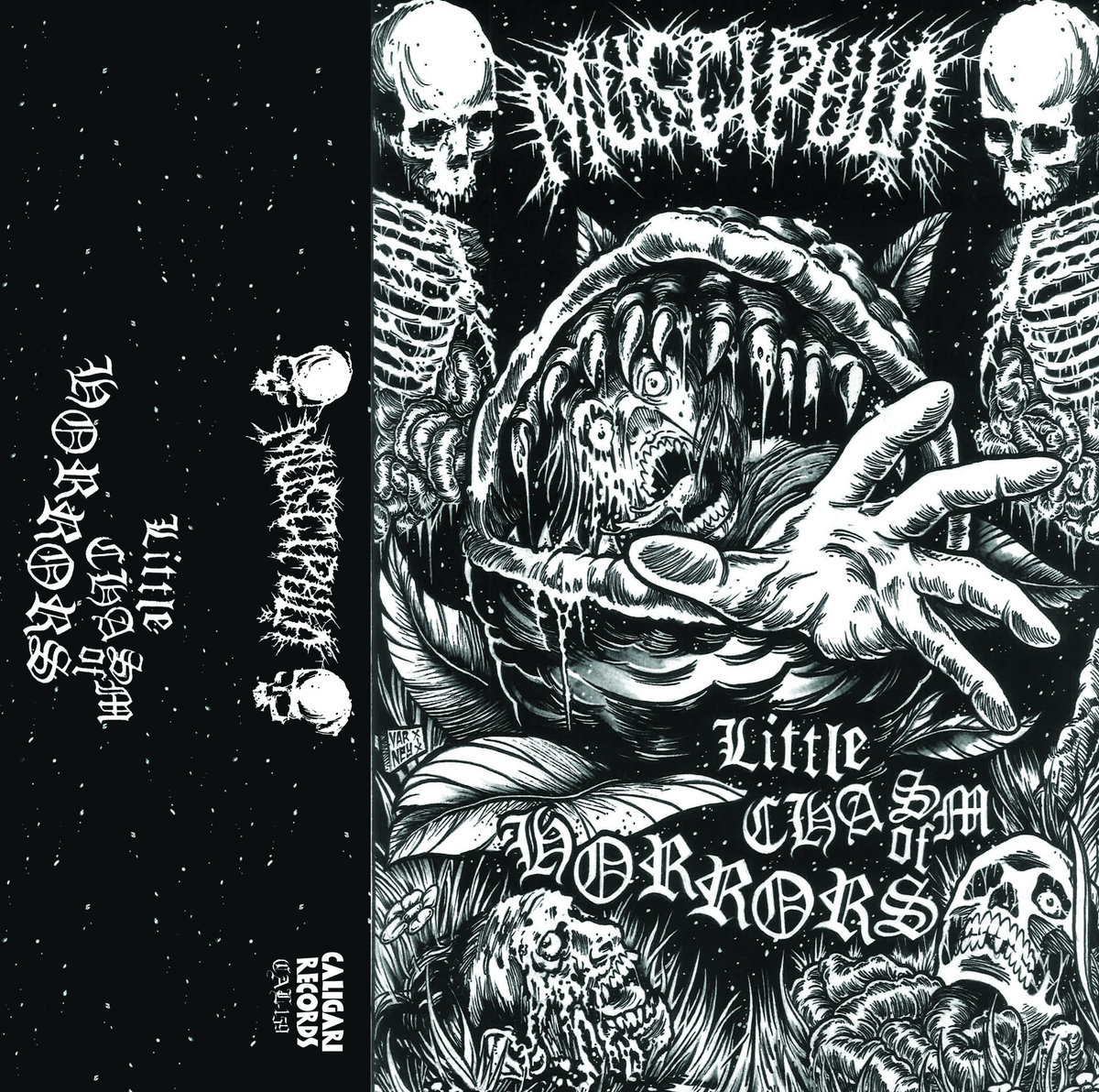 Little Chasm of Horrors
by Muscipula

There’s always plenty of underground metal vying for listeners’ limited attention, but labels like Caligari Records have managed to weed through the clutter and consistently release material that’s worth spending some quality time with.  This holds true for one of their latest releases, the debut demo from Nashville’s Muscipula.  Little Chasm of Horrors may only be ten minutes long, but it crushes everything in its path with bottom heavy, sludge ridden tonality and riffing that recalls classic death metal while putting its own spin on the genre.

Little Chasm of Horrors makes a strong first impression, as opening track “Descending Into Chasm Dionanea Muscipula” begins with a slow, lumbering tempo and tonality that makes it feel like you’ve immediately trapped yourself in a tar pit and are slowly sinking into the bottom.  It’s the same type of build-up that classic death/doom bands have done so well, and after about a minute and a half of this murkiness Muscipula opens things up a bit and lurches forth with riffing that channels everything one could want from this type of death metal.  There’s a clear nod to both American and Finnish influences from decades past, but some of the demo also reminds me of the filth Undergang has been spewing in recent years.  The group injects some of their own flair starting on “Sphagnum Bog of the Depraved Droseracea”, which brings in a sludge swagger that has a bit of Eyehategod groove to it, creating a combination of sounds that’s so infectious yet I couldn’t have predicted that I wanted it.  Each of the three tracks flows seamlessly into the next making this a seamless listen from beginning to end, but there are still specific riffs that stand out upon repeat times through and this puts Muscipula ahead of the pack even this early on.

Although the swampy sounds emanating from the instrumentals would be enough to grab your attention, it’s the heavily distorted and abrasive vocals that seal the deal.  Muscipula’s vocalist has a low-pitched growl that is room filling and sounds like a monster that’s breathing directly into your ear before it eats you.  The recording gives it even more distortion and each word seems to hover over the air as though it’s also gotten trapped in the murk.  This may seem like a small nuance, but it makes a significant impact as the performance only gets more nightmarish and inhuman with each repeat listen.  If this filth and grime is what we get in a short ten-minute run, I can’t wait to hear what this group can channel on a longer release.

Little is known about Muscipula aside from where they’re based out of, but they’ve clearly chosen to let their music speak for itself and it makes a huge first statement.  There’s a little bit of that Southern sludge groove mixed in with murky death metal and death/doom, and despite it’s short length this demo is one that you’ll likely have on repeat for some time to come.  Hopefully this is just the beginning, as I’m ready for even more filth and crushingly heavy riffs.  Little Chasm of Horrors is available from Caligari Records.