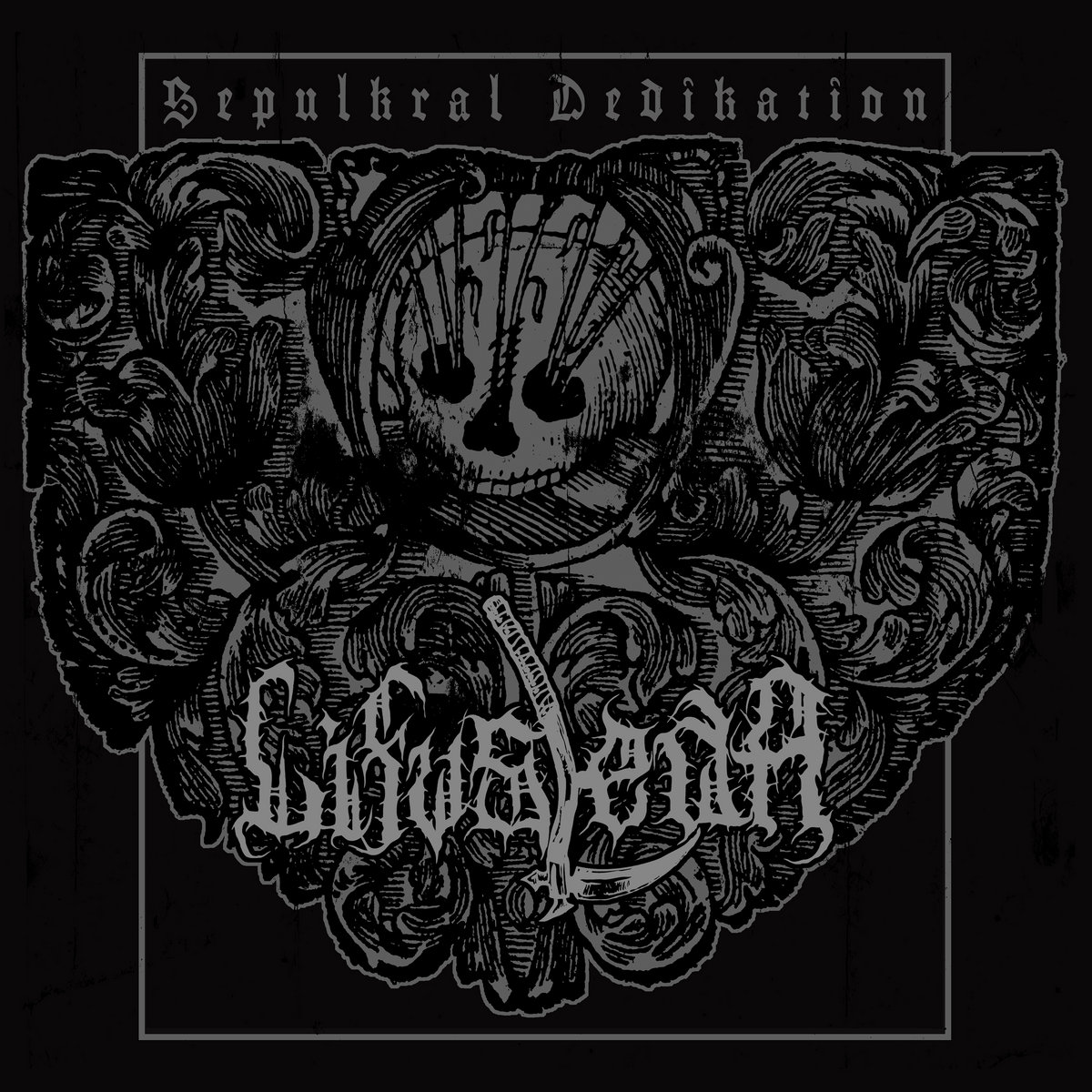 Lifvsleda appeared suddenly in 2019, unleashing a torrent of harsh and cold black metal that recalled the melodic yet piercing style of its home country of Sweden while also bringing in elements of the Norwegian second wave.  Not much is known about those who contribute to it besides vocalist Sigward, whose experience in the genre dates back to that same time period in the early 90s.  Like many from that time, Lifvsleda prefers to keep things shrouded in mystery and lets the music speak for itself and this proved to be a great approach on their debut Det besegrade lifvet in 2020.  Offering up torrents of shrill and jagged instrumentation mixed with haunting melodies and some of the roughest vocals around, there are some occasional bumps in the road, but this debut remained memorable.  Two years later the band has returned with Sepulkral Dedikation which tightens up the instrumentation a bit and strikes an even finer balance between mystical atmosphere and all-out violence.  It’s drawing from familiar sources, but the strength of the riffing and intense vocals makes for an album that solidifies its place in the genre.

Swedish black metal tends to blend in a bit more melody than some of the other Scandinavian countries, with their songwriting sometimes having a bit more of a mystical or otherworldly atmosphere.  Lifvsleda pulls from that same vein but strikes a balance between the raw and polished sides of the spectrum that can be hard to get right, as there’s plenty of that abrasive and jagged tonality on display but melodies are layered over top of this foundation in ways that add to the mystique.  Songs like “Likbålet” are a perfect example of this as they begin with a softer yet eerie melody that recalls imagery of wandering in the countryside and stumbling onto something that feels not quite right, and once the pummeling drums and layers of harsher guitar join these melodies the tone turns more sinister.  It’s not quite as esoteric and dense as some of the more recent Swedish black metal acts out there, but the way the melodies draw you in before the other instrumentation cuts away at your flesh proves to be infectious.  Compared to their debut which had some occasional rough edges that stood out, the material here is compact and the performances are rock solid which allows for the atmosphere and power to take hold of you from beginning to end without many distractions.  You have undoubtedly heard this approach to black metal many times before if you’re an avid follower of the genre, yet the riffs here get under your skin in a way that will have many wanting to return for another listen.  In particular, the ominous and powerful opener “Sändebudet” and sweeping melodies of ““Likbålet” have stuck with me, though Sepulkral Dedikation remains strong enough as a whole that it’s also worth consuming in its entirety.

The vocals are what drew me to Lifvsleda initially, and while the riffs have started to have that same power on this album the rawness of the screaming continues to stand out the most.  There’s something about just how raspy the pitch is and how it comes bursting through the layers of instrumentation that remains jarring and keeps the listener on edge for the entire album.  At times it reminds slightly of the unhinged nature of fellow Swedish black metal band Arckanum, though the music itself doesn’t necessarily tread the same exact territory.  Although the general pitch remains the same for much of Sepulkral Dedikation there are subtle shifts over time that keep it from becoming repetitive, and the way that the screams are stretched out on “Likbålet” and a few other tracks sends chills down my spine every time.  I’m not always a fan of placing vocals so far back in the mix, but it works for Lifvsleda as otherwise they would drown out every other aspect of the music.

Lifvsleda has made some notable tweaks from their first full length that make a big difference, as they’ve increased the melody and haunting atmosphere while still retaining the rawer and jagged edges of their sound.  Their approach pays tribute to the Swedish and Norwegian black metal styles from the 90s while still having some of its own nuances, and despite the familiarity many of these tracks have been stuck in my head for days and kept me coming back to this haunting and sometimes grimy sounding effort.  It’s still early in 2022, but this is one of the better Swedish black metal albums I’ve spent time with and suspect it will still be in my rotation for months to come.  Sepulkral Dedikation is available from NoEvDia.