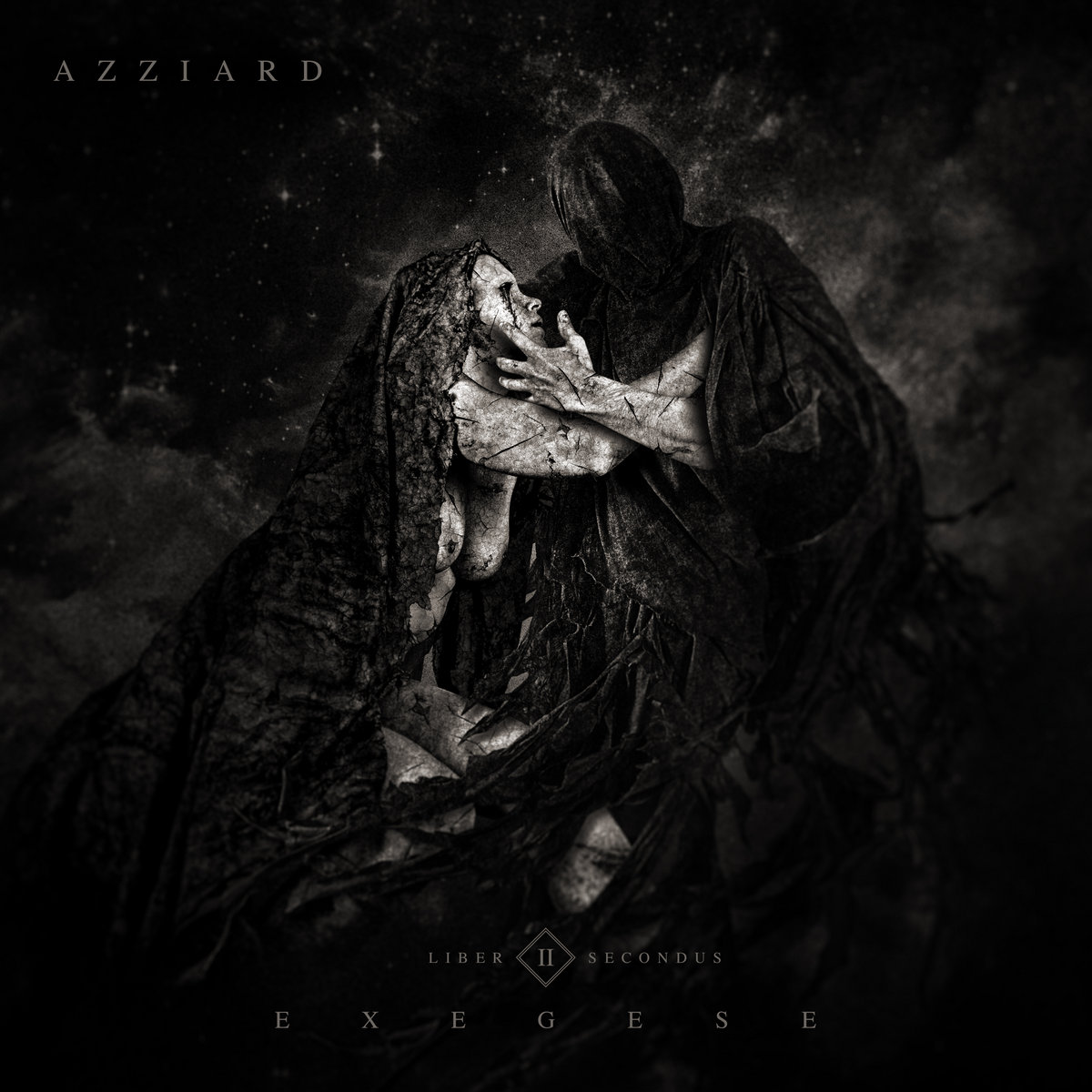 French black metal band Azziard has been lurking in the shadows since 2001, originally writing material themed around World War I before turning their attention to more human and psychological elements through an exploration of Carl Jung’s Red Book.  This new focus emerged in 2017 with the start of a new trilogy of albums, and while Liber Primus: Métempsychose went under my radar fellow Metal Trenches reviewer Raffy gave it a high score.  Three years later the band has continued their trilogy with Liber Secondus – Exegese, which continues the themes and fusion of black and death metal elements but ups the polish and clarity of the sound significantly.  It’s likely to feel a bit familiar to fans of French black metal, but the consistent flow from beginning to end and strength of some of the individual riffs make this an album that deserves your attention.

Having gone back and sampled some songs from Liber Primus: Métempsychose in preparation for this review, one of the biggest differences between the two albums is the clarity of the production.  Previously Azziard went for a very bottom-heavy sound, moving between elements of black and death metal regularly while keeping a dirty and dense approach throughout.  This time around the emphasis is on the dark and dread inducing melodies which hang above the rest of the instrumentation and create a very thick and tense atmosphere.  That’s not to say that the group has lost their edge, as when they blast away like on “Retrouvailles avec l'âme” the amount of power they’re capable of generating seems limitless, but there’s a balance here between violence and more subdued, introspective melodies that give Liber Secondus – Exegese a more dynamic feel.  It’s a very polished and modern approach that allows Azziard’s different elements to stand out more than ever before, as when they head back into blackened death metal or more brutal elements this contrasts nicely with the melodic elements and makes them feel more significant.  As I made my way through this material other French bands like Merrimack, Decline of the I, and later-period Temple of Baal came to mind and while Azziard has channeled a similar blend of aggression and more subdued darkness as these acts they still manage to stand out.  Liber Secondus – Exegese does seem to be best taken in as a whole though, as each track flows seamlessly into the next rather than coming through as an unrelated collection of songs and the little details start to pop out more and give an idea of the complete picture with each listen.

A.S.A. started off playing guitars for Azziard before fully switching to vocals on 2014’s Vésanie, and his lower pitched growls and screams suit the sound that the band is going for.  Given that the instrumentals often head into blackened death metal territory and deliver denser, bottom heavy blasting, the emphasis on growls and gruffer screaming/singing only adds to the amount of power that is generated in each song.  Again, I find myself reminded of both Merrimack and Temple of Baal, as A.S.A. has a similar range to the vocalists from those groups and his performance towers above the recording in a way that feels larger than life.  The harsher, jagged edges remain the focus throughout the majority of Liber Secondus – Exegese but you’ll discover some cleaner elements on songs like “Incantation”, where softer, chants are used in conjunction with the screams to create a majestic and commanding presence that sticks with you.

Three years after beginning this trilogy, Azziard’s latest release seems to channel even more darkness that gets under your skin and urges you to think about the nature of life itself.  As is sometimes typical of trilogies, this second piece comes through as more of a refinement than a true evolution but the more dynamic approach to songwriting and balance between dense, death metal-tinged blasting and the soaring melodies proves to be just as appealing.  It’s interesting that Azziard has started to explore similar textures to some of their fellow countrymen, but their songs prove to have just as much substance and deserve a similar level of exposure.  Plus, seeing that the other groups mentioned in this review are ones that have drawn me in over the years, it’s exciting to discover another that can generate this same level of power and polish.  Liber Secondus – Exegese is available from Malpermesita Records.