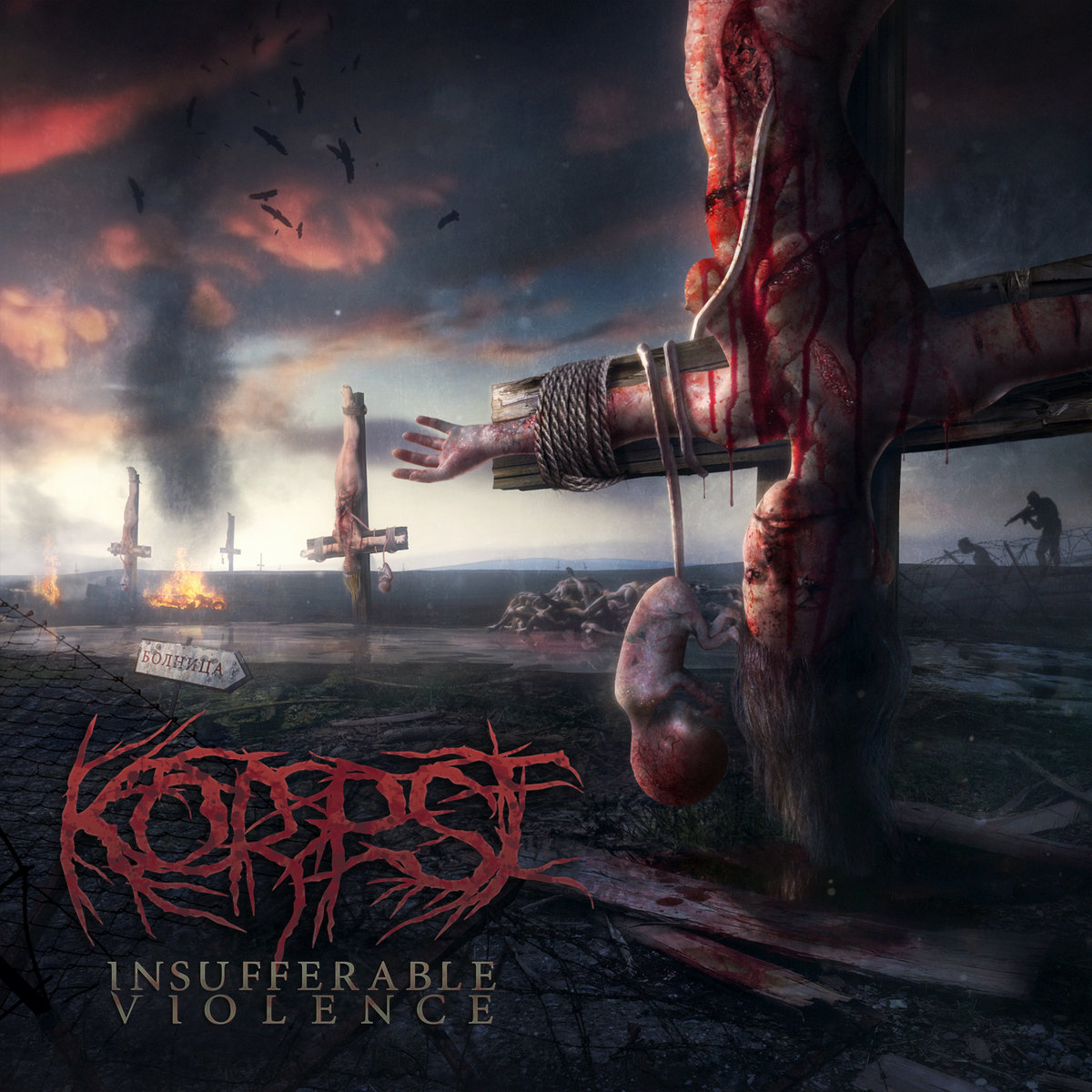 Dutch brutal death metal/slam band Korpse has been putting their stamp on the genre since 2013, providing listeners with material that hit as hard as it possibly could.  A few years have passed since the last time the group put out material in the form of a remixed and remastered version of their debut in 2017 , but in that time they’ve recruited a new bassist and continued to do what they do best.  For album number three (or four if you count the remixed version of their self-titled), the appropriately titled Insufferable Violence, Korpse has gone for even more speed and sheer brutality that rarely lets up.  While it doesn’t drastically change any of the elements you’d expect from this type of death metal, it’s delivered with such fury and precision that one can’t help but want to get bludgeoned by it again and again.

What many of you are likely to find interesting during the first listen of Insufferable Violence is how its bookended by some slower and almost atmospheric songs.  Opener “PTSD” doesn’t launch immediately into the blast beats and faster tempos as you might expect, instead letting sound clips play out while the band delivers some slow, heavy grooves underneath of it.  This starts the material off on a much darker note, but as soon as the title track kicks in Korpse delivers a master class of everything brutal death metal.  With fast and furious tempos and precision to their attack, the band pummels listeners into the dirt and they’re backed up by some production values that really bring out the low end of the sound and weaponize everything these guys have to offer.  The drums still have some of that tinniness to them, but as a whole the recording is a lot fuller and dense than is sometimes typical for brutal death metal and it makes a difference.  Admittedly you’ve got your fair share of traditional song structures with half-tempo grooves that lurch forward in between the blasts, but Korpse is able to shake things up just enough to prevent repetition.  The final track “Epochs of Melancholy” feels like an appropriate conclusion to the slower, darker elements introduced on “PTSD”, as the band uses some melody along with the heavier chugs to create a same sense of tension and brutality through a different method.  These little details help to make Insufferable Violence stand out a bit more than some of the others out there.

Slam is often only as good as its vocalist, as all the brutality of the guitar, bass, and drums don’t mean as much if the growls aren’t that strong.  Sven van Dijk passes with flying colors throughout Insufferable Violence, as he has extremely low, guttural growls that are able to move up in pitch to some squeals and reach some truly inhuman sounding ranges.  There’s quite a bit of variation to how van Dijk approaches the vocals on each song, making Korpse a bit more dynamic than you might expect.  The production is worth mentioning again as the vocals are able to come through with just as much power as the rest of the band, and that makes the album all the more lethal.

For all the average slam and brutal death metal groups out there that are stuck with sub-par production values and one-dimensional songwriting, you get bands like Korpse that take the basics and shake things up just enough from one track to the next to stay interesting.  Combine that with just how monstrous the material sounds, and you have a winning combination.  Don’t expect this to be an album that sways you if you’ve always bounced off this variant of death metal, but if you’ve been a fan of bands like Devourment then Korpse is well worth your time.  Insufferable Violence is available from Unique Leader Records.