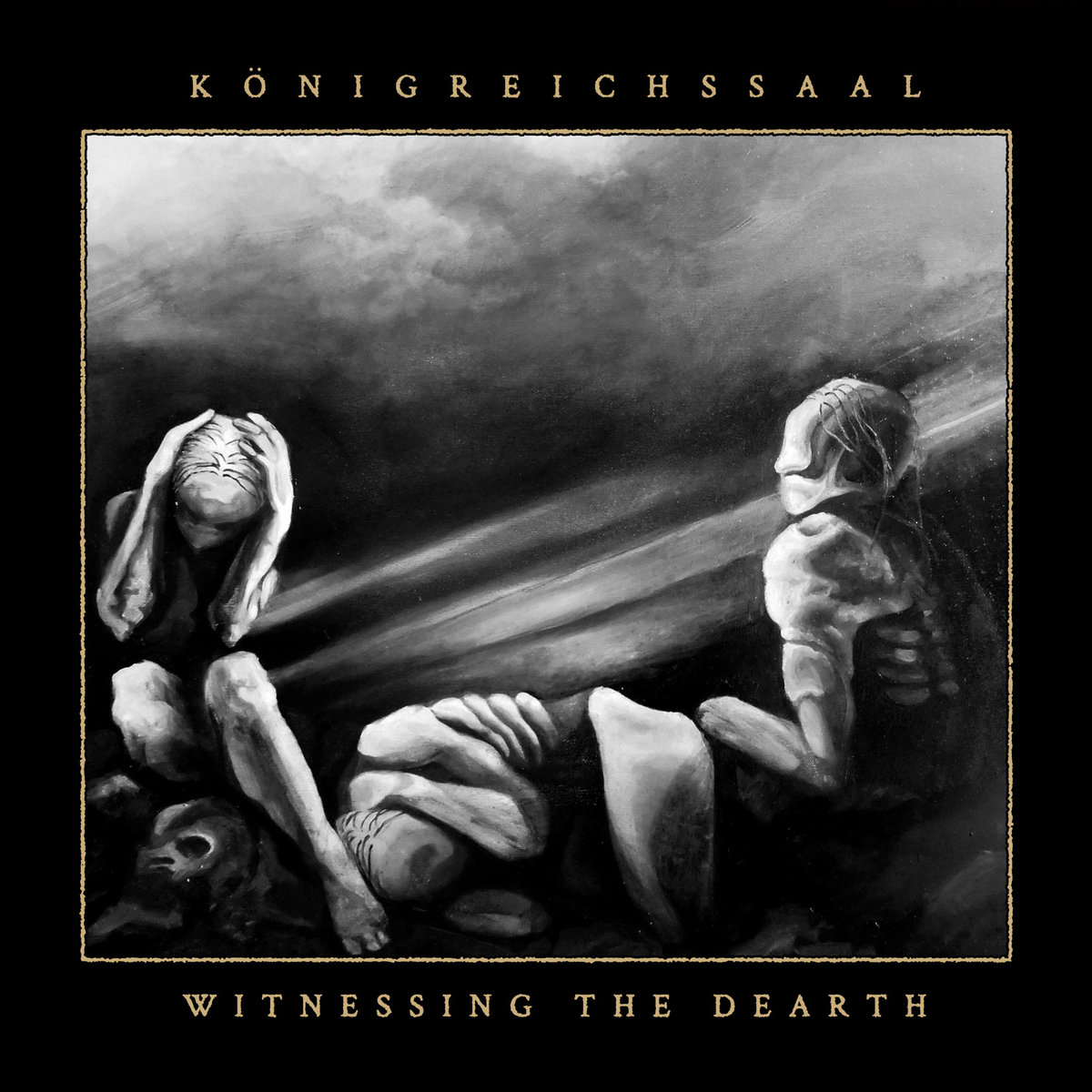 Witnessing the Dearth
by Königreichssaal

Polish black metal continues to bring some of the darker, intriguing takes on the genre, and over the past few years one could easily focus on bands from the country and have more than enough to listen to.  One of the newer groups out there is Königreichssaal, a trio that appeared seemingly out of thin air with their debut full length Witnessing the Dearth in December.  With their label making comparisons to the likes of Mgła and Kriegsmaschine I knew this was an album I had to spend some in-depth time with, and its forty-minutes of methodical black metal and slower doom-like tempos proved to be worthwhile.  It’s a slow burn where the material flows together in a way that is best taken in its entirety rather than bits and pieces, but Königreichssaal is another addition to the genre that has some familiar elements but twists them into something a little bit different.

Right from the start it’s clear you’re in for something a little twisted and dark, as the intro track “Ostium” has eerie, warped melodies and piano playing that sounds like it is straight out of a horror movie.  From there the instrumentation brings that familiar abrasiveness of black metal, though it’s delivered in a more methodical manner rather than through blast beats.  Moving right from that short intro track to the eleven-minute madness of “Der Kreuzweg” gives Königreichssaal the opportunity to fully showcase the type of tense, apocalyptic atmosphere and evolving nature of their songwriting early on, and it’s likely to draw in listeners who can appreciate the more unconventional side of black metal.  Tempo wise this track falls somewhere between the slower, atmospheric side of black metal and doom, with thick melodies that feel like they want to envelop you in a thick fog and transitions over towards minimalist instrumentation and prominent rhythmic variations that remind me of a cross between Kriegsmaschine and Furia.  Although there are some moments throughout Witnessing the Dearth that channel some of that familiar fury and violence of the genre, the band never maintains a truly linear song progression that results in expected climaxes, instead opting to throw curveballs at you throughout the album.  “Force Majeure” is the perfect example, with its sparse instrumentation and spoken word sections that prove to be just as haunting and jagged as the more traditional passages.  Like some of the other Polish artists out there who have taken black metal and stretched it into something a bit more unconventional and dread inducing, the finer details are likely to take time to fully absorb and not every individual track has immediate impacts, but there are passages that will get under your skin and keep you coming back for another descent into madness.

The vocals on Witnessing the Dearth initially come through as raspy screams that echo out above the instrumentation and command your attention, but there are already hints of spoken word and other pitches that are woven into “Der Kreuzweg”.  Stylistically the approach reminds me of a cross between Mgła and Deathspell Omega, with some of the experimental flourishes of bands like Furia or Kly woven in.  There’s a similar sense of unpredictability to the vocal work as there is with the instrumental work, and whether you’re getting chanting, violent screams and wails, or the nightmarish sounding spoken word on “Force Majeure” there’s plenty to take in as you make your way through the material.  It’s difficult to make that sense of dread and tension persist from beginning to end, but Königreichssaal has done just that.

Polish black metal has showcased quite a few bands stretching the boundaries of the style over the past decade and a half, and Königreichssaal is a promising newcomer that’s likely to leave an impression.  The songwriting’s emphasis on suffocating atmosphere and twists and turns that eschew the more linear nature that the genre is known for go a long way, and hopefully this is just the beginning of what the band is able to explore.  Like some of their fellow countrymen’s material, this album is likely to need some time to take in but the effort is well worth it.  Witnessing the Dearth is available from Cult of Parthenope.