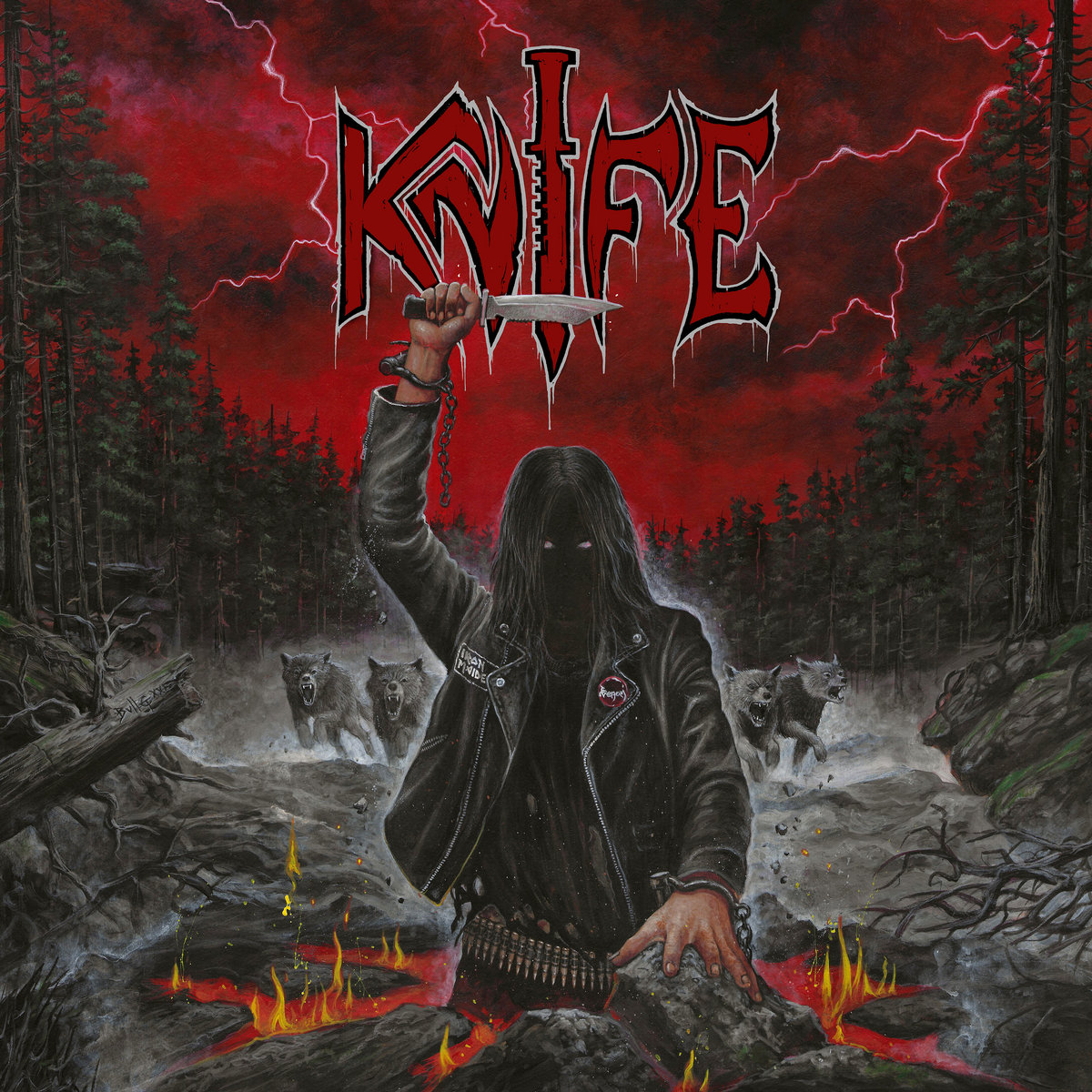 It’s rather surprising that there aren’t more metal bands that have used the name Knife, but these Germans are more than happy to make up for lost time with a sound that could have been ripped straight out of the 80s.  Spanning a little bit of everything speed/heavy metal and hard rock with some hints of thrash, punk, and black metal for good measure, their self-titled debut is a fast and concise effort where the power of the riff is always the focus and the vocals go right for the throat.  Although the sound may be instantly recognizable, the shrill vocals and overall mixture of influences makes Knife a worthy addition to the collection of any heavy metal die hard.

The mere mention of metal/punk likely gives you an idea of what to expect from this band’s debut, as you’ve got plenty of fist pumping guitar leads and intensity that doesn’t waver from beginning to end.  But compared to the majority of groups that compose some Venom, Motörhead, or early Iron Maiden worship and make that their whole identity, Knife feels like a tribute to everything heavy and 80s.  Depending on what song you’re on, you might get a bit more punk/hardcore flair, while others go for black/thrash or straight up heavy metal.  The aforementioned influences all come to mind, but I also get a healthy dose of the likes of Exciter, Tank, and Kreator which shakes things up a bit more.  What keeps Knife going throughout their self-titled is a need for speed and the power of the riff, as no matter what style of metal, hard rock, or punk you hear on a given song it’ll be coming as fast as possible and have some killer riffs and solos to keep you amped up.  A few of the tracks approach that rabid sounding instrumentation that’s on the verge of collapse that defined some of the earliest Kreator output, and that’s certainly not easy to do.  Highlights for me include “White Witch Black Death”, “The Furnace”, and “Demon Wind”, which bring together everything I love about heavy metal with their scorching guitar work that still prove to be catchy even as they burn your face off.  Admittedly there are a few songs that come and go without fully sticking with me but given the short length of the material and the razor-sharp production that makes the instruments sound raw and powerful I’ve still wanted to spin this one regularly.

Where Knife differs a bit from some of the other metal/punk bands out there is the vocal work of Vince Nihil, as he uses a much shriller scream that often sounds extremely close to Mille Petrozza (Kreator), with a little bit of Bobby Blitz (Overkill) added in for good measure.  Having heard so many albums of this style recently where the singers were leaning much more towards Venom with much lower growls and screams this almost pure thrash approach proves to be a nice change of pace, though you do still get a little bit of that here through back-up vocals.  The production ensures that Nihil is always in your face and sounds like he’s going right for your throat, and while these higher, screechy ranges always prove to be a bit of an acquired taste for some metal fans, if you like your early thrash and ear-splitting heavy metal vocal ranges Knife will surely prove to be appealing.

For me, this type of heavy/speed metal never gets old and I’m always excited to hear new bands take on these classic sounds.  Knife does so with precision, hitting hard with songs that run the entire spectrum of heavy, black, thrash, and speed from the 80s while touching upon a wider range of influences than some of their peers.  There are still a couple of tracks that don’t stand out in the pack, which is what separates this album from the best of 2021 for me, but this one has plenty of staying power regardless and puts these guys ahead of the hordes of similar sounding metal/punk bands.  Knife is available from Dying Victims Productions.