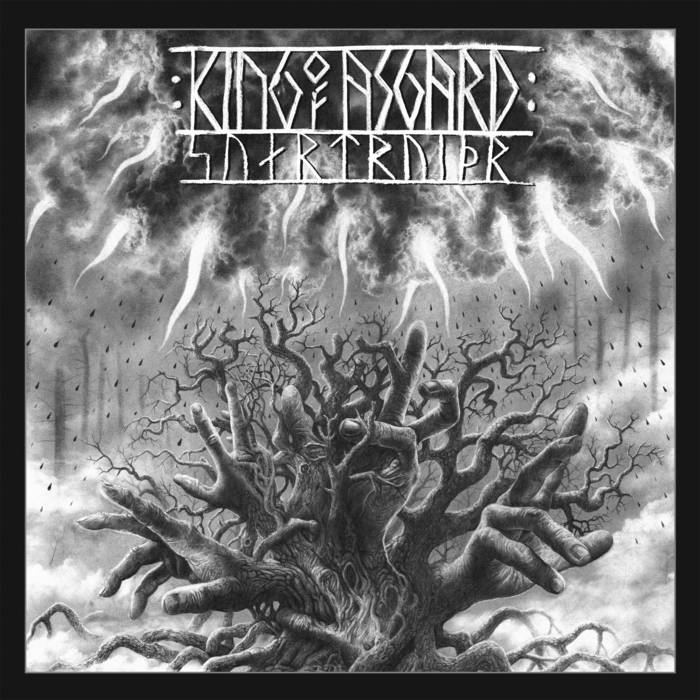 Svartrviðr
by King of Asgard

Sweden’s King of Asgard has been exploring elements of their Nordic heritage for the better part of thirteen years, using a combination of melodic black and death metal that went for a more methodical and powerful approach.  Where bands that usually get tagged as Viking or pagan oriented metal sometimes take a more theatrical or whimsical tone as they explore these ideas, King of Asgard’s always kept a more grounded and serious approach while still reaching some soaring heights with their melodies.  This year’s Svartrviðr may just be their darkest yet, leaning a bit more towards black metal than before and continuing on with the new lineup first heard on 2017’s Taudr.  Although some moments do run a bit long and the album loses a bit of steam by the end, this is still another noteworthy effort from a group that’s better than the stereotypical “Viking” metal out there.

Taudr had started to showcase some lengthier songwriting and that’s been expanded upon considerably on Svartrviðr, as not only is this King of Asgard’s longest full length to date but the majority of the tracks run between seven and nine minutes in length.  This allows the instrumentals to spread outwards with a sense of grandeur while maintaining the methodical pace the band has become known for.  Rather than going full melodic death metal with speedy choruses, the songs here tend to stick with slower or mid-tempo approaches and shift over to pummeling faster pace sections at key moments.  While there are still songs where the material heads into melodic death metal territory and captures some of those powerful and soaring peaks, the tonality skews a bit more towards the black metal side of the spectrum with much darker and jagged riffs.  King of Asgard breaks these up with acoustic interludes and other transitional elements that help to give each piece a bit more nuance, but there is still a sense of uniformity to how they build up.  Admittedly the emphasis on longer songs proves to be a bit of a double edged sword, as it allows for some of the most stunning atmospheric peaks and powerful instrumentation the band has offered to date yet there are some moments that seem to drag.  In particular, the end of Svartrviðr has some pacing issues, as the sudden transition from acoustic instrumentation to raging black metal on “Harmdauðr” seems a bit choppy and the acoustic closer “FæigR” feels like it could’ve been merged into one of the other tracks.  Personally, I would’ve placed these elsewhere on the album and let the title track fade out to finish things off, but it doesn’t completely derail the listening experience.

The vocal combination of Karl Beckmann and Jonas Albrektsson has always been one of the standout elements of King of Asgard’s material, as it’s allowed for equal bursts of harsh and clean pitches.  Opener “Frôðr” begins with raspier growls that have a warriorlike cadence with cleaner chants being used during the choruses, and the performance continues along this path while still managing to shake things up.  Some of the later songs bring the clean singing into the spotlight, with “Ammobiærg” proving quite stunning with how it trades off on the soaring melodic pitches and the jagged screams.  Fitting in with the emphasis on Norse mythology and heritage, the screams and growls have a rhythmic approach that wouldn’t seem out of place as a Viking battle cry, and it suits what King of Asgard is going for perfectly.

Over time King of Asgard has started to head towards a bit more black metal, and with Devo (ex-Marduk) acting as producer once again this latest album captures the darkness and power of that side of metal quite well.  Some moments may drag a bit and I did find the end of the album to feel a bit unevenly paced, but the group has still managed to write some truly powerful material that will draw in fans of both melodic death and black metal.  If you’ve gotten tired of the more party oriented or overly theatrical takes on Viking and pagan themes in metal and have yet to check these guys out, this is a great jumping on point.  Svartrviðr is available from Trollmusic.