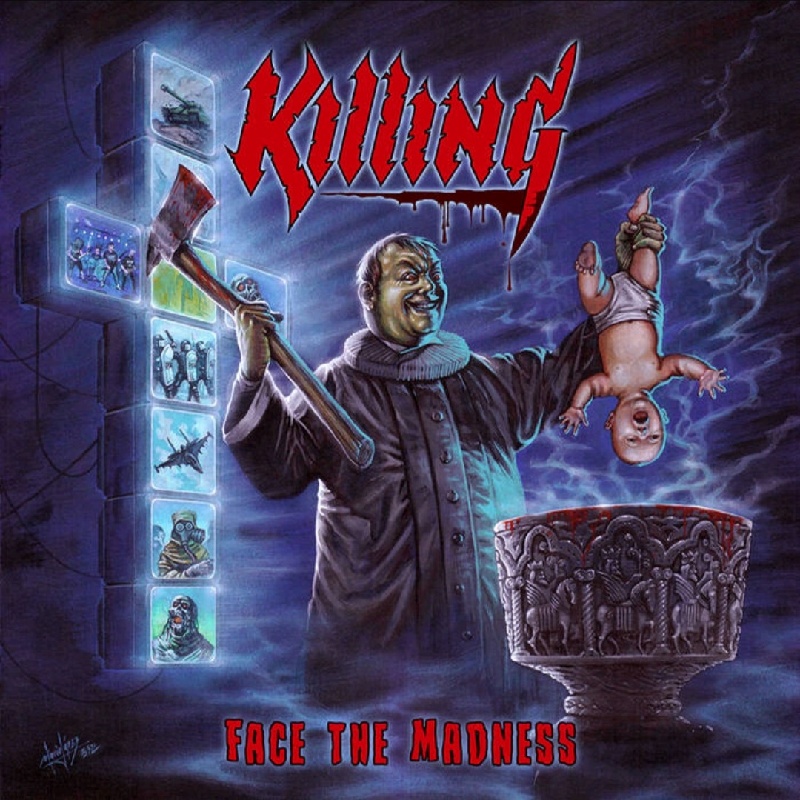 Face the Madness
by Killing

This past week seems to have been Danish metal and rock review week, as the past three reviews I’ve written have been for bands from Denmark and now I’m adding a fourth.  Today the focus is on thrash metal group Killing, who formed back in 2013 with the aim of capturing that same speed and aggression that defined the genre during its classic period in the 80s.  They’ve taken their time over the past eight years refining their material, only putting out an EP in 2018 before this year’s Face the Madness full length, but it’s clear this extended time to refine their ideas has been put to good use.

My taste in thrash skews towards the old-school variant of the genre, so the blistering opening “Kill Everyone” instantly drew me in to Face the Madness.  Killing pulls from that rabid and speed driven version of thrash that emerged early on, instantly recalling the earlier efforts of Slayer, Kreator, and Sodom but with some modern polish.  Writing wise it feels like you’re being pulled right back to the early 80s as thrash was beginning to take some of the speed of NWOBHM to more extreme levels.  While that’s certainly a sound you’ve likely heard from hundreds of bands in the decades since the classic albums came out, there’s still something incredibly appealing about it when done right and that’s where Killing succeeds.  The majority of the nine tracks have scorching riffs that stand out and don’t overstay their welcome with unnecessary filler, and even when the band decides to slow things down slightly and explore some melodic elements on closer “Killed in Action” they still manage to keep it interesting.  Face the Madness does have a polished production that still allows the rawer tonality of the guitar and bass to break through while still providing the clarity of a modern thrash album, and while I’m sure some might prefer if the sound here had been even rougher, I found that it worked and allowed the riffs and vocals to really shine.

Bassist Rasmus Soelberg also handles the vocals on the album, and rather than going for a gruffer singing pitch or lower growl he instead goes for higher, raspy screams.  The abrasiveness combined with the over the top lyrics works well and gives Killing a horror movie aesthetic while also being a bit tongue in cheek, which is something I really appreciated.  Soelberg comes across somewhere between Tom Araya (Slayer), Mille Petrozza (Kreator), and Athenar of Midnight which is not exactly the combination I was expecting when giving this one a first listen.  But it works, and with some gang chants being thrown in by the other members on some of the songs the performance captures what you would expect from the more extreme side of thrash.  The production is once again worth mentioning as it puts these raspy screams front and center, keeping the intensity at a high from beginning to end.

These guys clearly understand what has made classic thrash so enjoyable and able to stand the test of time, as their debut offers up plenty of catchy yet blistering riffs and over the top vocals.  Killing does have room left to further define their own style within the genre, but the fact that they’re pulling from several different variants of thrash rather than simply copying the European or American approach works in their favor.  I’m excited to see how they’re able to evolve and shake things up further, but this debut is still one of my favorite thrash albums of 2021 and that’s a fantastic level to be at already.  Face the Madness is available from Mighty Music.