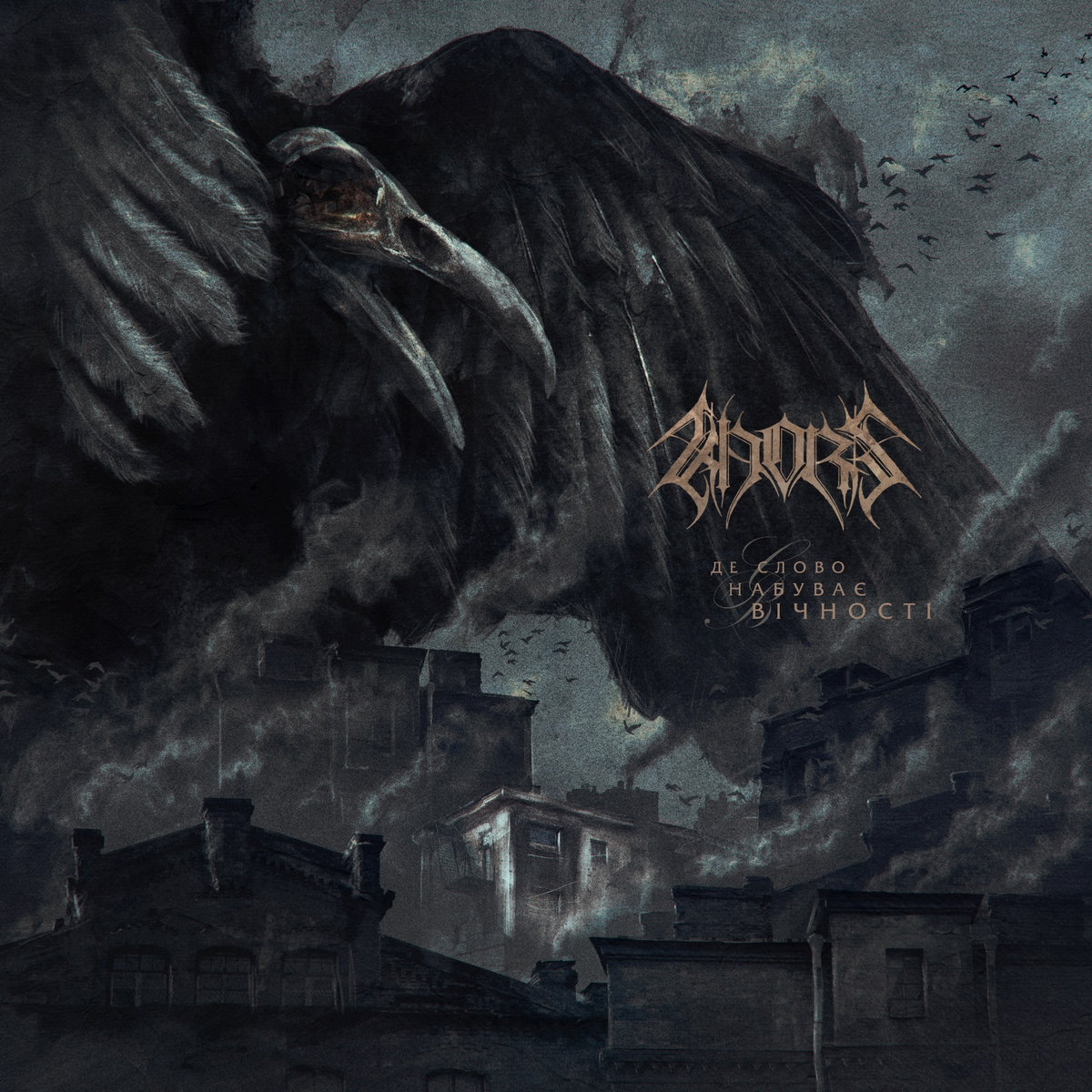 Where the Word Acquires Eternity
by Khors

Khors has been a prominent name within Ukrainian black metal for the better part of sixteen years, coming into prominence in their home country with the likes of The Flame of Eternity’s Decline and Cold.  For many internationally, myself included, the first taste of their material would come courtesy of 2008’s Mysticism, which was very synth focused black metal that spent a lot of time focused on slower tempos and dense atmosphere.  In the years that have followed the group has continued to tweak this formula, adding more aggressive riffing alongside the somber and melodically focused elements, and for their latest full-length Where the Words Acquire Eternity they’ve struck a perfect balance between these two sides.  With an overarching concept that explores the Slovo House, where many influential Ukrainian writers, actors, and public figures lived during the country’s cultural Renaissance period until a crackdown by Stalin, the result feels truly haunting and finds Khors reaching staggering new heights.

Though the group has had a stable lineup for the past ten years, Where the Words Acquire Eternitybrings significant change with it as guitarist Geld departed last year, with newcomer Andres joining shortly after.  While significant shakeups can sometimes bring radical stylistic changes with it, Khors has retained their identity as masters of more atmospherically inclined black metal, showcasing the perfect blend of pummeling aggression and somber, haunting melodic passages.  “Starvation” may be one of the most powerful opening tracks the band has ever written, as it comes roaring to life with blast beats and soaring guitar leads that have that familiar mystical keyboard sound woven into the layers.  But where this may suggest that the instrumentals are going to follow a more straightforward black metal template this time around, by the time you reach “Blissforsaken” it becomes clear that you’re in for a truly dynamic listening experience.  Here Khors masterfully weave spine chilling melodies and somber, reflective passages in with abrasive black metal riffs, creating a narrative as much with their instruments as they do with the lyrics.  It’s a delicate balance that the group has come close to before, but they’ve perfected it here, allowing each song to reach some truly stunning heights and ensuring the listener stays fully absorbed in their material from beginning to end.  Given the concept around Slovo House, it makes sense that there are some genuinely beautiful and reflective moments when the guitar work mellows out, but they often lead to destruction and chaos.  “Beneath the Keen Edge of Time” also may be one of the best songs Khors has ever written, with dark and haunting guitar and bass work weaving in and out of the harsher elements to create a ghost-like presence.

Jurgis joined the group close to a decade ago, so if you’ve spent time with Khors’ more recent material you will find the performance here to be familiar.  That’s not a bad thing though, as Jurgis has a lower-pitched scream that stands tall above the rest of the band and has a commanding presence.  Given some of the peaks that the instrumentals reach, having the vocals front and center in the mix only adds to just how powerful the material is.  While bands that go for an atmospheric or melodic variant of black metal have incorporated singing and other ranges into their music over the years, Khors has opted in the past to utilize this sparingly to emphasize specific passages rather than making it a foundation of their ideas.  This is once again true here, as you do get some singing on “The Sea of my Soul”, but for the rest of Where the Words Acquire Eternity Jurgis continues to do what he does best and his performance remains versatile enough to keep from becoming repetitive or overbearing.

Although Khors has had some incredible songs over the years, their albums haven’t always maintained that level of writing from beginning to end.  But here they’ve absolutely nailed it, providing one memorable riff after the next and merging haunting atmosphere with powerful, destructive climaxes.  They haven’t reinvented the sound that got them started a decade and a half ago, but they’ve refined it to its most potent level yet and have released one of the best black metal releases you’ll hear this year.  It’s exciting to watch an established band like this only continue to get stronger with every album, and right now Khors is looking unstoppable.  Where the Words Acquire Eternity is available from Ashen Dominion.