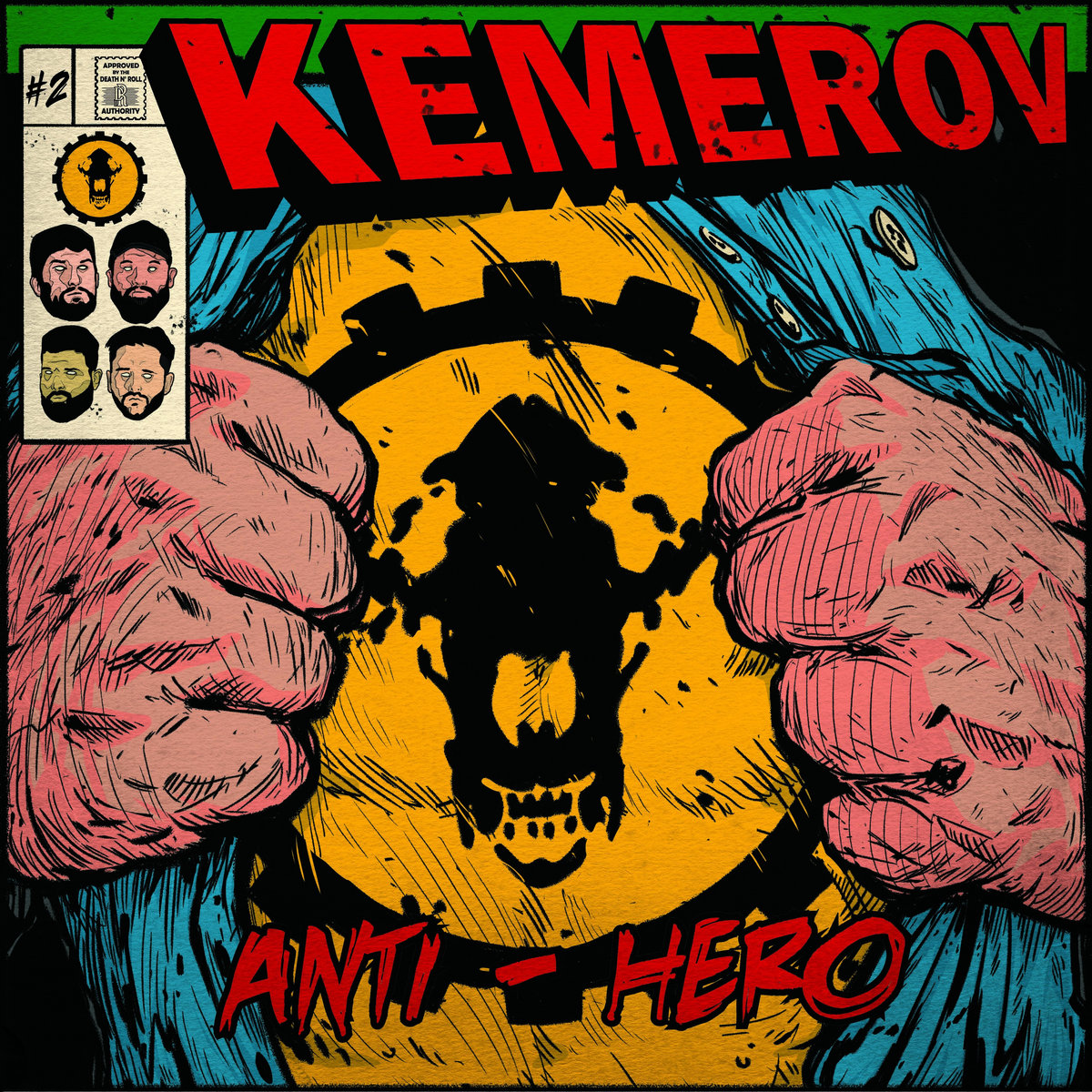 Five years after their debut full-length, Greek punk/death metal band Kemerov has returned with Anti-Hero which finds them making significant tweaks to their sound.  While 2017’s FMKD felt like a hardcore/punk and rock ‘n roll album that had some dips into death metal, this time around the group has brought that buzzsaw tone with them and injected a bigger dose of Entombed’s Wolverine Blues into their songwriting.  It’s an album that comes through with even more intensity and grittiness than its predecessor, and while it does lose a bit of impact by the end there’s still plenty here that will please fans of death metal and punk alike.

The promo material for Anti-Hero describes it as Turbonegro playing death metal, and I think that’s an appropriate comparison for the majority of the songs.  “Fabricated Gods” come lumbering in with that buzzsaw HM-2 tonality, making it seem as though you’re in for another traditional Swedish death metal worshipping album, but it isn’t long before the rhythms shift in favor of some punk swagger and the type of death ‘n roll that Wolverine Blues helped to define back in the 90s.  From there Kemerov switches up the formula from one song to the next, injecting some unexpected melodic flourishes on “Anti-Hero Tights” while “Count Me Out” has some speed metal type leads that remind me of bands like Midnight and Hellripper.  In addition to the punchier punk and rock ‘n roll edged tracks, Kemerov also slows things down on the longer tracks and goes for some straight up death metal and even a little death/doom.  Admittedly this is where Anti-Hero loses some of its impact for me, as when the band cracks the give minute mark things start to drag and don’t have that same infectious energy.  This is especially true for closing song “Black Right Hands”, which moves back and forth between raging death metal and slower doom tempos but stretches out for far too long, even with its admittedly haunting piano outro.

Vocalist Matt Karampalios utilizes a rougher edged scream/growl that has the grittiness of death metal but is a bit easier to decipher lyrically than is typical for anything Swedish HM-2 inspired.  There is some backup singing on some of the tracks that has a bit more of a punk and rock ‘n roll feel to it, and this is where I think Kemerov manages to further distinguish themselves from some of the others going for this style.  The rawer tone of the screaming/growling combined with the punk energy proves to be infectious, and it helps that the album has been mixed in a way that allows the vocals to be front and center.  Anti-Hero also utilizes some samples on “Channeling Hatred” and “Hate Speech”, which provides some additional variety without taking away too much from the overall flow of the material.

Kemerov’s made some significant shifts since their debut, pulling in that HM-2 tone and incorporating even more death metal into their punk and rock ‘n roll foundation.  I’m not quite sold on their exploration of slightly longer tracks and slower tempos just yet, as the best moments on Anti-Hero remains those that come in with that faster death metal blasting and infectious punk grooves, but I think with a few more tweaks they can do both elements justice in the future.  With that being said, death ‘n roll of any type remains very appealing for me and songs like “Anti-Hero Tights” are likely to stay in my rotation for some time to come, so those with similar tastes will want to pick this album up.  Anti-Hero is available from One Two Six Records/Vinylstore.gr.