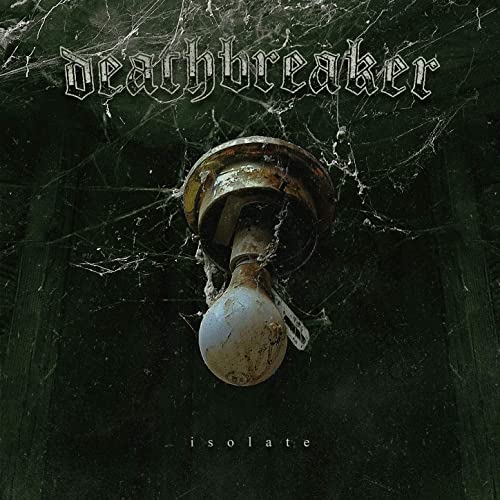 Originally known as Redeem the Exile, hardcore/metalcore band Deathbreaker joined the Facedown Records roster with debut Disconnect back in 2017, displaying equal amounts of jagged and heavy metalcore alongside the melody of mid-2000s post-hardcore.  Three years later the band has returned with their sophomore effort Isolate, which finds them shedding almost all the melodic tendencies in favor of dense and dissonant metalcore that recalls the tonality of Converge and Botch at times.  For listeners that have been with this type of music since the 90s or early 2000s there’s something undeniably nostalgic about Isolate, but Deathbreaker does the style justice and keeps it feeling relevant a few decades later.

It does take a couple of songs for the instrumentals to really unleash their full potential at listeners, as this band is at their best when they’re unleashing a fast and dense wall of jagged and dissonant guitar work at listeners that moves seamlessly into extremely heavy breakdowns.  That’s not to say that the first few tracks don’t equally pummel you, as opener “Pit Viper” builds up with a dark, tense riff that leads into chugging riffs and guitar tones that really nail that metallic hardcore and metalcore tone.  But it’s songs like “Alone” and “Choke” that really pulled me into Isolate and had me hitting the repeat button over and over again.  Here Deathbreaker lets their guitar work go wild and falls somewhere between Converge, The Chariot, and Norma Jean with sheer abrasiveness and the ability to change tempos and riffs from one minute to the next.  The band balances out these ideas well, providing listeners equal amounts of abrasive and dense riffs alongside slightly more traditional hardcore ones that slow things down to chugging breakdowns and mid-tempo passages.  It’s as aggressive and in your face as one could possibly want from metalcore, but the songs actually manage to stand out and don’t all blur into one endless breakdown which works to Deathbreaker’s advantage.  The only thing I’m not fully sold on yet is the longer tracks, as “Pit Viper” and “Spite” both crack the four-minute mark and do feel like their slower moments drag on for just a bit too long.

With how intense the instrumentation is, you’d expect the vocals to capture this same level of power and raw energy and that’s exactly what Deathbreaker is able to do.  The band’s singer has a higher pitched scream that is right at the front of the recording, allowing it to have an immense presence that holds your attention from one song to the next.  While Disconnect showcased some softer moments that brought in post-hardcore elements, the emphasis here is almost entirely on screaming and it’s clear that the group wants to be as in your face as possible for the entire album.  Although this approach can sometimes result in repetitive vocals when the pitch doesn’t vary that often, I didn’t find that to be the case on Isolate as there’s just the right amount of space between each verse that helps to break things up.  It’s great to find the energy level jump through the roof, and it’d be interesting to see if by album three Deathbreaker merges the mellower singing and spoken word of Disconnect with some of the sheer aggression of Isolate.

For album number two Deathbreaker has doubled down on the heavy aspects of their sound, offering controlled chaos with fast and dissonant riffs alongside chugging, Earth shaking breakdowns.  It’s a style that is reminiscent of some of the better known albums in metalcore from the late 90s and early 2000s while still coming through as relevant in 2020, and while a few of the longer tracks drag slightly there’s more than enough substance to make this album worth a recommendation.  This band is easily one of the more exciting in hardcore/metalcore I’ve come across recently, and I can’t wait to see where they go from here.  Isolate is available from Facedown Records.