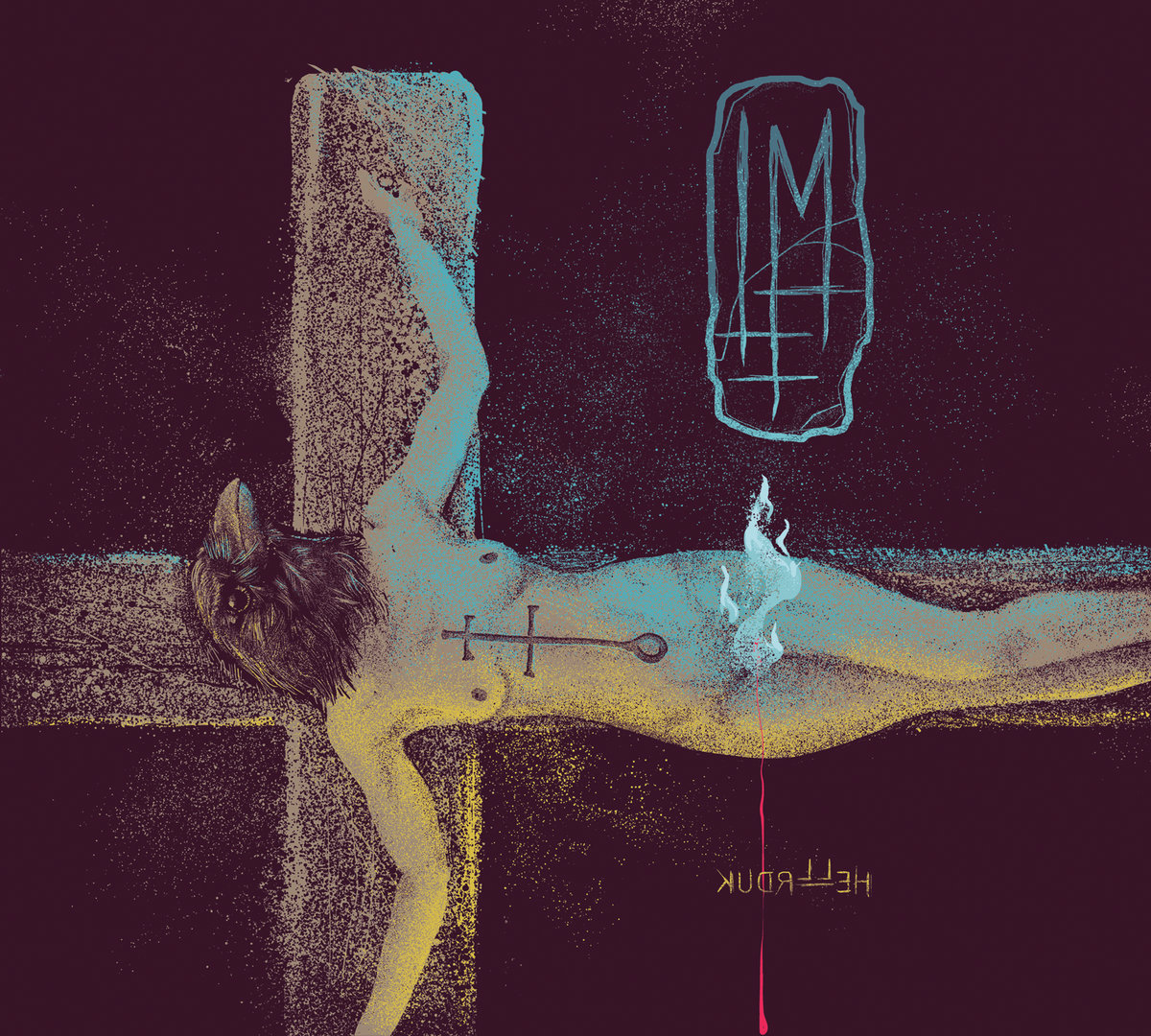 Isgherurd Morth is a new band formed by Siberian musicians Max Konstantinov and Peter Shallmin as well as French drummer Romain Goulon.  The three previously collaborated in experimental grindcore band Stench Price, but with this new project they’ve turned their attention towards black metal.  As you might expect from a trio made up of musicians who have been a part of more avant-garde and technically oriented bands, even though their debut Hellrduk takes influence from the atmosphere and colder sound of 90s black metal it explores it in a bit more of an unconventional way.  It’s not an immediately approachable listen, as dissonance and twists and turns will take a few times through to fully get a feel for, but those that want to dive into the madness will find this to be a genuinely intriguing debut.

Offering five songs that have an almost labyrinthian approach to the writing, Hellrduk is admittedly a lot to take in the first time through.  The tonality recalls 90s Norwegian black metal while also bringing in some of the more dissonant riffing of more recent bands in the genre, but the instrumentals tend to change things a bit more frequently than their inspirations.  In some ways it’s reminiscent of the transformation Enslaved went through in the early 2000s, only without the full-on progressive rock style keyboards, as there’s a similar atmosphere generated throughout Isgherurd Morth’s material that’s cold and alienating at some points but warm and hypnotic during others.  Blast beats and tremolo picking sometimes gives way to sudden shifts in tempo or drum patterns that bring in some jazzier influences, which may not be surprising given Romain Goulon’s time spent with Necrophagist.  For every moment that it lulls you into a hypnotic state, there’s often a jagged bass line or unexpected drum fill that keeps you on your toes.  For some that might prove to be a barrier, but I found that the more progressive and experimental nature offered some stunning moments while still providing to be a challenging listen.  The last two tracks switch things up further with an even greater emphasis on melody, bringing some brighter textures that recall a bit of the blackgaze branch of black metal that’s become prominent in the last decade, but with bass work that still comes off closer to progressive death metal.

Peter Shallmin handles the vocals throughout Hellrduk, and he brings an extremely high pitched and raspy scream that at times feels genuinely unsettling.  The sheer amount of power and the shrillness of his vocals remind me quite a bit of Endstille when Iblis was their front man, which only made the performance more appealing for me.  In addition to the raspier screams and shrieks there are also some lower growls that are often used at the same time, giving the material the sound of descending into madness.  It’s sometimes hard for newer bands to capture the same sense of insanity and intensity that the Norwegian second-wave had to offer, but Isgherurd Morth is able to replicate this with ease.

Despite its shorter run-time, there’s a lot to take in throughout Isgherurd Morth’s debut.  It captures the dissonance and harsher landscapes of black metal but runs them through a more progressive approach, sometimes employing the same type of sudden transitions and precision that one might expect from progressive/technical death metal.  The fluid nature in which these songs unfold may make this a bit more of an acquired taste for some, but if you’ve found the denser and whirlwind nature of some black metal bands appealing then this album is well worth spending some extended time with.  It seems like there’s room for the trio to expand upon these ideas even further and put even more of a unique stamp on the genre, so I’ll be watching to see how they build upon this strong foundation.  Hellrduk is available from Repose Records.