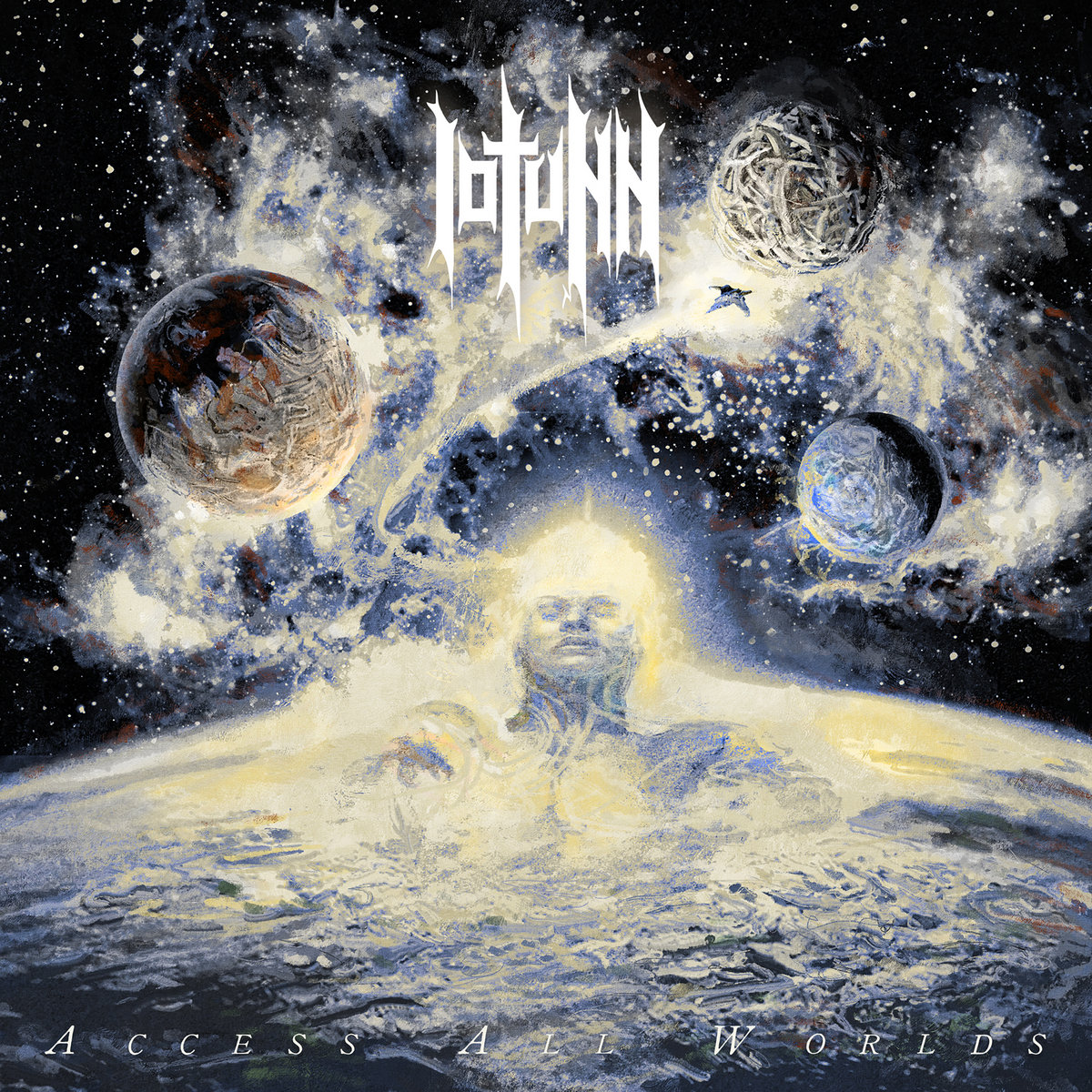 Iotunn’s debut full-length has been a long time coming, but the Danish metal band has made sure the wait has been worth it.  Formed in 2015, they released an EP titled The Wizard Falls in 2016 only for their original vocalist/bassist to leave a year later.  In the time that has passed since that change, the remaining members regrouped with Hamferð’s Jón Aldaráon vocals and Sunless Dawn’s Eskil Rask on bass and put the final touches on Access All Worlds.  It’s an ambitious record that pulls just as much from progressive and power metal as it does black and death metal, and with grandiose build-ups that pay off beautifully Iotunn’s attention to detail really pays off.

Any time an album crosses over the hour mark I am a bit wary that the material will overstay its welcome and fall into repetition or filler, but Access All Worlds came as a pleasant surprise with how quickly that hour seems to go by.  The longer songs make sense given the progressive nature of Iotunn’s music, but it’s important to note that when I say “progressive” it’s not in the same context as the modern definition of what prog metal usually entails.  Instead, the focus of the songwriting over these longer spans that feel like they’re telling a story through the instrumentation itself reminds me of several the classic prog-rock acts from decades ago, but run through an appreciation of everything the extreme sides of metal has to offer.  There’s a lot to take in throughout Access All Worlds, with the eleven-and-a-half-minute title track and almost fourteen minute closer “Safe Across the Endless Night” regularly crossing over into different metal sub-genres from one passage to the next.  Where so many others struggle to pull all of these elements together cohesively Iotunn does so in a way that keeps you on the edge of your seat from beginning to end.  It’s hard to truly pin down this group into one area, as sometimes they bring earlier Opeth to mind while other times they have that same soaring melodic focus as power metal, all woven together without sounding quite like anyone else.  Songs like “The Tower of Cosmic Nihility” impress upon that first listen with harsher black metal tonality that gives way epic and spacey melodies, with new details often coming into focus as you spend more time with the material.

The grandiose scale of the instrumentation does plenty to draw listeners into what Iotunn has to offer, but it’s the vocal work of Jón Aldará that makes the album truly impactful.  Aldará has already delivered some stunning performances with Hamferð and Barren Earth and Access All Worlds may just be his best yet.  If you’re unfamiliar, opening track “Voyage of the Garganey I” gives a perfect idea of the soaring nature of the performance and just how versatile the vocals are.  The first hint of vocals come in the form of powerful growls that enhance the death metal and doom elements, but after a few minutes they transition over to singing that has an operatic feel and sometimes sounds like it could reach the heavens.  This is where Iotunn crosses over between power/symphonic metal and black/death metal, with the switch off between the harsh and clean ranges sometimes bringing Borknagar’s music to mind.  The dynamic nature of the performance keeps the vocals just as exciting as the instrumentation, which is something that is sometimes a rarity even when metal bands have a more progressive or experimental focus.

While the EP showed plenty of promise, Access All Worlds completely transforms Iotunn into a band not to be missed.  Their ability to bridge the gap between the heavier variants of metal while continually emphasizing sweeping melodies is incredible, and the way that each song tells just as much of a narrative with its instrumentation as it does its vocals and lyrics makes this an album that listeners will have in their queue for many months to come.  Beautiful and powerful in equal capacity, Iotunn have truly impressed me.  Access All Worlds is available from Metal Blade Records.