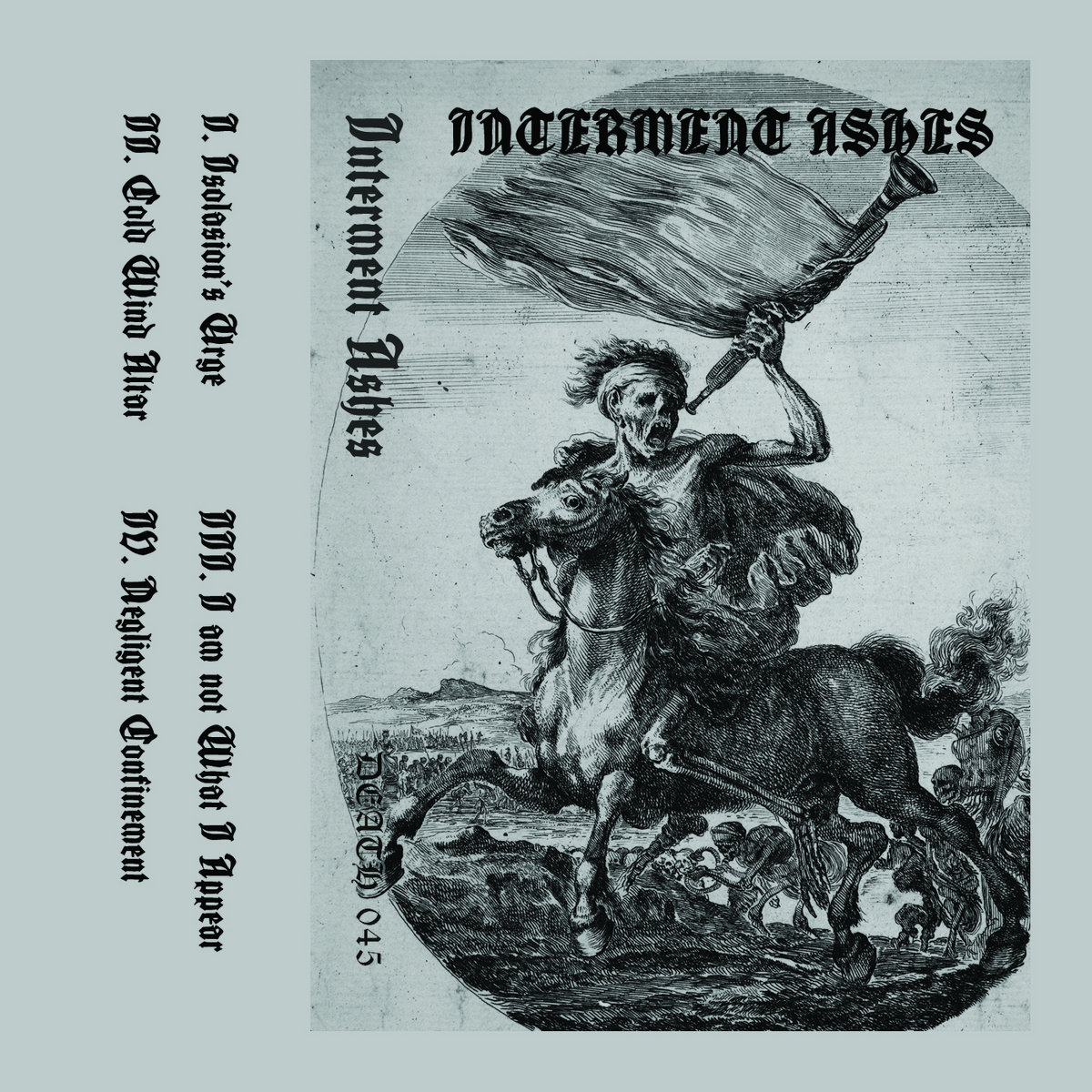 Formed by members of US black metal band Ritual Clearing in 2020, Interment Ashes retains some of the rawness and second wave influences of that group while heading off in a more atmospheric and punk infused direction.  This year’s self-titled EP brings slight tweaks to the tracks from their 2020 demo and adds two new ones into the mix, showcasing equal amounts of sprawling songwriting and more direct attacks on the listener.  Sometimes sounding like an American answer to the dominant Dutch metal scene while veering into first and second wave Norwegian black metal territory at different points, this EP demonstrates that even at this early stage Interment Ashes may be ahead of the curve.

The two tracks from the demo bookend the EP and showcase a similar vision in terms of approach that emphasizes dense layers of guitar and rumbling bass lines with subtle keyboards adding a considerable dose of atmosphere.  What immediately drew me in were the similarities to some of the lesser spoken Norwegian second wave efforts like Gehenna’s First Spell as well as the flourishing Dutch black metal scene.  “Isolation’s Urge” builds these elements up slowly, but the rumbling punk sounding bass lines and mystical feeling emanating from the keyboards and guitar layers brought forth comparisons to Solar Temple and Turia.  “Cold Wind Altar” and “I Am Not What I Appear” is where Interment Ashes are already showcasing that they’re more than happy to shake up the formula, with the former opting for equal amounts of blasting and punk-edged grooves while the latter gets even more adventurous and adds in some guitar melodies that bring a bit of beauty and grandeur into the otherwise gritty sound.  During these passages Interment Ashes also reminds me of Funereal Presence, as there are some similar transformations of first wave influences though how both bands get there differs.  That’s admittedly a lot of name dropping yet the material here still manages to sound fresh, and when the songs reach their peaks there are some stunning and powerful melodies that have an icy chill yet draw you in with their mystical qualities.  Admittedly the shortest and most straightforward ideas on “Cold Wind Altar” are what stands out the least, showing that there’s still room for further growth, but the strength of the other three as they twist and turn with equal amounts of abrasiveness and beauty have kept me coming back for more.

While the guitar and keyboards may adopt some softer yet still dark tonality into Interment Ashes’ material, the vocals remain raw and abrasive throughout.  This doesn’t mean that they simply stick with the same pitch for the entire EP though, as even on opener “Isolation’s Urge” there’s a change around the halfway point.  The beginning of the song has extremely raspy and distorted screams that just barely break free of the layers of instrumentation, and this adds to the rawness considerably.  But then the approach shifts to a slightly cleaner tone that comes through a bit closer to the type of screaming/shouting you’d hear on a punk record.  There’s still that same grit and fire behind the performance, but it gives some distinctive edges to the vocals that are already helping to differentiate Interment Ashes for me from other US black metal newcomers.

Plenty of the fire and violence from second wave black metal is reflected in Interment Ashes’ debut, but their overall approach takes a much more introspective and atmospheric angle.  It’s touching upon some of the more mystical and hypnotic melodies that have come to define the Dutch black metal scene in recent years which is a bit rarer coming from the US, and there are already nuances that show this duo starting to head in their own direction.  They’ve left themselves plenty of room to grow, especially when it comes to the shorter and more direct elements, but the writing still proves to be intoxicating and makes this EP another early 2022 highlight.  Interment Ashes is available from Eternal Death.