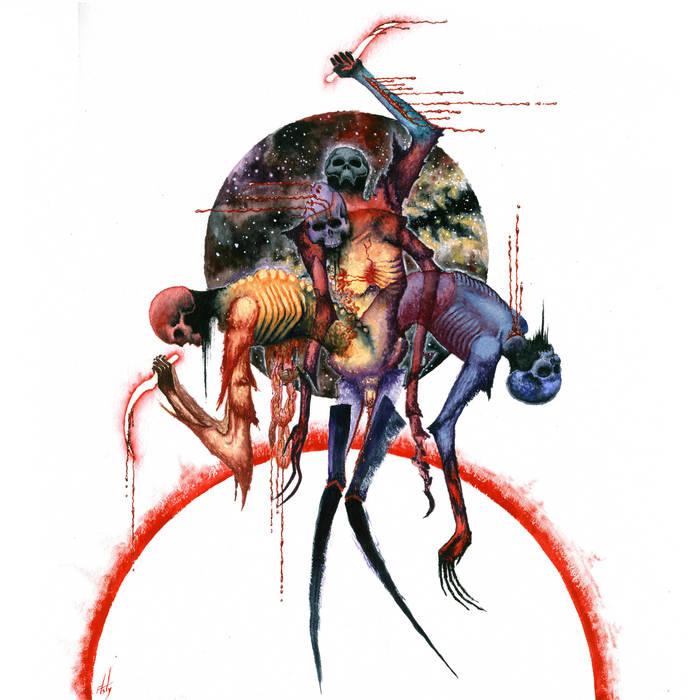 Immortality Through Quantum Suicide
by Xythlia

What I Like: True to its title and cover, one depicting self murder through Dark levels of space/time distortion, this album really is utter outerdimensional insanity. Xythlia's inhuman nailgun blasts and wickedly compressed guitar tone sound as if they are suffocating every inch of the mix. Chaotic, noodling mathcore riffs and djenty Meshuggah chugs combine the fierce technicality of Beneath The Massacre with the structural anarchy of Psyopus. "The Eye Bath" also draws comparisons to Frontierer with its pewpew lazer gun guitar sounds, becoming a fast favorite as a result. That's not even to mention the truly unhinged vocals belting pure bile into infinity. Their reckless abandon reminds me of the now defunct The Apex; especially intense when combined with the enthralling D-beats of "To Defy Inevitability." It's like Pig Destroyer on steroids. And in what feels like the natural direction in which this all seems to be going, the album frequently devolves into pure dissonant noise on interludes like "Post-Ironic Indoctrination."

Critiques: There are a few moments here and there where the compositions seem to unravel a little too far, leading to instrumentation that occasionally feels random for the sake of random. These are brief and relativey few, but it's the one nitpick that I could think of each listen.

The Verdict: Once more, it's these shorter releases that prove to be the most explosive in 2020. Immortality Through Quantum Suicide is 24 minutes of unrelenting, technical anarchy that has found Xythlia a lifelong fan for sure. You should consider jumping on that train as well.