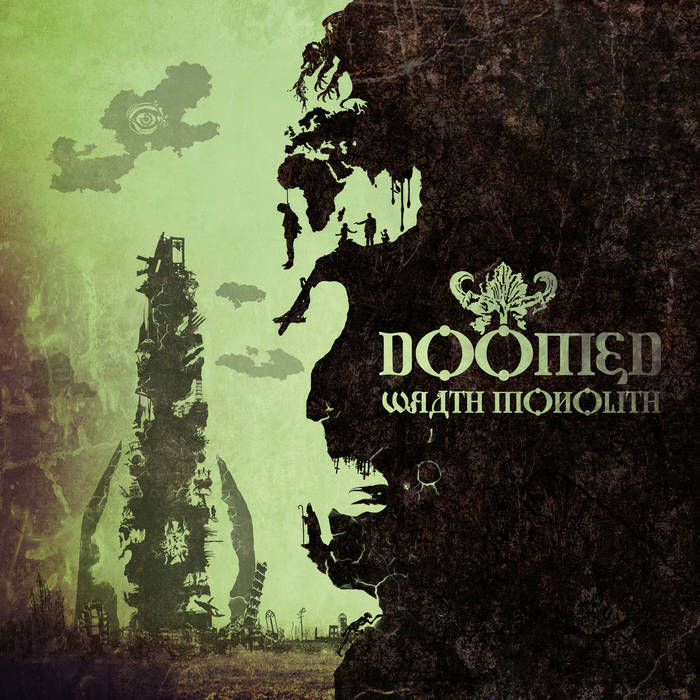 I'll have my Doom heavy on the Death, please

I have always been quite choosey about my doom metal. Or, as the hardcore doomers might say, I just don't “get it.” I think a lot of it comes down to guitar work. A player myself, this tends to be the first thing that my ears go to. While I agree that I am somewhat missing the point of funeral doom in looking for hooks, that doesn't make the endless dirges of sustained power chords any more interesting for me to listen to. Fortunately, Doomed doesn't see these elements as mutually exclusive.

Wrath Monolith instantly caught my attention with its fusion of death metal vox and riffs with funeral doom atmosphere. Vocals are primarily deep growls with the occasional retch. Meanwhile the guitars provide a dual trudge of crunchy chords with effects-laden leads that are simplistic, but highly infectious and well-crafted. Songs run the gamut of slow, atmospheric marches like opener, “Paradoxon” to more mid-paced, palm-mute heavy affairs like “Our Ruin Silhouettes.” The latter sports some excellent soloing and use of harmonics that made this a fast favorite.

There are some notable progressive elements as well. Songs may open with a misleadingly quiet, somewhat ominous piano or errant guitar picking only to evolve into a full-on head-banger death march (“Euphoria's End”). Doomed play with a a variety of sonic spaces with much success throughout the album. The tempo changes, shifting drum patterns, and ever-present personality of the lead guitar all serve to engage the listener whether the song is 5 minutes or 12. Additions of bells, horns, and subtle synth effects further Wrath Monolith's agenda to provide an air of class and as it levels everything in its wake.

Unfamiliar with Doomed, I decided to delve a bit deeper into their discography. Doing so only served to further improve my already high regard for this latest outing. While similar in overall sound, earlier works are a bit more 50/50 when it comes to the funeral doom and death metal. Songs felt slower and more depressive in atmosphere. With each album, the heaviness has been creeping closer to death, but the slogging paces of certain tracks have left them more firmly grounded in the extreme doom genre.

I feel that Wrath Monolith represents a larger leap away from My Dying Bride towards Morbid Angel. The mixture is far closer to a 70/30 in favor of the latter. “The Triumph – Spit” even has a portion that seems to forgo any doom elements altogether, leaving only a crushing wake of ferocious vocals and pounding double bass. There are other innovations as well. Songwriting is elevated with concise arrangements, more memorable hooks, and clear delineation between songs. Each track has its own personality while benefiting the overall aesthetic. The pacing is also stronger with more ups and downs.

For those who prefer Doomed's slower moments, I doubt you will find yourself disappointed either. There are still some melodic, more conventionally “doom-sounding” songs as with “Looking Back,” which features some moody clean singing and the trademark mournful vibe. Wrath Monolith is a veritable smorgasbord of emotional climates, but what is most impressive is how they are woven together to create a cohesive concept.

Final word: this is a highly recommended release for fans of all extreme metal sub-genres. With a very heavy dose of death, Wrath Monolith is doom metal for those desiring something perhaps more riff-driven. Far from a rote fest of drawn-out power chords and endless dirges, this album is filled with catchy hooks and punishing vocals. Furthermore, longtime fans will find familiar elements at play, but with increased vigor and presented differently enough to stand apart from Doomed's previous discography. The album is available for stream and purchase for the low price of 7 Euro, though they also offer a digipack and some excellent bundles for a bit more.