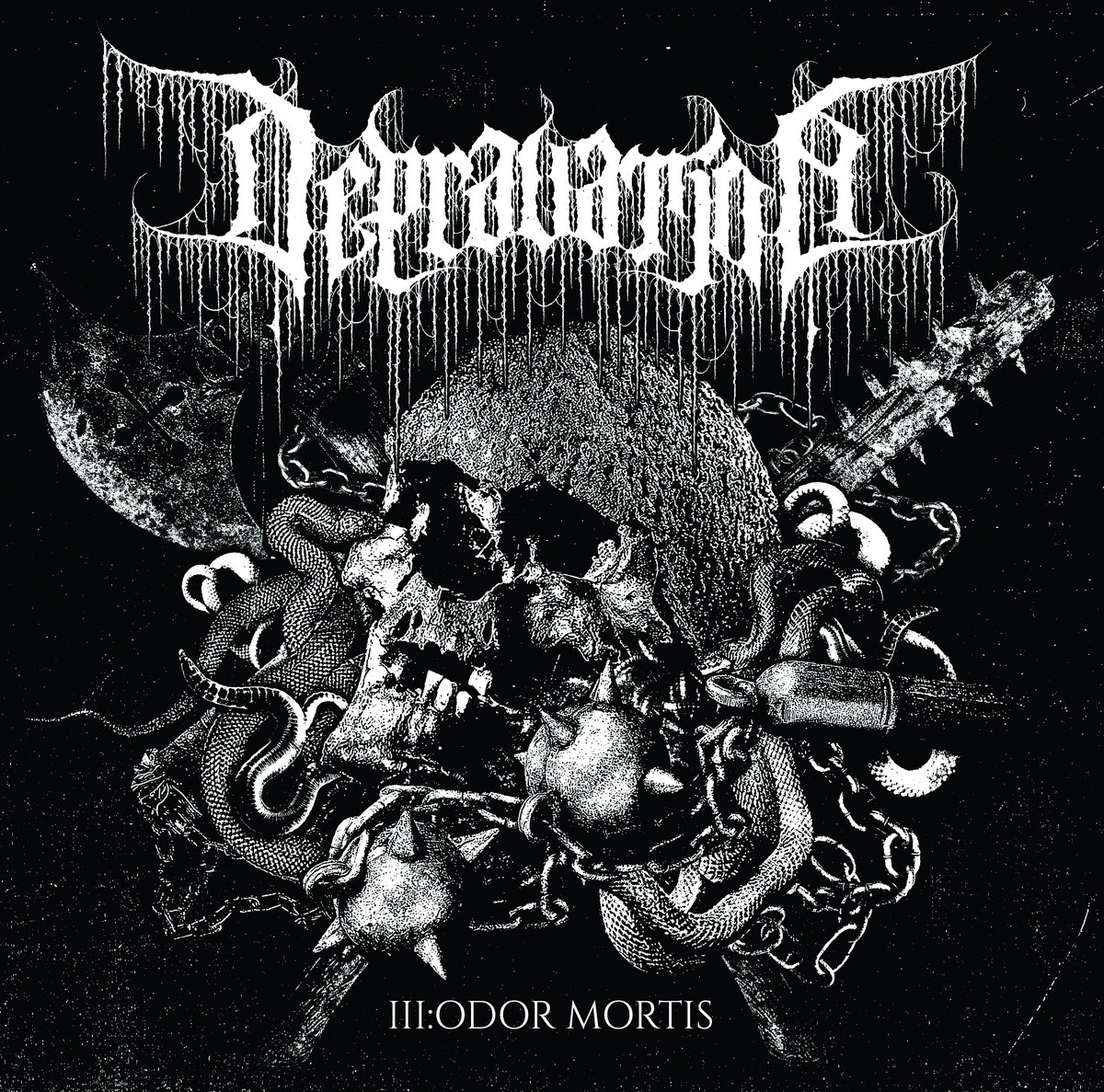 When it comes to German black metal, there have been quite a few bands over the years that have woven in elements of crust, hardcore, and sludge into their material.  Depravation is one of the latest acts to go through this transformation, incorporating a significant amount more black and death metal influences on their latest full length III: Odor Mortis having leaned a bit more towards the other end of the metal spectrum over the past nine years.  It’s an approach that works for the band and gives them a sound drenched in darkness and abrasive edges that’s hard to pin down.

The instrumentals may pull from just about every side of extreme metal over the album’s nine songs, but III: Odor Mortis starts off by showing off its take on black metal and blackened death metal.  “Casting Fear” is a great way for Depravation to kick listeners in the teeth with riffs that have that familiar iciness to the guitar tone and the denser, bottom heavy sound that blurs the lines between black and death metal.  Rather than sticking purely with blasting the group tends to slow things down frequently, channeling sludge and some hardcore grooves at times that allow the thicket atmosphere to spread outwards to almost suffocating levels.  Based on the first two tracks alone you might think you have Depravation all figured out, but after a few more songs go by you’ll come across some raging passages that are reminiscent of bands like Trap Them and Converge along with some slower ideas that pull in some more doom and sludge.  There’s a lot more variation to this album than it initially suggests, and the band is able to tie everything together into a cohesive listen.  Admittedly I did find across repeat listens that some of the more straightforward black metal moments didn’t stand out in comparison to the rest of the album, as they’re at their best when merging these slower and methodical atmospheric sections with sudden bursts of abrasive riffing.

Depravation’s vocals are one of the most intense elements of their material, as less than a minute into the album you’re greeted with extremely high pitched screaming that has the jaggedness of barbed wire and lower growls that bring in a bit more of a death metal sound.  There’s a decent amount of variation between the harsher pitches that makes the group feel less repetitive than some of the others that play this type of metal, but what really surprised me was the somber singing that takes over on closing track “Nothingness”.  It’s a somewhat subdued closer for an otherwise intense album, but it retains the same darkness and dread that the more intense screaming creates, which leaves a lasting impression.  I wouldn’t mind seeing Depravation using more of this vocal range down the road, as it works well within the confines of their overall sound.

There’s been a clear shift in this group’s sound since their earlier days, and they now combine just about every style of extreme metal with some of crust and hardcore.  It’s an approach that works in their favor, and while some of the more straightforward attacks don’t always hit the mark for me in the same way that the tracks that vary the tempo and let the dark atmosphere breathe do, there’s still a lot to like about what Depravation has achieved with this album.  III: Odor Mortis is available from Lifeforce Records.