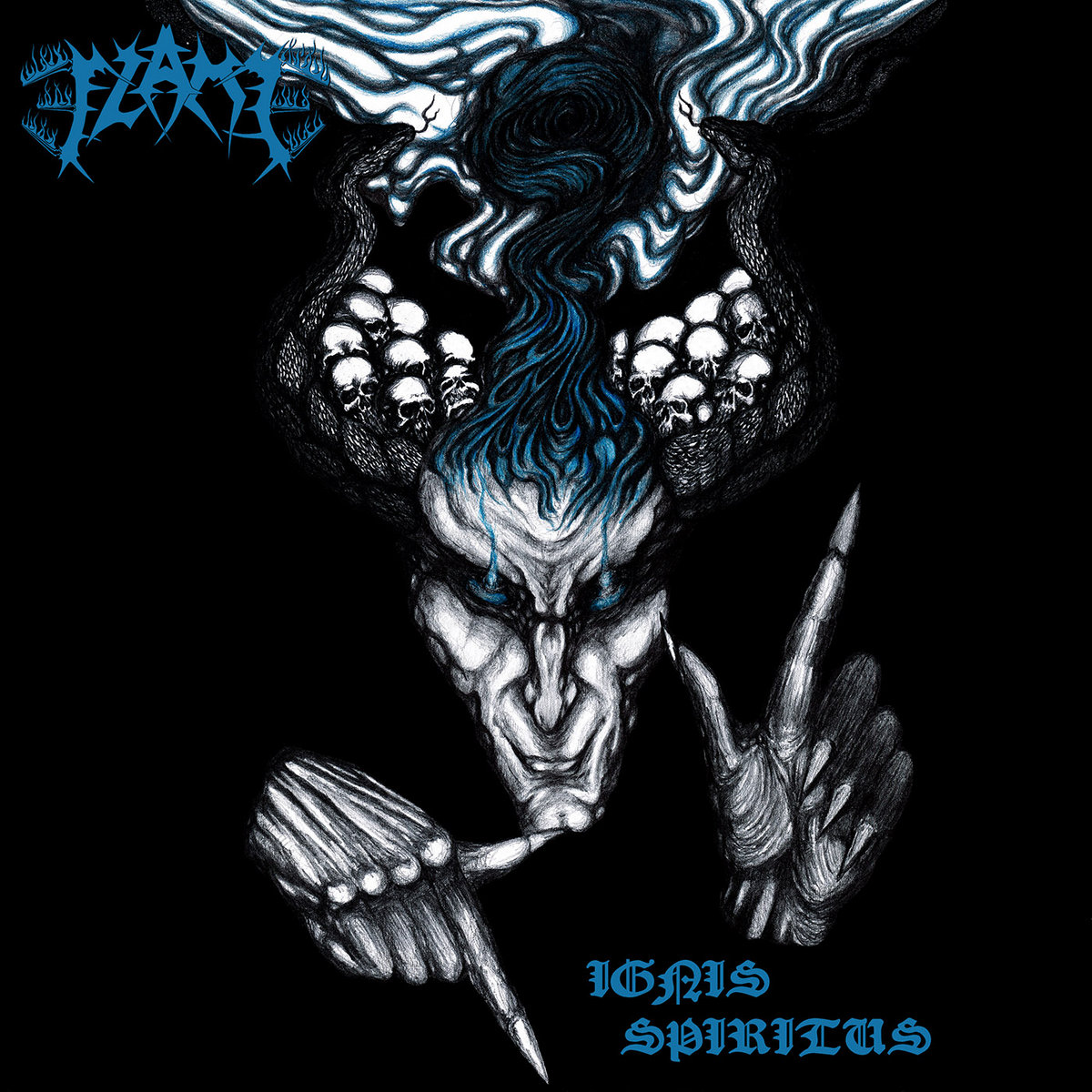 Finnish black/thrash band Flame was created in 1998 by former members of Urn and Barathrum, making a name for themselves with 2005’s Into the Age of Fire and 2011’s March into Firelands.  However, where some of the other groups of this type kept a steady pace going and put out material regularly, Flame’s discography has been far more spread out and they’ve been fairly quiet since March into Firelands.  With this year’s mini-album Ignis Spiritus they’ve finally broken that silence, and this new five track effort finds them stripped down from a four piece to the core duo of Blackvenom and Pimeä.  But even with this being the case, it’s clear that hasn’t held the group back from continuing to write some scorching black/thrash.

There’s something to be said for the consistency that these guys have offered over the past two decades, as despite how spread out their releases have been they’ve been able to provide some killer riffs to make up for it on each release.  This is continued with Ignis Spiritus, as you get a short and sinister intro that leads into “Firespirit of Rebellion” where the guitars immediately unleash scorching riffs at listeners.  What works well with Flame’s approach is they shake up the formula quite a bit throughout each of the tracks, moving from faster assaults to mid-tempo sections that showcase more of a traditional black metal feel.  You’ll find a pretty even split between black metal and thrash here, especially on songs like “Astral Crypt” which start off on the faster side and then slow things down significantly to let darker melodies and creepy atmosphere start to seep in.  Fans of classic black/thrash like Nifelheim and Aura Noir as well as traditional Finnish black metal from the 90s will find passages that grab their attention, and the balance between the two sides helps this material to stand out a bit more.  With that being said, the closing track “Force and Fire” does drag slightly at almost eight minutes in length and while there are still some scorching riffs to be found they do seem a bit too stretched out.  It’s not a dealbreaker by any means, particularly with the strength of “Primordial Storm” and “Astral Crypt”, but for me Flame’s sweet spot seems to be between three to five minutes.

Blackvenom’s raspy screams have been a staple of Flame’s sound since the beginning, and they’re delivered here with the same amount of power and grit that you’d expect from this genre.  “Firespirit of Rebellion” is your first taste of this, as the screams dominate from the first few seconds and there’s a rawness to them that sounds like what you’d expect if you were to see this band on-stage.  Ignis Spiritus follows this approach for much of its run-time with “Astral Crypt” serving as an exception, as Flame incorporates some chants and other ominous sounding pitches into the mix as they channel a bit more black metal on that track.  The vocals definitely have a familiarity to them, but the rawness and sheer force proves to be appealing.

After nine years and some lineup changes, Flame has emerged with a triumphant statement that captures the essence of black/thrash and has some killer riffs to back it up.  The last track may drag a bit, but there’s still plenty here that is up to par with the rest of their discography and that will keep listeners coming back to feel the heat.  Hopefully this mini-album is the start of the next chapter of the band and we won’t have to wait almost another decade for more, as there’s plenty of potential on display throughout.  Ignis Spiritus is available from Primitive Reaction.