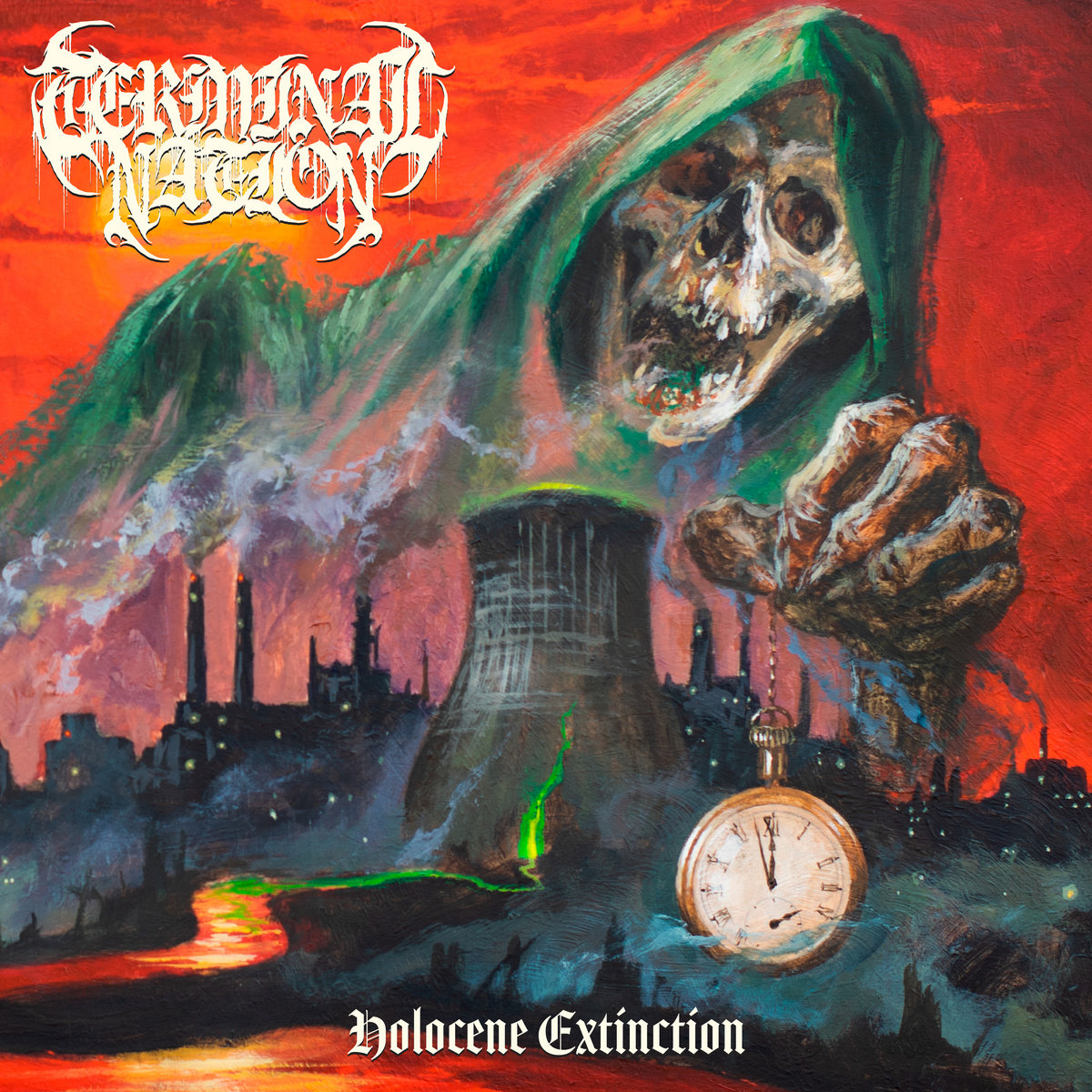 While metallic hardcore never truly went away, in recent years it has seen a bit of a resurgence in part thanks to bands that merge this crunchier riffing with elements of death metal.  Groups like Xibalba, Like Rats, and Creeping Death have all merged elements of hardcore into their raging death metal, and now Little Rock’s Terminal Nation has joined the fray with their debut full length Holocene Extinction.  But unlike the other groups mentioned earlier, these guys are rooted just as much in powerviolence and punk as they are metallic hardcore and death metal, allowing for quick bursts and slower grooves in equal capacity.  While they do fall into some similar patterns over the course of thirteen songs, Terminal Nation hits hard and with as much power as one could possibly want from music of this type.

Where a lot of bands in recent years have been leaning hard on Obituary and Entombed for inspiration and then adding in the crunchier grooves and scorching tonality of metallic hardcore, Terminal Nation takes it one step further and incorporates the type of quick bursts that you’d find in grindcore or powerviolence albums.  For every song that stretches things out with mosh pit worthy chugging grooves or that HM-2 chainsaw tone that wouldn’t sound out of place on a Swedish death metal record, you’ve got numbers like “Thirst to Burn” and “Leather Envy” that remind me a bit more of bands like Despise You with their relentless blasting and short lengths.  It’s an approach that is likely to give the material some appeal to both the metal and punk scenes, and Terminal Nation has plenty of substance to back up the regular stylistic shifts.  There are both blasting and groove-heavy sections that have stuck out upon repeat listens, and it helps that Holocene Extinctionhas been mixed and mastered in a way that allows the instrumentals to have maximum impact.  Rather than going for the thinner production quality that you sometimes find in powerviolence, here there’s a significant emphasis on the bottom end and each riff and drumbeat has real weight behind them that consistently pummel you into submission.  It makes a big difference and makes you want to crank this album up to max volume in order to get absolutely leveled by it.  Admittedly it does seem like when Terminal Nation settles into some of their slower grooves that they start to sound the same a bit, but the faster moments always seem to have something different that grabs you by the throat.

The instrumentals may pack a punch, but it’s the vocal performance throughout Holocene Extinction that really push things over the edge.  “Cognitive Dissonance” starts off with low growls that have a hardcore feel to them, but the pitch only seems to get more distorted and chaotic as the song progresses.  Terminal Nation only continues to vary their vocals with each track, as there are plenty of low and high ranges that are utilized and listeners are sure to be reminded of specific bands from across the metal and punk spectrum as they make their way through the album.  In particular, the sheer weight and grit of the screams and growls reminded me a bit of older bands like All Out War and Ringworm with a little bit of Tragedy thrown in for good measure.  There’s as much rage and force behind the vocals as you’d expect from a band in this type in the current climate, and with how dynamic the attack feels it goes a long way.

With the resurgence of metallic hardcore and death metal bands that incorporate hardcore elements into their music, there have been a lot of similar sounding albums being released over the past few years.  But Terminal Nation manages to stand out thanks to some killer grooves and bursts of faster powerviolence and grind amidst the chugging and buzzsaw riffing.  Fans of everything from Integrity to Dismember will find something to like here, and while some of the slower moments do blur together this is a strong first showing from these guys.  Holocene Extinction is available from 20 Buck Spin.