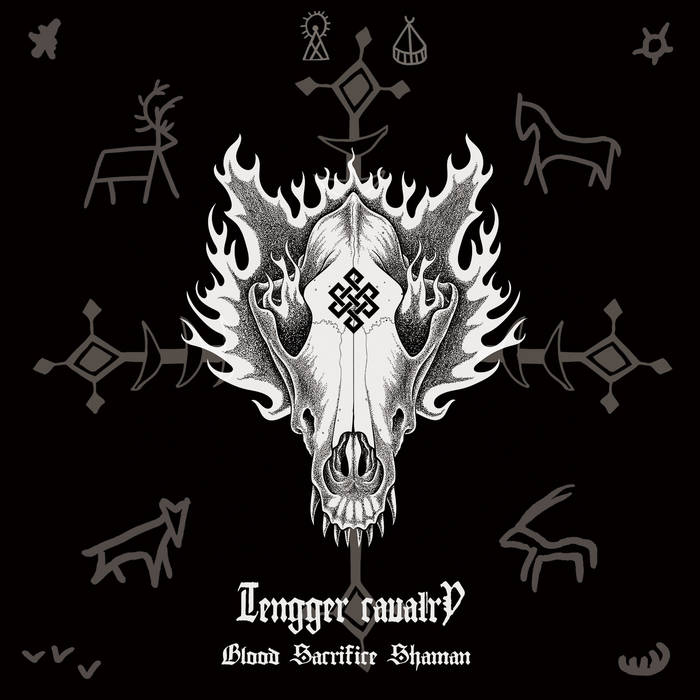 History Channel Metal. That is my personal tag for Tengger Cavalry's latest opus. While it is true that Blood Sacrifice Shaman is a reworking of the band's debut, this is anything but a re-record. What the original sports in black metal rawness, this 2015 version counters with a vision of beauty. Gone are most of the harsh vocals, replaced with an increased focus on throat-singing and instrumental compositions. Listening to this is a journey through time and a celebration of cultural heritage. This is quality metal even your mother could appreciate.

I made an important note in my review for Ancient Call that I think warrants repeating: there is not even a hint of parody in anything that Tengger Cavalry does. While I am a fan of acts like Ensiferum and Equilibrium, their take on folk metal is a decidedly more silly one based on costuming and audience fist-pumping. Those things are fun and all, but sometimes I crave a level of class and true appreciation for the real history behind these lyrics and arrangements. These are the things for which I find myself coming back to Tengger Cavalry time and time again.

Once more, they have not let me down. In fact, the atmospheric qualities that have been increasingly explored with each TC album have certainly reached some sort of benchmark. “The Wolf Ritual” is a masterful piece of art, perfectly incorporating traditional Chinese instruments with crunchy guitar chords. Placement and orchestration are delicate tools for which frontman, Nature, has a clear knack. Even shorter tracks like “Rootless” and “The Native” refuse to fall into the filler category with gripping string performances that warrant every ounce of your attention. Then there are the more typical folk-metal war marches of songs like “Horseman” and “Tengger Cavalry,” which feel like continuations of ideas from last year's equally spectacular Ancient Call.

Also of note is the improved level of production on this album. While there is a certain amount of charm I attribute to the raw-sounding distortion of previous releases, the increased lushness is something that does Blood Sacrifice Shaman oh-so-right. The reverb, balanced levels, and overall polish create an experience that is wholly immersive. Every instrument feels absolutely vibrant and alive. I want to step into the space that Nature has created and build a quaint little home on the landscape. Of course, then the hordes might come burn it down; but it would be worth it.

I want to say so much more about this album, but words fail me. This is something I would classify more as an “experience” than simply metal. As such, Blood Sacrifice Shaman is something you should explore for yourself. I realize that this sounds like a cop-out, as well as just an obvious thing to say about any album, but sometimes things just defy a standard reviewing format. In short, it's heavy enough to please the head-bangers while displaying more than enough mature songwriting skills to attract even the most high-profile director. Paging Quentin Tarantino. $9.99 on bandcamp and $8.99 on Amazon.