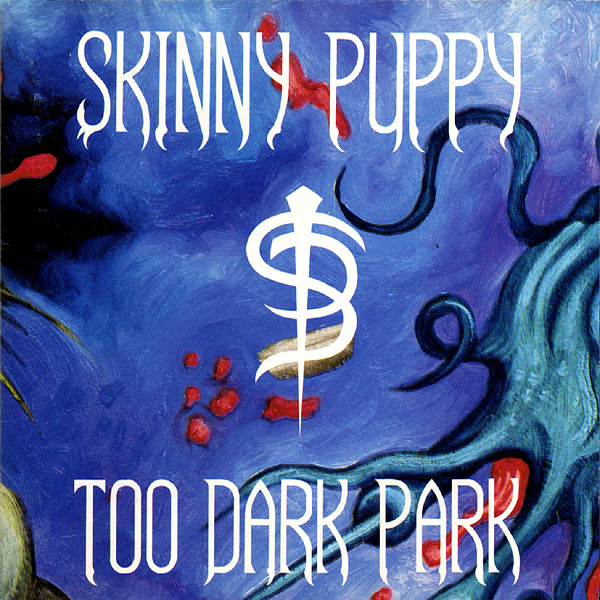 Too Dark Park
by Skinny Puppy

How do you commit a nightmare to recording? David Lynch has come mighty close with his films. When it comes to audio, however, Too Dark Park takes the cake. There are some other worthy contenders out there, particularly from the depths of atmospheric/ambient black metal; but none of them have carried the same twisted punch for me as Skinny Puppy's magnum opus.

Like many out there, my introduction to "industrial music" largely consisted of binging Nine Inch Nails on my discman. It's not a bad way to go, but thankfully one fateful day I decided to dig a little deeper. Trent Reznor had listed Skinny Puppy as a primary influence, so I figured why not start there? While my mind was not quite ready for my first listen to "Convulsion," my terror and confusion joined to create a morbid fascination with something unlike anything I had heard before.

The pulsating, gyrating soundscapes, screeches, and horror movie samples at first just struck me as noise. But there was something so welcoming at the same time. "He's seeing monsters. He is losing his mind, and he feels it going." That sound clip is such a perfect summary that I have to wonder if it inspired the entire album to begin with. Pounding electronic drums create various hypnotic patterns while Ogre's distortion-heavy, stream of consciousness vocals seem to come from all directions.

That's just the first track. Fortunately, this entire album is ultimately as catchy as it is dark and haunting. A little acclimation and further exploration within the annals of the genre helped me realize that like my real nightmares, Too Dark Park makes perfect sense in context. Tracks like "Tormentor," "Spasmolytic," and "Morpheus Laughing" are almost danceable despite the cryptic, occasionally disturbing lyrics and intimidating tone. I mean, you COULD party to a song about animal experimentation...if you're into that sort of thing.

Then there are the more downtempo tracks like the ambient keys and improvisational drumming of spiraling closer, "Reclamation," or the bouncy synths and almost whispered warnings of "Nature's Revenge." But really, my favorite moments are when Ogre, cEvin, and Dwayne (R.I.P.) seem to collectively lose their shit. "Waste the given gift!" screams Ogre to the sounds of distorted, disjointed melodies like some mentally ill, apocalypse nut on "Shore Lined Poison." What will be calm and ordered 90's electronica one moment will give way to sickening howls and fire alarms.

This is an album that honestly warrants a track-by-track review, but I will play by the rules. Suffice it to say that this is by far my favorite industrial album and one of my favorite albums of all time. It's one of those albums that made such an impact on me that I can still remember the first few times I spun it and the visceral reaction that followed. Too Dark Park is an album that may not make sense at first, but the avid industrialist will assure you that this is actually club-worthy-accessible when compared to the likes of Throbbing Gristle and other fore-runners. Either way, it's just under 40 minutes of bliss for me. Be sure to also check out VIVIsectVI and the rest of their discography.