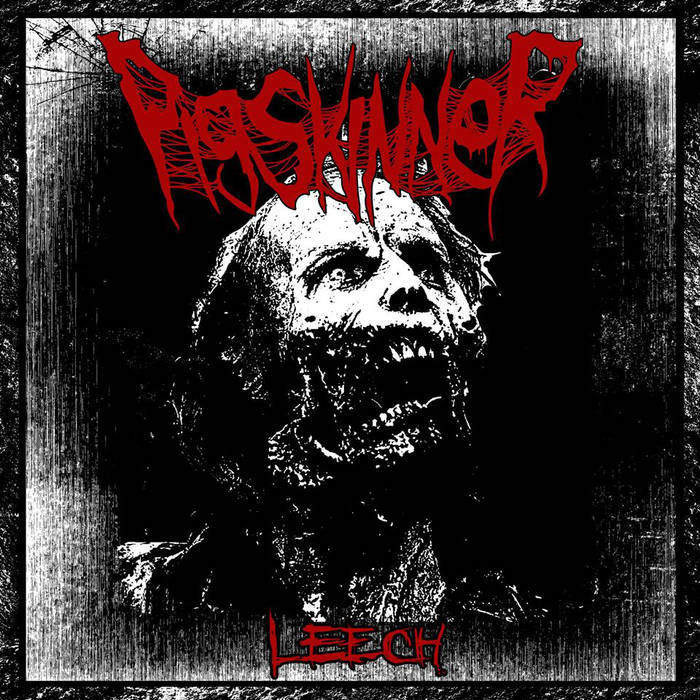 Grindcore, brutal death metal, metallic punk: these are the main ingredients that go into a band like Pigskinner. A band intent on nothing less then rocking out and, well...probably skinning pigs. My brother-in-law is in law enforcement, so hopefully they mean of the animal variety. Either way, this project with a traditionally American style is actually coming to your eardrums from Athens, Greece. A one-man project put together by the rightfully named Johnny Shitkicker, Leech is worth setting aside a few minutes and grabbing a six pack.

What's really left to say? The vocals are a contemptuous, guttural grunt straight out of the brutal death camp. Good luck deciphering any lyrics on this one. I hate to keep making the same pun, but you'd have better luck translating for a pig being skinned alive. You won't have much time to scratch down any notes either considering songs stick to the grindcore ethos that any song over 1:30 is garbage. After all of the lengthy prog I've been peddling lately, you'll have to spin this at least twice to even comprehend a single track.

But the real star of the show here is the guitar. The drums certainly have the perfect production and presence for a recording such as this. The D-beats keep the blood flowing, and those sustained cymbals that close out some of the tracks are the perfect finishing touch. But damn those riffs are groovy for a grindcore record. I am pretty choosy about this genre, considering (at least to my ears) a lot of them sound the same. Leech caught my attention for having that perfect fusion of dirty, southern-influenced hookiness that made Pig Destroyer's Terrifyer a fast favorite for me. If I'm going to get beaten to a pulp, I at least want to go down with a shuffle in my step.

So if that all sounds right up your alley, you can pick up the album for 3 Euro. Johnny will be quite thankful for your contribution, and I am sure it will go towards all sorts of future debauchery. If you like punk, grind, or death; you need to hit play now. Don't forget to crank the volume.