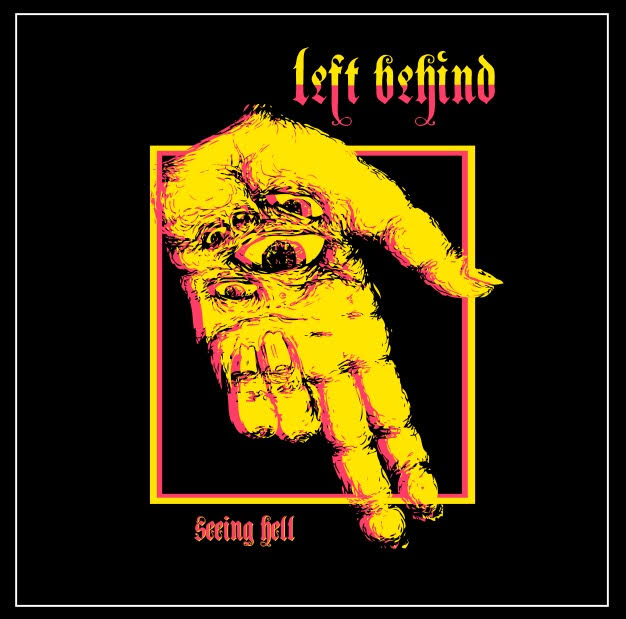 Seeing Hell
by Left Behind

Ever listened to Helmet and said, "hm...this is great, but could it be heavier"?  Well wonder no further.  West Virginia's Left Behind are a metallic hardcore band that seem to represent an alternative timeline branching from 1990's Strap it On.   The band keeps the groove and some other stylistic hallmarks, but really plays up the loudness factor both in instrumentation and vocal delivery.  If you ate up the death metal influence on Wolf King's Into the Infinite, you will bow before Seeing Hell.

If a band ever took it to 11, this is the one.  This is a start to finish assault on the eardrums.  The vocals are deep, abrasive howls not dissimilar from The Apex.  Rather than just pairing death and hardcore, the delivery is a perfect mixture of the two.  Neither genre manages to overpower the other, keeping a righteous balance of metallic punk ethos with commanding brutality.  "It's hard turning down the drinks of the devil!"  Great lyrics.  "Rock Bottom" and "Convulse" are impressive alone on this factor, but Left Behind are not content to stand on the merit of just one member.

There have been a lot of bands of late that utilize this Ballou-esque style of distortion from Black Breath to Hellsworn.  It's become a bit of a joke that everyone wants to use it at this point.  But there is nothing amusing about how Seeing Hell harnesses it's sludgy wrath.  The guitars are a wall of pure destruction that don't just raize everything in their wake, but also bury radioactive waste and salt the earth.  Between this and the acid-in-your-face of the drums, the result is demonical.  I can't wait to catch these guys love (take note, Left Behind, it's Portland or bust).

It should come as no surprise right now that I am extremely impressed with Seeing Hell.  From their default delivery of just "f#%k you!" to the inhuman, broken churning outro of "Gag," to the Every Time I Time curveball on "Vexed," this is just the one.  I keep listening to albums this year across all genres and think to myself "it can't get any better than this."  And yet dozens of times over, I have said just that in review only to have groups continue to top my expectations.  There's a lot of hatred in the air this election year, and it seems to be having at least one positive side effect.  Thanks for the great metal, candidates.