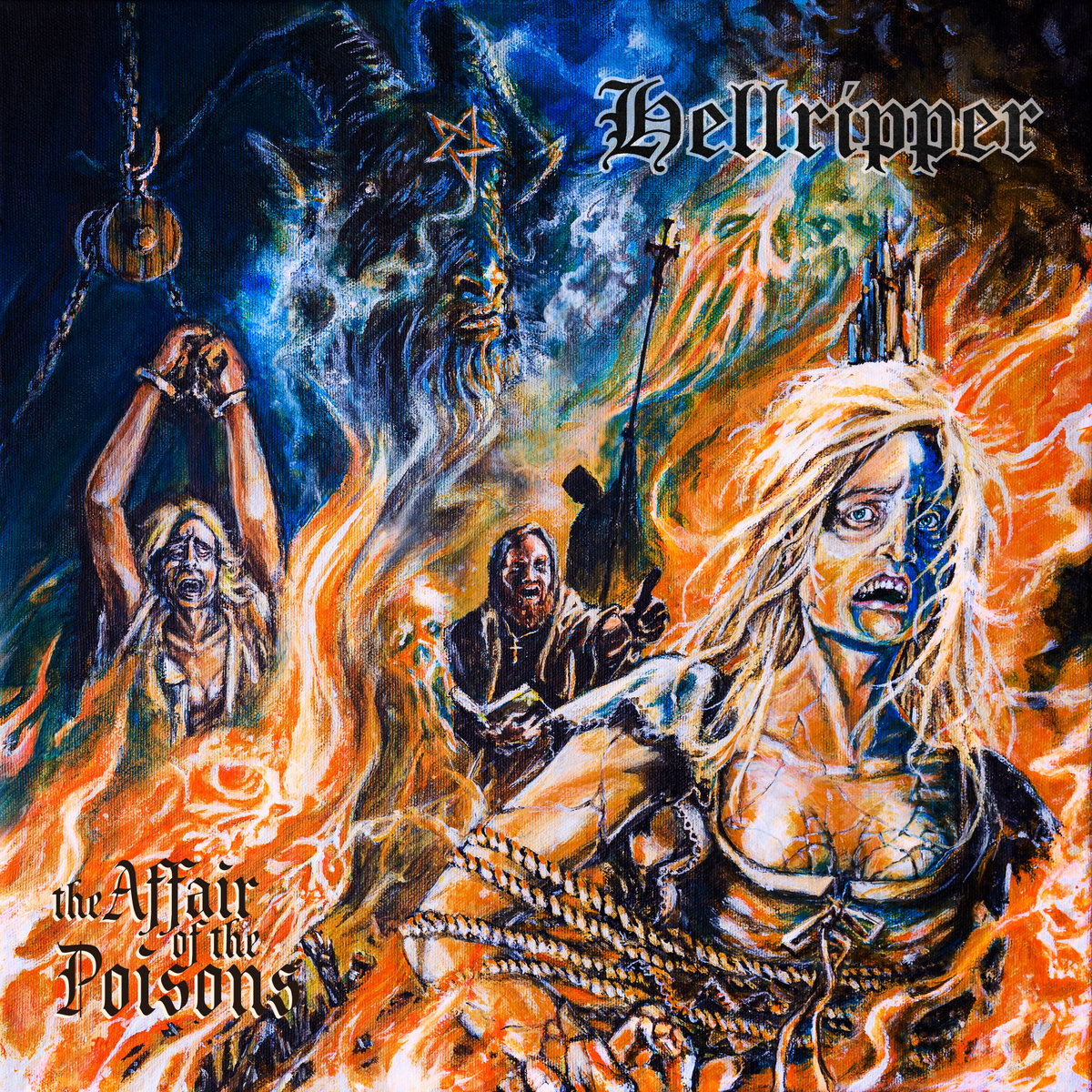 The Affair of the Poisons
by Hellripper

Since bursting onto the scene in 2014, Hellripper has maintained a steady stream of black/speed metal for listeners, putting out EP’s, splits, and albums on a yearly basis.  Founder James McBain has had a knack for fast paced, short songs that capture the fire and spirit of the genre’s early days, grabbing you with immediate hooks and not allowing them to overstay their welcome.  This approach has continued on Hellripper’s second full-length The Affair of the Poisons, which once again provides one scorching riff after the next and blurs the line between everything old-school metal.  It’s a fun ride from start to finish that has some top-notch riffs that are likely to stick with listeners for some time, making it clear that McBain is more than capable of writing quality material even when his pace is so quick.

At just shy of thirty-one minutes, The Affair of the Poisons doesn’t give you much time to catch your breath as it flies through one high flying song after another.  Hellripper’s continued to take influence from a fairly wide range of heavy and speed metal bands, as well as a healthy dose of Motörhead and as a result the speed and fury of the riffs is likely to have you wanting to start an impromptu mosh pit in your home as soon as you hit play.  While McBain is hardly reinventing any element of these classic styles, much like Midnight and Speedwolf the idea here is to capture the same insane level of energy and hooks that made these genres thrive in the 80s.  While the tempos remain fast and furious for almost the entire album, with closer “The Hanging Tree” slowing things down ever so slightly, there’s a good deal of variation to Hellripper’s writing and this prevents the songs from blurring together.  Depending on what track you’re listening to you might get hit with thrash, heavy metal, black metal, or some straight up rock ‘n roll.  “Vampire’s Grave” even goes full-on Motörhead, complete with a very Lemmy sounding “alright” delivered from McBain at the beginning.  Despite how frequentlythis band puts out material, there’s a clear understanding of how to keep the energy level at a high throughout and the power of a catchy hook and The Affair of the Poisons manages to impress for its entire run-time.

The vocals add a noticeably abrasive edge to Hellripper’s music, as McBain has a higher pitched scream/snarl that feels so raw and jagged that it could cut right through your speakers with ease.  There’s a very frantic and unhinged feel to the performance that channels the same intensity and over the top nature as some of the earlier South American metal bands, which adds immensely to the appeal of this material.  Where groups like Midnight and Toxic Holocaust have often had their vocals front and center on their recent recordings, The Affair of the Poisons doesn’t provide the same amount of separation and lets the two elements battle it out for your attention.  The overall pitch may not deviate significantly over the course of the album, but there’s something about how abrasive and energetic the performance is that will keep you coming back for more.

There are plenty of speed metal and black/thrash bands around the world vying for your attention, but when you get an album that channels the overwhelming intensity and sheer quantity of killer riffs that defined the classics from the 80s you know you’ve found a special one.  Hellripper’s hardly going to win any points for innovation, but I can’t get enough of this album and the songs are up there with the likes of Midnight’s Satanic Royalty and Speedwolf’s Ride With Death.  The fact that McBain can release material so often and have it be this strong is a testament to his skill, and I expect to see this one mentioned quite a bit when it comes time for year end accolades.  The Affair of the Poisons is available from Peaceville Records.