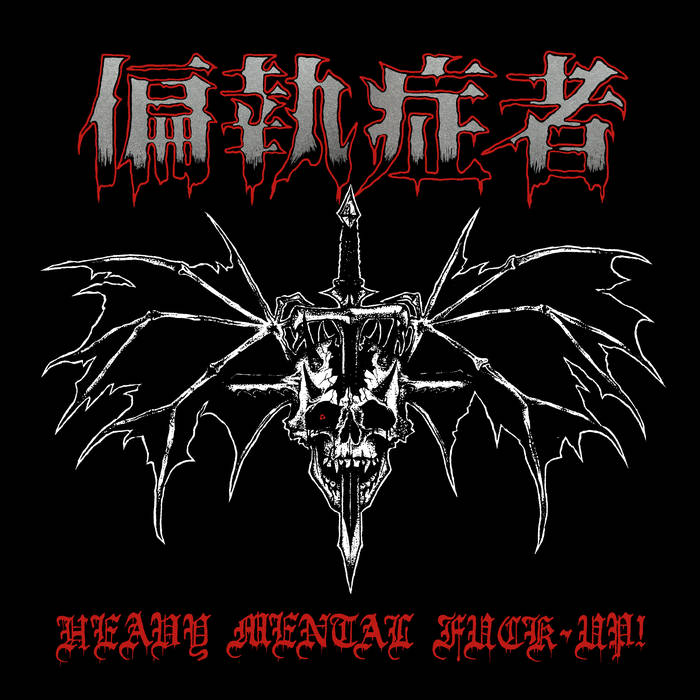 Sweden’s 偏執症者 (Paranoid) has been keeping busy since the release of their debut full length Satyagraha back in 2015, putting out EP’s containing both original songs and Disclose covers to keep listeners hungry for more of their take on Japanese/Swedish d-beat/punk and Venom style black/speed metal.  Now the group has returned with their second full length Heavy Mental Fuck-Up!, which changes up the production values slightly but still offers up more of the punchy riffing and precision that made their previous material so appealing.  It’s not a drastic reinvention of what 偏執症者 (Paranoid) has been doing from the very beginning, but there’s still plenty of substance to keep any fan of d-beat satisfied.

One of the biggest differences between Heavy Mental Fuck-Up! and its predecessor is the guitar tone.  Satyagraha had the type of noisy guitar that was so raw and abrasive it felt like it was going to cut through your eardrums, bringing bands like G.I.S.M. and Framtid to mind.  This time around the guitar work isn’t quite as noisy, utilizing a slightly more balanced mix that emphasizes the drums and bass just as much as the guitars.  While it’s not quite as abrasive there’s still plenty of intensity and you can feel the drums beating right into your chest at higher volumes, which is exactly what one should want from their d-beat.  The mix sometimes reminds me of Tragedy, as there are some similarities to the way the bottom end pummels the listener but there are some melodic hooks standing slightly above them.  Songwriting wise 偏執症者 (Paranoid) hasn’t changed that much, as the material remains focused on fast paced and heavy hitting d-beat that doesn’t overstay its welcome.  There’s as much Venom and Motörhead to some of the tracks as there is Japanese hardcore, but listeners will find enough substance to the record to make them want to return.  Admittedly a few of the later songs do blur together a bit, but the swagger of numbers like “Syuugeki” and “Daigyakusatsu” work in the band’s favor and help the album stand out a bit more overall.

Even when their recordings were at their noisiest, one of the biggest differences between 偏執症者 (Paranoid) and other bands of this style was how prominent the vocals were.  Where a lot of other d-beat and crust punk acts had a tendency to bury their vocals in the wall of sound, these guys had them separated from the instrumentals.  This is once again the case on Heavy Mental Fuck-Up!, as the screams boom over top of the record with an immense amount of force.  I have noticed that the approach to the vocals has changed over time, as the main pitch throughout this album is a fairly low pitched scream/shout that’s closer to last year’s Praise No Deity than Satyagraha.  It does seem a bit more one-dimensional at time, but you can’t knock it that much when the energy level is this high from beginning to end.

On their sophomore full length 偏執症者 (Paranoid) has scaled back the noise level slightly and continued their precise d-beat attack.  While it hasn’t quite managed to grab me in the same way that Satyagraha did three years ago, there’s still plenty of noteworthy riffs to keep me coming back and these guys continue to do the style justice.  Heavy Mental Fuck-Up! is available from The Sign Records and Konton Crasher, with the CD version offering two bonus track compared to the vinyl/digital release.