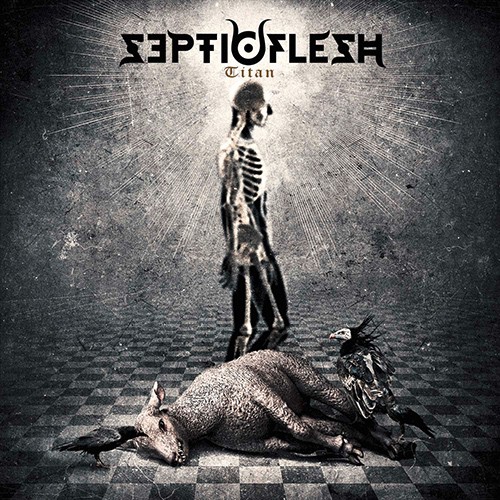 Haters move along, this is a Masterpeice

I am tempted to leave this review blank. Words cannot express how good this album is. But I will try.

Say what you will about Dimmu Borgir, but as far as nailing the symphonic metal genre down, you have to admit that few do it so well. But Septic Flesh, with Titan and the also excellent The Great Mass, are poised to supplant the throne.

When I put an album in my library, I spend the first few listens rating the songs so that I know which ones I will be fitting onto my portables. I have a lot of music, and never enough space to hold it all. With Titan I quickly found myself awarding five stars to every single track. There is absolutely no filler here. The mark of a truly great album for me is that it manages to let every song stand on its own merits while creating a greater sum of the parts at the same time. Titan succeeds at this in spades.

I could easily find myself hitting random and jamming to "Order of Dracul" or the even more epic "Prometheus." But I will be tempted each time to play the record from start to finish to recapture the cohesiveness of it all. There is a theme that permeates each track. There are some recurring passages in the orchestral arrangements, some subtle and others purposefully in your face (horn blasts anyone?). The tone is consistently dark and depressing throughout. Yet it is not in the way that leaves you feeling melancholy afterward. Rather, I find myself feeling inspired to face the darkness head on.

Albums like this sometimes fall victim to lack of differentiation. You will not be bored here. Despite the consistency, every track sounds different. I find myself humming different string arrangements and actually remembering to which track they belong. The vocals are some of the strongest death metal style you will ever here. Every growl is filled with malice and intense longing. No raspy, devil-may care shrieking. There is a sense that each snarl was painstakingly placed at just the right moment with just the right volume and tone to fit the orchestration. It is another instrument. When the title track hits the first “TITAN!” you will be on your feet. There are also some beautifully eerie female choir vocals mixed with monk-like chanting that further add to the mood.

The guitars are gloomy and intense. There are some faster moments, but there is a lot of doom influence on this album. Not in the sense of repetitive plodding, but in the pacing and choice of distortion. The whole band has truly honed their various crafts. The drums range from slow, echoing power, to blastbeats and rapid fills of utter perfection. I can't say enough about how crushing this album is. It is constantly topping itself. This may be the house that Emperor built, but Septic Flesh have burned it to the ground, salted the earth, and built a death metal skyscraper on the foundation. The orchestration is equally fit for circle pits and a classical theater: death metal that is classy without sounding the least bit sold out.

Buy this album right now. It is somewhat of a pain to find due to the band being out of Greece and not well known. You'll likely end up paying $20+ for a digipak. But it is worth it. You even get a second disk with the standalone orchestral arrangements. This may very well be the metal album of the year, and if not it is at least in the top 5. Everyone should give this a listen, but particularly fans of Borgir, Emperor, Nokturnal Mortum, Behemoth's the Satanist, and to a lesser extent Vader's Tibi Et Igni.