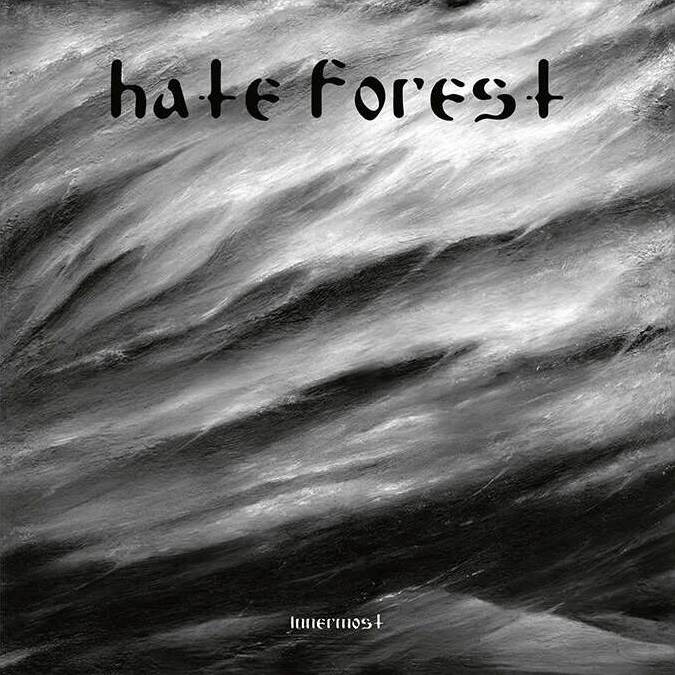 Roman Saenko has kept busy with so many different projects over the last few years that a revival of Hate Forest seemed unlikely, but that’s exactly what happened at the end of 2020.  Where bands like Windswept, Precambrian, and Rattenfänger saw Saenko collaborating with other musicians, this return to Hate Forest seemed like a solo endeavor and the resulting album Hour of the Centaur sounded like he was picking up right where he had left off fifteen years ago.  The Ukrainian band once again emphasized harsh and repetitive song structures that had a hypnotic and bludgeoning effect, and it served as a welcome return.  With 2022 seeing the release of a new Drudkh album and the ongoing war in Ukraine it seemed unlikely that we’d get more Hate Forest so soon, yet that’s exactly what Saenko did in December with Innermost.  This second comeback effort may not stray far from what the group has offered in the past, but the riffs once again get under your skin with their abrasive chill and provide plenty worth returning to.

What I’ve always appreciated about this group’s discography is how quickly they create a wall of dense and abrasive sounds that feel like a blizzard smacking you directly you in the face, and that’s exactly how Innermost starts off.  Opening track “Those Who Howl Inside the Snowstorm” (which is appropriately named) has no time for intros, instead immediately hitting listeners with blasting drums and fast paced riffing that’s simple yet hypnotic in the way it weaves around your eardrums.  It’s a deceptively simple formula that has Saenko has utilized for a few decades now, but Innermost continues to demonstrate why Hate Forest is able to pull it off better than the imitators.  Even if the six tracks generally go by at a mile a minute and emphasize one or two key riffs per song that then twist and turn over this roaring foundation, the differences give them unique identities and elements that stand out over repeat listens.  There are melodies that give off a more triumphant and powerful feeling layered onto the abrasive foundation, and this time around Saenko has incorporated some acoustic guitar that gives slight respites from the attack on a few of the tracks.  You’ll first notice this on “By Full Moon's Light Alone the Steppe Throne Can Be Seen”, but it is best utilized on “Temple of the Great Eternal Night” which pauses at just the right moments to let some cold and reflective tonality seep in.  It isn’t a radical departure to the Hate Forest formula, as elements of dark ambient and other instrumentation have been heard throughout their past discography, but it feels a bit different here.  Not every track stands out in this same way, as some keep the straightforward approach, but it’s on par with Hour of the Centaur and at some points even surpasses it.

Saenko’s vocal work is often recognizable thanks to how his growls are, which stand in stark contrast to a lot of black metal that uses higher shrieks and screams.  On Innermost you get a mix of those gutturals with higher shrieks, and the two often overlap in ways that keeps the intensity at a high for the entire album.  Again, there aren’t a lot of surprises for anyone that has listened to the likes of Hate Forest, Windswept, or Precambrian in the past, but the performance once again impresses with its sheer power and grit.  It’s also worth mentioning that even with the density of the instrumentation, Saenko’s voice stands tall above the layers and feels appropriately balanced in the mix.

I’m not sure if Hate Forest’s newer material quite reaches the same heights of Purity or Sorrow for me, but there’s no denying that Saenko’s approach to black metal continues to be appealing thanks to its hypnotizing effects and raw fury.  The way the acoustic elements are incorporated do help to break things up a bit more than Hour of the Centaur and while the remaining tracks to blur together, that’s to be expected given the band’s history.  It’s unclear how long Hate Forest will remain active for again or if it’ll once again fuse together with one of Saenko’s other bands, but those who like this type of unrelenting and straightforward approach to the genre won’t want to miss this effort.  Innermost is available from Osmose Productions.