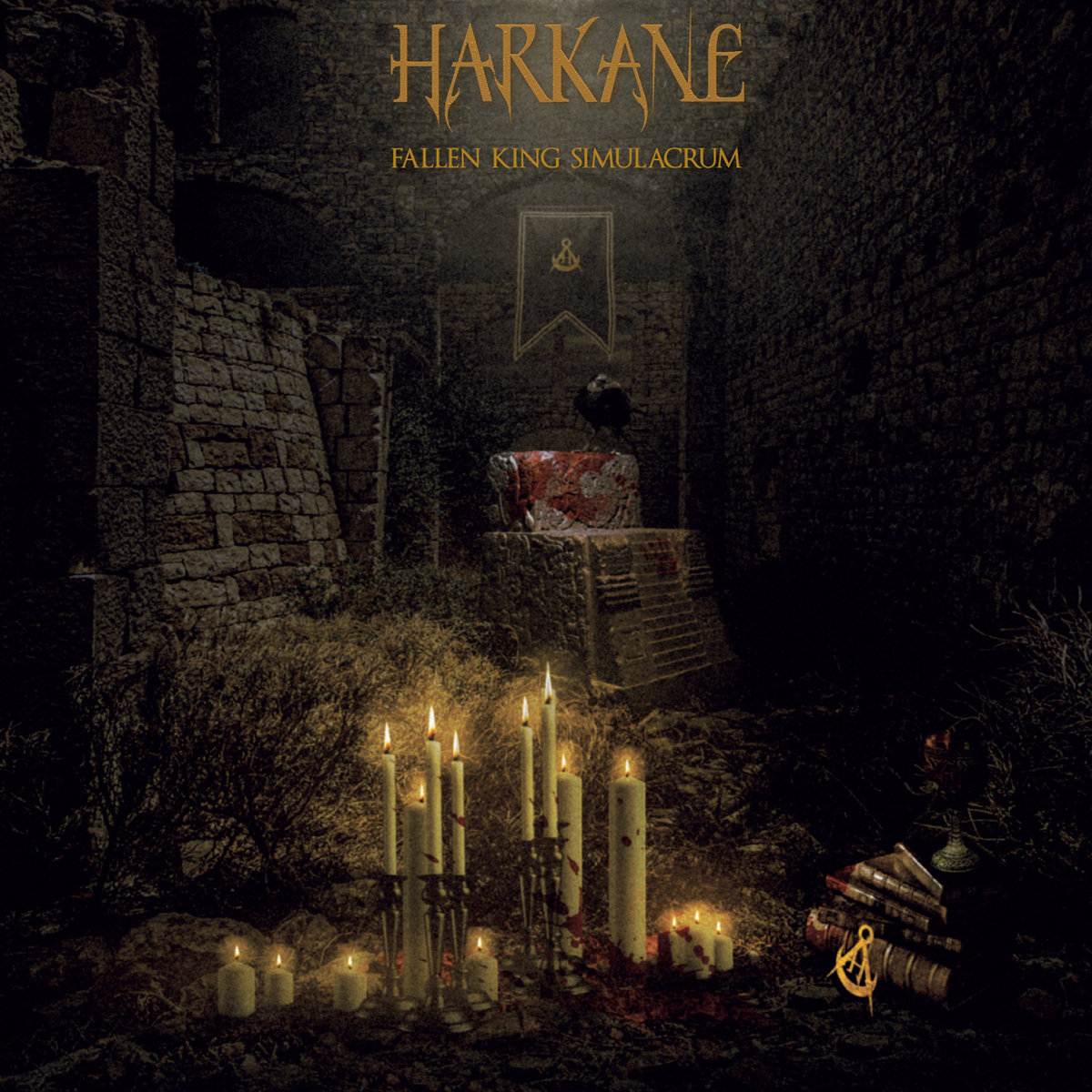 Formed in 2014, Italy’s Harkane channel black and death metal instrumentation with a healthy dose of powerful orchestration and otherworldly atmosphere.  Their debut Fallen King Simulacrum has been a long time in the making, as it follows up their first EP Extensus from five years ago.  Where that EP still had a rougher edge and more of a death metal tone, on the album they’ve exploded outwards with much fuller orchestration and booming, room-filling vocals and guitar leads.  Although the approach is familiar and does start to fall into a pattern by the end of the album, this is a well-produced and technically proficient effort that is sure still to appeal to fans of black and death metal that has a flair for the grandiose.

Where the orchestration seemed to be placed in a way that added some extra flourishes throughout Extensus, it’s been woven into the DNA of the band on Fallen King Simulacrum and plays a significant role in everything that they play.  Right from the beginning of opener “Requiem for a Heretic” you’re greeted by a sweeping orchestra and guitar, bass, and drums that come flying out of the gate with powerful blasting.  Admittedly the approach is familiar, as it recalls the more recent efforts of Septicflesh, Rotting Christ, and even Fleshgod Apocalypse at times with the highly polished production value and instrumentation that spends equal amounts of time bludgeoning you and exploring a haunting, otherworldly melodies.  Early on Harkane emphasizes speedier blasting that channels the thunderous power and bottom heavy tonality of death metal with some slower grooves, with the orchestral elements dancing over top of the rest of the instrumentals in a way that makes it feel like you’re listening to the score of a movie or video game.  It makes a strong first impression but after a few songs patterns start to emerge, with the band using similar build-ups and reaching familiar peaks which does make it a bit harder to tell them apart.  This does start to change with the interlude “La fraude des siècles” around the halfway point, which lets a haunting piano melody and eerie whispered vocals send you to dark and unknown places.  From there the material branches out a bit by incorporating some doom elements, and the moodier bass lines on “Howler in Darkness” recall some 90s gothic and death/doom elements at their best.  Fallen King Simulacrum is extremely polished and well-played with not a single awkward transition to be found, and while it does provide some immense peaks and stunning atmosphere I did find myself wishing the individual songs had a bit more to truly distinguish them from the album as a whole.

As you would expect from this type of room filling and immense type of black/death metal, the vocals are one of the most prominent elements throughout the material and Harkane’s lead singer has the intensity needed to match the rest of the band.  His primary style is a lower growl that retains a lot of death metal influence, but the pitch deviates naturally over the course of each song and keeps the performance feeling a bit more dynamic.  Other members of the group contribute some backing vocals during specific songs, bringing in some chants and higher pitched screams, as well haunting female singing that adds some more of that gothic flair on tracks like “Howler in Darkness”.  Where screams and growls can sometimes come through like an instrument of their own, Harkane has structured theirs in a way that’s a bit easier to make out and draws you into the storytelling aspects of their songs which definitely helps them to stand out a bit more.

Bands like Septicflesh and Rotting Christ have proven over the years that there’s plenty of appeal to highly polished and grandiose black and death metal, and while Harkane isn’t at the same level as those groups just yet they’ve showcased quite a bit of potential.  For their material to be this polished and fantasy soundtrack worthy on album number one is impressive, and there are some truly stunning and powerful climaxes that will draw in fans of the style.  But there are also songs that feel a bit too similarly constructed and start to blend together, dulling the overall impact just a bit and leaving me wanting the group to branch out just a bit more similar to the tracks towards the end of the album.  Fallen King Simulacrum is available from Dusktone.