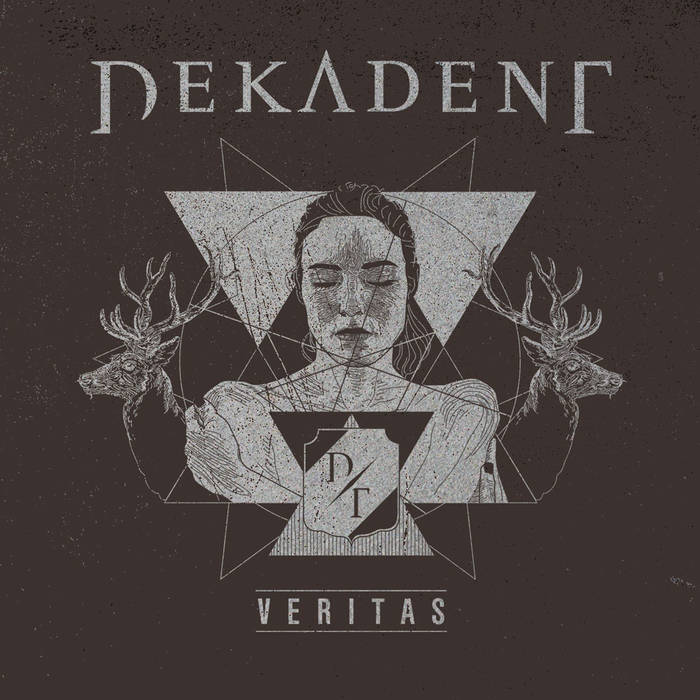 Hailing from Slovenia, Dekadent play a unique brand of melodic death and black metal. Seemingly fed up with record labels they describe on their page as having screwed the group over more than once, they have taken it upon themselves to record this album without such restraint through crowd-sourcing. The end result is something listeners will need to judge for themselves. But be prepared to block out some time, because one spin just isn’t going to cut it.

There is a lot to love on this album. My fellow Metal Stormer, ScreamingSteelUS, hit the nail on the head when he compared the opening moments to a Pink Floyd piece. The acoustic guitar, chord progressions, trippy synths, and subtle Hammond organ all remind me of "Eclipse," "Brain Damage," and even "Comfortably Numb." These are far from the only rock fusions Veritas has to offer. There are squealing solos, emotional bridges, and some absolutely gorgeous clean singing fit for an arena. Yet not unlike Enslaved’s In Times, these elements are all united in such creative ways as to never make this sound like some death/black n’ roll hybrid.

Quite to the contrary, the end result is a dense wall of sound filled to the brim with melody and an ever-present sense of weight. One need only hop over to bandcamp and listen to “Dead Mountain” to see what I mean. This absolute masterpiece was what put the album on my radar to begin with. From the cascading, sorrowful guitars to the alternating cogent growls and haunting singing; this track nearly brings me to tears every time. I liken it to a more progressive take on last year’s “While We Sleep.” While there are other instantly likeable tracks like “Pasijon” and “Valburga” (the album’s two non-English outings), I do feel as if the single sets the bar so unreasonably high as to make the rest of the album somewhat pale in comparison. Fortunately, the plethora of textures provided by the varied drumming, piano compositions, and rock interludes keep things moving along in a very engaging way.

While Verita’s diversity of tempos and moods provides a nice range, my one qualm is that transitions between these parts can occasionally be a bit clunky. This is best exemplified with “Enervation’s End.” Not only does the opening riff clash jarringly with the closing of the previous track; it is just plain annoying. Dekadent have some very clear songwriting strengths, so it is puzzling to me how such a below-par piece was allowed to recur multiple times right in the center of an otherwise solid album. The song is not without merit: I enjoy the pendulous synthesizer and double bass as well as the acoustic breaks. Unfortunately the amateurish guitar and vocals of the other parts are so cringe-inducing as for me to hit skip more often than not.

But in the end, this one blow is far from enough to sink the ship. Rather, I consider Veritas to be a brave and fruitful excursion that certainly will deserve recognition at the year’s close alongside Enslaved, Death Karma, A Forest of Stars, and Leviathan. The clear amount of work-ethic and DIY philosophy show in its distinctive compositions, exceptional showmanship, and willingness to explore new territories. I am told the album should be up in full on bandcamp at some point, but in the meantime you can check out the single and order the album from their website.