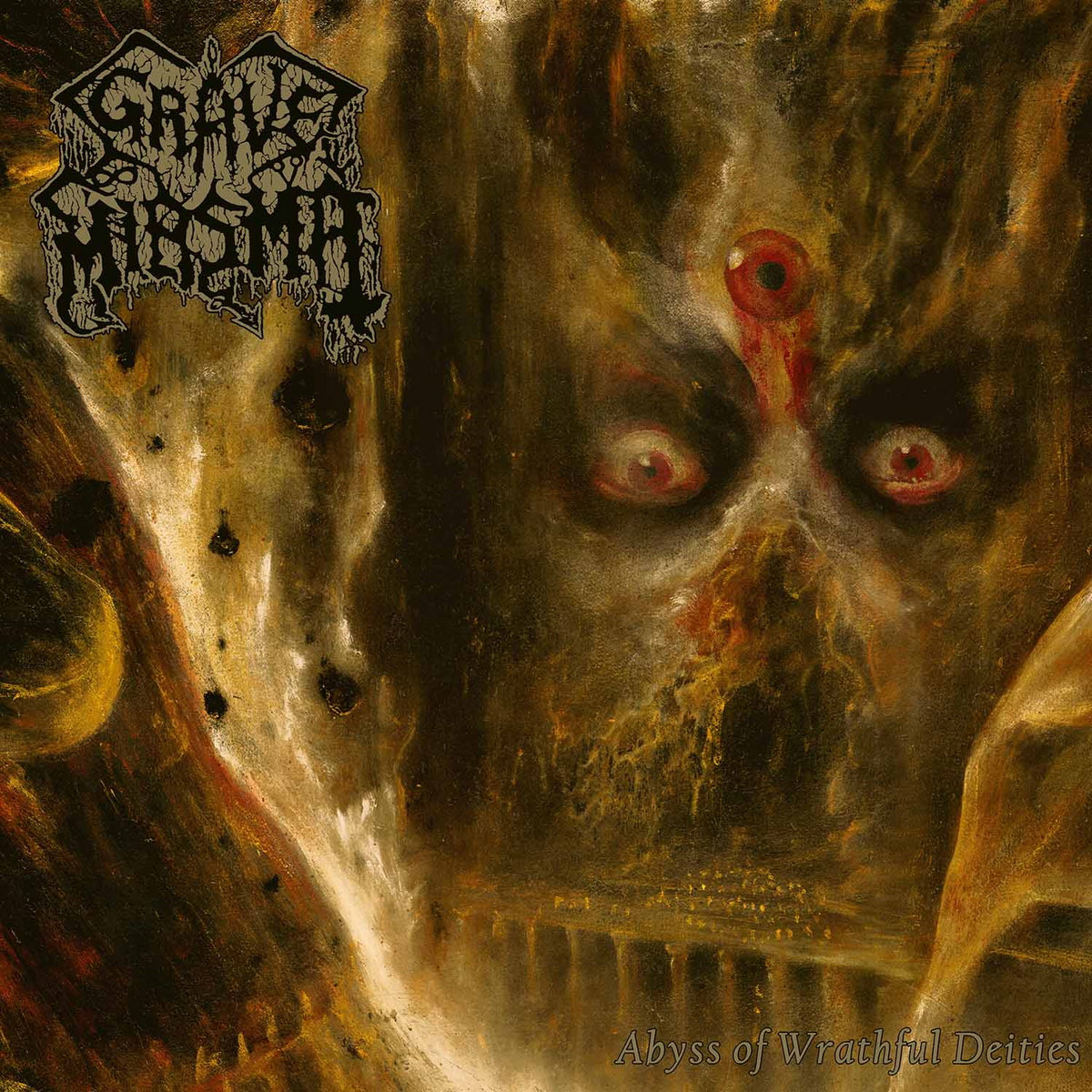 Alongside bands like Dead Congregation and Cruciamentum, Grave Miasma has released some of the more powerful and substantial death metal to come from outside of the United States.  Like some of the others that rose in the early 2000s, Grave Miasma started off on a murky and cavernous path that emphasized atmosphere and density just as much as the almighty riff.  In recent years the group has opened their sound a bit more, allowing more clarity and emphasis on the riffs themselves on 2016’s Endless Pilgrimage.  This approach has carried over to their second full-length Abyss of Wrathful Deities which uses its clarity to create a swirling and dark soundscape that’s methodical in its craft.

The sheer number of riffs is likely what a lot of listeners will focus on during that first time through, but one of the first things I noticed was the shift in the vocal approach.  Compared to the band’s earlier releases, the pitch skews a bit towards higher, raspier screams with a bit less of the low growls than before, and everything is wrapped in a considerable amount of vocal distortion.  Sometimes the way the vocals reverberate reminds me of the same approach some power electronics and death industrial artists use to distort their voice, and while there were some hints of this on Endless Pilgrimage it has been significantly amplified on Abyss of Wrathful Deities.  I imagine some people are going to prefer the more maniacal and room filling moments from Odori Sepulcrorum, but the performance here suits the added clarity and the methodical, ritualistic cadence of the instrumentals.

If you missed Endless Pilgrimage and your main experience with Grave Miasma has been their full-length and earlier EP’s, the clarity of the recording is one of the biggest noticeable differences.  This makes sense as it seemed like the group had reached a peak for cavernous and murky death metal on Odori Sepulcrorum, and now they’ve pushed ahead towards more expansive territory without losing their foundation.  The songs still have an ebb and flow that pushes the atmosphere to a thick and room filling level, and the way that the guitars and bass bend and twist around the rhythmic foundation proves compelling on each one.  Grave Miasma’s greatest strength has always been their ability to take the ritualistic and downright rabid roots of South American death metal and merge it with the swirling technical edge of American bands like Morbid Angel, and with the details brought to the front this allows Abyss of Wrathful Deities to really get under your skin.  You’d think that cleaning things up would cause some of the intensity to diminish, but there’s still a considerable amount of weight behind each drum hit and guitar riff.  With a mix of sprawling atmospheric passages that are dark and otherworldly alongside pummeling and much faster paced ones, there’s an attention to detail that makes this album engaging from beginning to end despite its almost hour-long length.

While a lot of newer death metal has used murkiness and layers of noise to hide riffs that feel too plain, Grave Miasma has always backed up their density and cavernous style with substance.  This has continued this latest release, which now puts the riffs front and center while building to a darker and more sinister atmosphere.  Some may still prefer the earlier production choices, but regardless of where you fall this material will keep you coming back for another leap into the unknown.  These guys are also one of the few in this genre that can pull off an album this long without it feeling needlessly bloated or repetitive.  Abyss of Wrathful Deities is available from Dark Descent Records and Sepulchral Voice Records.